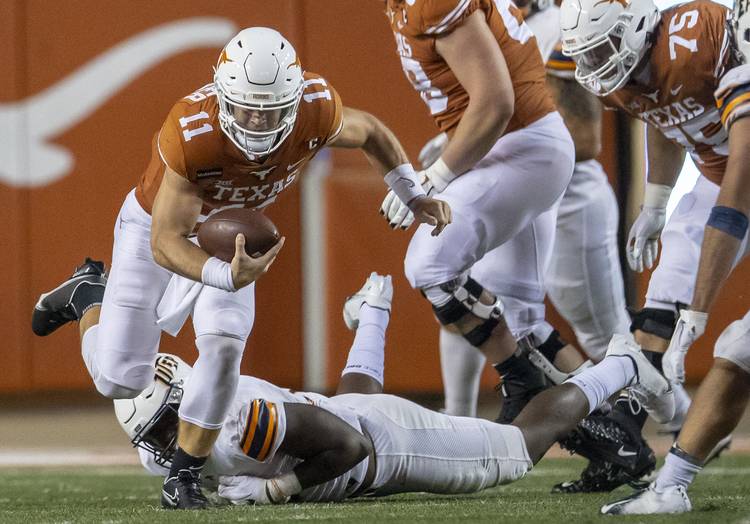 Sam Ehlinger had called it a night on Saturday, and it was only 9:48 p.m.

Up by 42 points in what would end up being a 59-3 season-opening win over UTEP, Texas pulled its senior quarterback ahead of the Longhorns’ second drive of the third quarter. It capped a career performance for Ehlinger, who threw for 426 yards and five touchdowns in the blowout.

It was the third-best passing game in UT history. And only Colt McCoy has thrown for more touchdowns in a game.

So, how did Ehlinger feel after the big night?

“To tell you the truth, I’m actually pretty disappointed,” Ehlinger said. “I left a lot of throws out there that I should have made. I can’t wait for the bye week to continue to get better.”

Why was Ehlinger disappointed?  Well, he was unable to connect with a receiver in the end zone on three occasions during the first half. Texas settled for a field goal and a missed kick on those two possessions.

Ehlinger was nitpicking, though. He completed 25 of his 33 passes. And since he only threw it once after halftime, he did his damage in the first half.

His 78-yard touchdown pass to Joshua Moore opened the game, and the fourth-year starter later had a scoring toss to Kai Money with six seconds left in the first half. The throw to Moore marked the first touchdown for UT on a season’s first snap since 2004. Money, meanwhile, recorded the first offensive touchdown by a walk-on since 2005.

Between Moore and Money’s touchdowns, Ehlinger attempted 30 other passes. He completed 22 of them. He connected with nine different receivers during the first half. Tight end Cade Brewer and graduate transfer receivers Brenden Schooler and Tarik Black all scored off one of his throws.

“The numbers talk for themselves,” left tackle Samuel Cosmi said. “(He ran) the offense like he wants it to and coach (offensive coordinator Mike) Yurcich wanted for this game. I think he did a phenomenal job.”

According to UT, Ehlinger’s five touchdown passes were a first-half school record. So were his 424 passing yards.

For a comparison, Major Applewhite’s 473 yards in the 2001 Holiday Bowl is the standard at UT. In that game, Applewhite threw for 207 yards in the first half. McCoy, who threw for 470 yards against Central Florida in 2009, had 222 yards at halftime.

Working with Yurcich for the first time, Ehlinger picked apart a UTEP team that won its opener but was still coming off two straight 1-11 seasons. In one of those losses last year, North Texas’ Mason Fine had seven touchdowns.

“I think that coach Yurcich’s schemes are incredible,” Ehlinger said. “I’m really excited with everything that he’s installed. We also left a lot out on the field. We have a lot to get better at. Certainly not a finished product by any stretch of the imagination.”

Last season, UTEP ranked 70th among the 130 FBS-level teams against the pass. Up next for Ehlinger and the Longhorns? A Texas Tech team that ranked 128th. Texas Tech is 1-0 after a 35-33 win on Saturday, but the Red Raiders surrendered 567 passing yards and four touchdowns to Houston Baptist quarterback Bailey Zappe.

The announced crowd was 15,337. Around 1,000 of those were students. UT announced earlier in the week that it would require students to pass a COVID-19 screening test before they would be admitted to the game. The cost of the $90 tests, which were done on Friday, were picked up by the school.

On Saturday, UT revealed that 1,103 of the 1,198 tests it administered came back with negative results. Texas said that students then claimed 1,051 tickets. Of those claimed tickets, 969 had been scanned by the game’s kickoff.

Thompson suffered a laceration on his ear. That cut short a night that featured Thompson grabbing the Longhorns’ first interception of the season.

Whittington injured his knee while trying to catch a second-quarter pass near the end zone. He finished with two receptions and a 15-yard run.

Herman said that Whittington would get an MRI on Sunday. Thompson received stitches at a local hospital, but Herman estimated that “it shouldn’t keep him out very long.”

Texas 59, UTEP 3: Our five questions for the Longhorns — answered