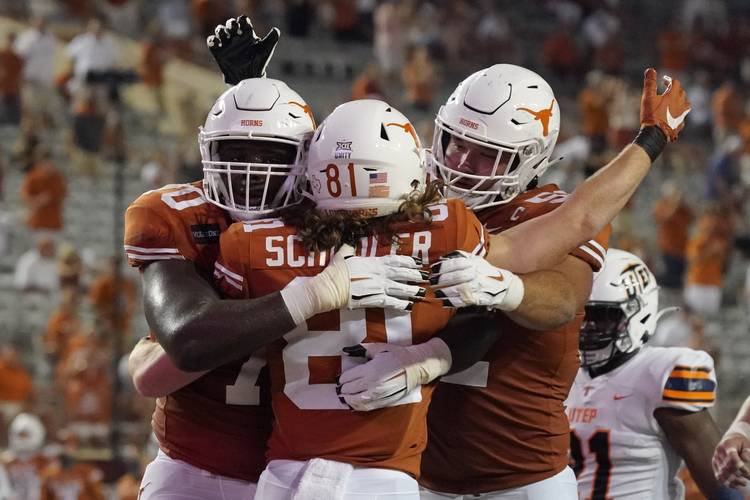 Texas’ season began Saturday night with a convincing 59-3 over UTEP. The Longhorns put the game away early, taking a 28-0 lead with 14:10 left in the second quarter.

Texas is 1-0 moving into the bye week. Next up is at Texas Tech on the last weekend of the month.

Sam Ehlinger entered this season as a Heisman hopeful, and if he keeps dominating opponents the way he did the Miners, he could end his career as Texas’ all-time passing leader. He set career highs with 426 passing yards and five touchdowns — in the first half. He completed 25 of his 33 passes. His first throw was a 78-yard touchdown pass to Joshua Moore. His backup, Casey Thompson, was 4 of 7 for 55 yards and a pair of touchdowns in about a quarter’s action. Even freshman Hudson Card played in the fourth quarter.

Season grade (one game): A+

Texas never asked its backs to dominate the game. Keaontay Ingram, last year’s leading rusher, led the team with nine carries for 44 yards. Roschon Johnson, the sophomore converted quarterback-turned-running back, started the game and finished with 38 yards on eight carries, including Texas’ only rushing touchdown. Freshman Bijan Robinon had five carries for 38 yards. Take away a backwards pass from Card to Malcolm Epps that was counted as a run, and Texas rushed for 169 yards on 32 carries. That’s an average of 5.2 yards per.

Season grade (one game): B

The group looked talented and deep. Seven different receivers caught a touchdown pass. It started with a 78-yard catch and run by Moore, who was the team’s leading receiver with six catches for 127 yards and a touchdown. Michigan transfer Tarik Black added five receptions for 80 yards and a score. Brennan Eagles caught only one pass, but it was a 35-yard touchdown. With Jake Smith out, Jordan Whittington got the start at slot receiver and caught two passes for 45 yards before leaving the game with a leg injury late in the first half.

Season grade (one game): A+

The tight ends looked solid. Cade Brewer, who missed time in 2019 due to injury, was the star at the night among tight ends with three catches for 40 yards and a touchdown. Brayden Liebrock, a four-star from the 2019 cycle, added two catches for 11 yards and made an important fumble recovery. Epps had a 40 yard run that was essentially a swing pass reception.

Season grade (one game): B+

It’d be hard to give the line any other grade. Ehlinger had plenty of time to pass the ball and was never sacked, and the running game averaged more than five yards per carry. The Miners only had two tackles for loss in the entire game.

Season stats: Sure, it’s early, but Texas ranks second nationally in total offense and passing, 12th in rushing and tied for first in scoring.

The starters played stout, sound defense early. Reserves Alfred Collins and Marcus Tillman each recorded sacks in the second half. Joseph Ossai led the team with eight tackles, including six solos and a quarterback hit. UTEP’s rushing attack managed just 43 yards on 31 carries, averaging 1.7 yards per carry. Guys like Keondre Coburn, T’Vondre Sweat and Moro Ojomo won’t show up on the stat sheet, but were great at winning the line of scrimmage and allowing the playmakers at the second and third level to clean up the ball carrier.

Season stats: Like the offense, UT ranks high in defensive categories, too — eighth in total defense, fourth in points allowed, fourth against the run.

DeMarvion Overshown looked like a natural linebacker in his first start at the position. He was recruited as an elite safety out of Arp. He provides some much needed speed and aggression at linebacker. He had four tackles, two of them for loss. Freshman Jaylan Ford looks like a real contributor; he had three tackles. David Gbenda added a pair of tackles.

Season grade (one game): B+

Texas wasn’t tested much in the back end against a bad UTEP squad. Josh Thompson did snag the game’s only interception. Sophomore safety Chris Adimora was second on the team with six tackles. D’Shawn Jamison had five, including a half-tackle for loss. Caden Sterns had four tackles. Kenyatta Watson II also looked good during his time at corner. UTEP completed less than 50% of its passes for 190 yards.

After five difficult months, No. 9 Texas allowed to relax after UTEP rout — for one day, anyway

The Dotted Line: As his season starts, safety JD Coffey is happy with his Texas commitment