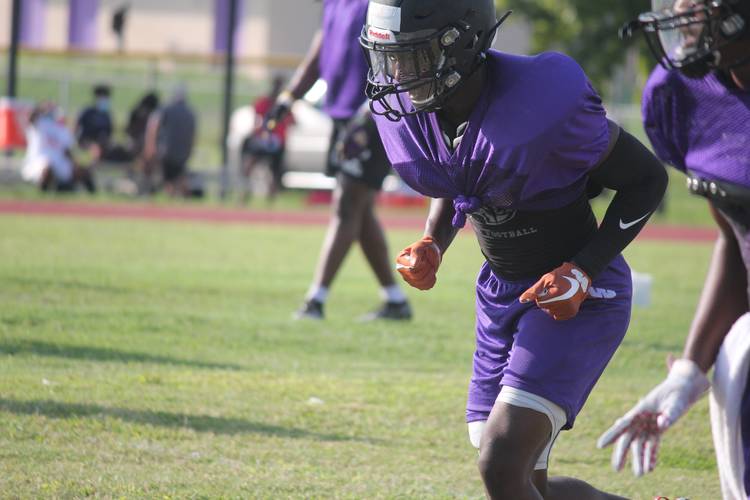 Texas target Andrew Mukuba began practice on Sept. 14, which is about a month later than normal. (Mike Craven)

Receiving phone calls from national championship coaches is a regular occurrence for four-star safety Andrew Mukuba. The Austin LBJ product is one of the top uncommitted prospects in the state and is being recruited by Clemson, LSU, Texas and Missouri. Not bad for a player who didn’t take football seriously until the eighth grade.

“It is a great feeling to get those first calls from coaches like Dabo Swinney and Tom Herman,” Mukuba said. “It was surprising. I didn’t start taking football seriously until the eighth grade year when I noticed I had the talent to change my life with this game. I was always faster than everybody else.”

Mukuba and his LBJ teammates put on pads for the first time on Monday. The Jaguars hope the return to full pads is a sign of normalcy in a world that now includes virtual schooling interrupted by afternoon practices. The season was supposed to start two weeks ago, but pandemic concerns forced the UIL to stagger the start for bigger and smaller schools. Although other Class 4A teams have started already, LBJ’s season was on hold due to ordinances laid down by local officials telling all Travis County schools that athletics had to be delayed.

“It feels good to be back out here with everybody,” Mukuba said. “It was kind of tough going through the pandemic and with the Black Lives Matter movement. I grew physically and mentally in the offseason.”

The 6-0, 185-pound playmaker has been watching with interest as the schools that are chasing his commitment have tangled with social unrest and a push by their players to be more vocal. And some of those issues players are speaking out against might not personally impact their coaches, Mukuba said.

“Most of the head coaches are white, so it is eye-opening to see some coaches actively care about making positive change and listen to their players,” he said. “I watch how the head coaches of each university deal with the issues of social justice.”

Mukuba was a two-way star for LBJ last year. He was District 12-5A Division I’s offensive newcomer of the year and a first-team all-district selection on defense. He caught 36 passes for 807 yards, but his future is at safety. That’s where he has picked up 35 offers and why he’s ranked No. 30 on the Fabulous 55.

“He leads by example,” said Omasha Brantley, LBJ’s offensive coordinator. “He’s one of the first kids out here. He leads the drills. He’s a quiet and humble kid, but he sets an example for his teammate. I love coaching him because I can count on him on and off the field.”

“He never let it get to his head, and that’s what you want,” he said. “He takes his recruitment seriously because he takes football seriously. He’s a mature kid.”

That doesn’t mean the process hasn’t been challenging. Mukuba said he has put recruiting to the side, concentrating on his senior season and virtual schooling. The challenges for recruits this year are unique to this cycle.

“It’s been a weird cycle because we can’t visit. It’s a lot of phone calls and virtual visits,” Mukuba said. “That does kind of give Texas an advantage because I’ve been there four times and I’m only 15 minutes away from campus. I haven’t visited the other three schools in my top four.”

The Longhorns want to pair Mukuba with fellow four-star safety JD Coffey. Texas’ class consists of 17 players and ranks 15th in the nation, trailing Oklahoma in the Big 12.