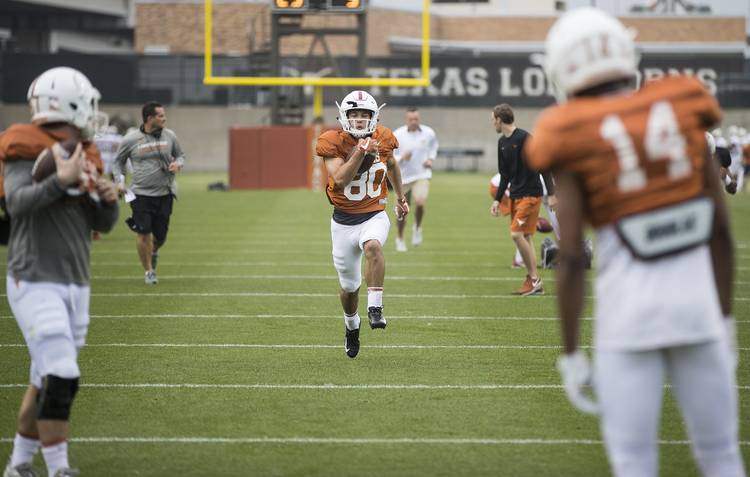 Texas receiver Kai Money (80) runs through drills during a practice at the Denius Fields in Austin on March 25, 2019. [RICARDO B. BRAZZIELL/AMERICAN-STATESMAN]

To hear his high school football coach tell it, Kai Money has a name that has been well-known in the Rio Grande Valley for a while.

Money is “a local celebrity down here,” Tino Villarreal said on Monday, two days after Texas’ walk-on receiver from Brownsville scored the first touchdown of his Longhorns career on a 6-yard pass from Sam Ehlinger.

Money’s father, Phillip, is from Edinburg and was the starting quarterback at Rice in 1983. Kai himself set several Valley passing records during his four years at St. Joseph Academy in Brownsville.

Now, Money has made a name for himself in the Austin area. With his touchdown catch — the fifth thrown by Ehlinger in the first half in the Longhorns’ 59-3 rout of UTEP — he quickly began trending.

“My mom wants (me) to date Kai Money & I’m not opposed,” one UT student tweeted.

“If I’m Kai Money, I’m walking down 6th Street with a Kai Money Texas jersey this weekend during the bye week,” another account suggested.

That attention on social media elicited laughter from Villarreal. The coach, though, wasn’t surprised that Money cashed in on his UT opportunity.

“It’s just such a long shot, going into one of the best programs in the nation as a walk-on,” Villarreal said. “I’ve always known Kai has had the physical ability to do it. He’s fast, he’s quick. He can hang within that level, I know that for sure. It’s just do you have the mental stamina to persevere because it’s going to be a marathon, not a sprint.”

For Money, that marathon started years ago at Saint Joseph. He threw 91 career touchdowns and was a four-time 1,000-yard rusher for the Bloodhounds. But aside from some FCS and Division II schools, the undersized private-school standout failed to gain much recruiting interest.

At one point, it looked like he would accept an offer from Houston’s track and field program and then try to walk on with the Cougars’ football team. But Money went into Villarreal’s office one day to announce that he was going to Texas. That was his dream school, and he had been saying since he was young that he’d be a Texas football player. He would just take his chances with a walk-on tryout.

In order to make it, he had to switch from quarterback to receiver, a position he had never played before. His private quarterbacks coach connected him with Jaxon Shipley, the former Longhorns star who now trains receivers himself. Money trained with Shipley when he got to Austin, even borrowing a friend’s car to get to some workouts.

“I started to realize after a month that man, he’s starting to get this thing down,” said Shipley, whose 218 career receptions still rank third in UT history.

By the time Money made it to campus, Texas had already held its walk-on tryouts. So he just trained with Shipley that first semester. After a successful tryout in February 2019, he was added to the roster. He practiced last spring and last fall, but did not play.

One year later, Money was given a chance to live his dream. Texas opened without starting slot receiver Jake Smith, who missed the game with a hamstring, and then Jordan Whittington injured his knee late in the first half. That opened up playing time for Money, who caught four passes for 26 yards. He became the first Longhorns walk-on to score an offensive touchdown since Ahmard Hall in 2005.

“I wish you guys could see the work that Kai Money puts in every single day,” quarterback Sam Ehlinger said. “What an incredible team guy, always puts the team before himself. … For that to pay off today, I couldn’t be happier for him.”

Back in Brownsville, Villareal was hosting a watch party for UT’s first game. Money had told his coach that he might play against the Miners, and that hunch was correct.

“Forget the touchdown and the playing time,” Villareal said. “To earn the respect and the love of your teammates, the way they celebrated him. For the top quarterback in the nation to give you some respect and love afterwards, that to me means a heck of a lot more than how many reps he got or how many footballs he caught. I’m very proud of Kai Money as a former member of my squad and what he represents.”

On Monday, Texas coach Tom Herman said UT invests a lot into its recruitment of walk-ons. He said that when he was hired, he was surprised by the subpar shape of the walk-ons program. John Michael Jones, the assistant director of player personnel at Texas, and Bob Shipley, the director of high school relations, were credited by Herman for shepherding the walk-ons. He also thanked former athletic director Mike Perrin for “stressing to the powers that be the importance of having a quality walk-on program.”

Texas has recently convinced some athletes to turn down offers from smaller FBS-level programs and instead join the Longhorns as preferred walk-ons. Then Texas has been able to fill out its roster with players like Money through tryouts.

Including Money, the participation report for the opener featured seven players who had joined the team as walk-ons. Linebacker Cort Jaquess made his second career start, and Justin Mader is in his third season as the deep snapper. Jarrett Smith got two fourth-quarter carries, Jett Bush recorded a tackle and Paxton Anderson was targeted once in the end zone. Kartik Akkihal, who attended nearby Vandegrift High, also played.

“I think we’re heading in the right direction with that program,” Herman said.

The Dotted Line: Austin LBJ safety Andrew Mukuba is ‘surprised’ by all the recruiting attention