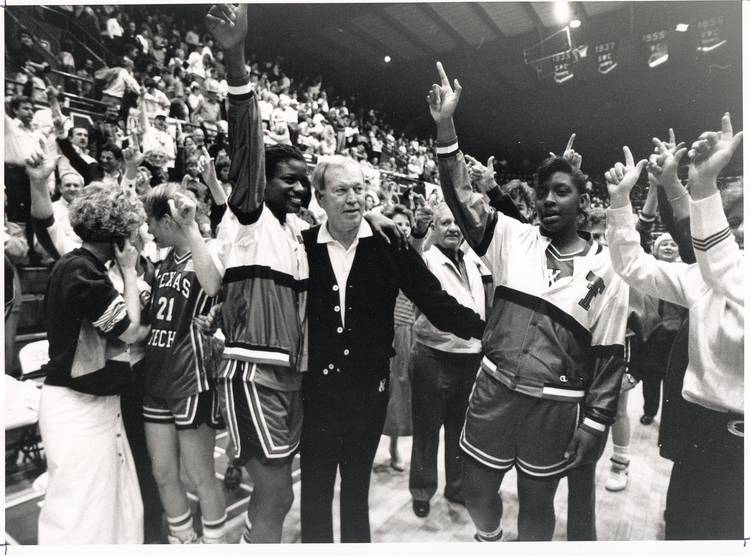 T. Jones, as Texas Tech athletics director from 1985 to 1993, hired popular coaches Spike Dykes, Larry Hays and James Dickey and helped put the Red Raiders in position when the Southwest Conference collapsed to be a part of the Big 12.

When football coach David McWilliams bolted Tech after one season to return to Texas, his and Jones’ alma mater, Jones took the blowback.

Jones was the Texas Longhorns’ starting quarterback in 1951 and 1952, leading the Longhorns to a Cotton Bowl win. He served as a Longhorns assistant coach from 1956-62 under Ed Price and Darrell Royal.

Advertisement
The former Southwest Conference player of the year died Tuesday after a multi-year battle with cancer, close family friend Jim Sexton said. Sexton, having spoken with Jones’ family, said he passed away at home in Horseshoe Bay. He was 89.

“T. did more for Texas Tech by turning the program around when he came here than any past AD we’ve ever had,” said Sexton, a near-lifelong Lubbock resident and Tech basketball letterman from 1951-54. “He was just a great guy, a great guy.

“T. Jones turned our program around, and he really installed a will to win out there that we didn’t have.”

“He was just a good person — integrity, honesty,” Myers said. “He dealt with people in a straightforward way, and he did a good job when he came here. He did do some good things, and that was pre-Big 12 days. We were in the Southwest Conference, and he didn’t have the budgets that we had after we got into the Big 12.”

Perhaps no Tech sport benefited more directly from Jones’ efforts than the baseball program. Jones came to Tech from being an associate AD at Texas, which at the time had made 24 trips to the College World Series and won four.

Jones hired Hays in 1987 and got lights installed at Dan Law Field, two moves that laid the foundation for a golden era of Tech baseball that continues today.

“He came at a critical time for Tech,” Hays said, “and had the ability to, for me, let a coach see a vision of what Texas Tech baseball could be.

“He was just a great administrator and one that coaches enjoyed working for. I know Spike had confidence in him, and I just appreciate what he did at Texas Tech when he was there. I hated the day he left, but to me, he was a key part of Texas Tech at a critical time, budget-wise.”

Perhaps more important, he oversaw a football program that had suffered six consecutive losing seasons when he was hired to one that became more competitive.

“He took over at a real critical time,” Myers said, “and had our sports up to the level that we were attractive enough to get in the Big 12.”

McWilliams led Tech to a 7-4 record in 1986, but resigned after the regular season to become head coach at Texas, bringing the wrath of Red Raiders fans down on Jones. However, his promotion of Dykes worked out.

Dykes led the Red Raiders to a 9-3 season in 1989, and even after they sagged back in 1990, Jones endorsed his coach with a 10-year contract and reaped stability. The Red Raiders shared the Southwest Conference championship in 1994 and went to the Cotton Bowl.

“I think a lot of people were down on T. for hiring a Texas guy that came one year and left,” Myers said, “but he probably made one of the biggest hires that anybody made when he hired Spike, because Spike pulled everybody together.

“Everybody liked Spike and his teams were good, and that was a really important period in our history of athletics, because Spike had football winning more than we lost. Our crowds were up. Our attendance was up, and that was one big factor in going to the Big 12. It was all about football.”

Jones also promoted Dickey to be head coach of the Tech men’s basketball team and, though Jones wasn’t still around for it, Dickey led the Red Raiders to a 30-2 season and Sweet 16 of the NCAA Tournament in 1996. In promoting Dickey to head coach in 1991, Jones asked Myers to step down, ending the latter’s 20 1/2-season tenure as coach.

Myers said Tuesday it was “a blessing in disguise,” as he eventually became AD himself from 1996 to 2011.

“I had a good relationship with T.,” Myers said. “I liked him and I thought he was fair. He had to reassign me, but I deserved to be reassigned. We had about four or five bad years right there. I didn’t resent T. for moving me over into … He made me an assistant athletic director, but I liked T. He was good. You knew where you stood with him.”

“He was a great, great college quarterback at Texas,” Sexton said. “And he was a plus, plus, plus for Texas Tech all the way. It was hard for people to believe that one of the Longhorns could come in here and be that loyal to Texas Tech.”

After Jones left Tech, Sexton said, “he was always, always very curious how Tech was doing. He’d call me about ballgames that Tech played. He was a Texas Tech fan and loyal to Texas Tech just as much as he was to Texas.”