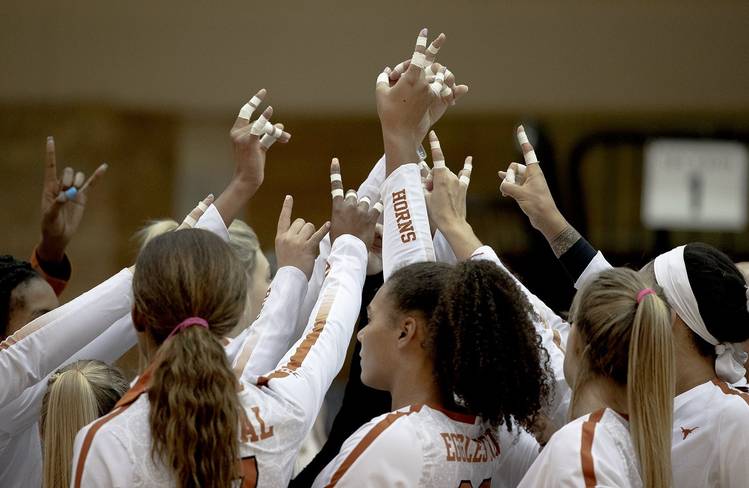 Texas volleyball players huddle together before a match against Minnesota on Sept. 4, 2019 in Austin. [NICK WAGNER/AMERICAN-STATESMAN]

Last week, the Texas volleyball team made it clear that it had something to say.

On Sept. 9, the program released a video on its website and social media platforms. Using a script written by third-year players Logan Eggleston and Asjia O’Neal, the 41-second, black-and-white video featured the players’ take on a Black Lives Matter movement that has been spotlighted throughout this summer.

“When I saw the final product, it was just so powerful,” Eggleston said. “Just to have our entire team together, all the Black girls on the team but also all the white girls and people who aren’t Black standing behind us and supporting us, it kind of gave me that emotional feeling. … That’s just how powerful our message was.”

Flanked by their teammates, the Black volleyball players took turns reciting O’Neal and Eggleston’s words in the video. At one point, freshman Madison Williams stated that “I won’t always be an athlete, but I will forever be a Black woman.” O’Neal hammered home the point that “All lives can’t matter until Black lives matter.” Eggleston implored those watching to join in the fight against systemic racism.

Perhaps the video’s most pointed words were directed at fans of the Longhorns. “If you care about me when I do this,” said Brionne Butler as a highlight played of her going for a kill. “Or when I do this,” continued Skylar Fields over a clip of her celebrating during the 2019 season. “You should care about us when we do this,” stated O’Neal in a voiceover as the video showed a picture of her and her mother at a protest.

When it comes to volleyball, Texas can claim one of the largest fan bases in the country. Nationally, the Longhorns have ranked fifth in average attendance in each of the past three seasons. After home matches, it isn’t uncommon to see younger fans surrounding their favorite players for pictures and autographs.

But earlier this summer, a divide was created. On June 12, several volleyball players participated in an athlete-led protest that aimed to address racial issues on the UT campus. The athletes’ protest included a list of demands, one of which was the nixing of “The Eyes of Texas” as the school’s alma mater. While the athletes were supported by some fans, they also received a lot of negative feedback.

“It just kind of showed us that people will support us when we’re playing and entertaining them but not when it comes to things about our race and not on the court,” said Eggleston, who is one of the team’s two captains. “We’ve seen so many examples of that throughout the summer.”

“Personally, I wanted to accomplish just being able to tell the fans and our audience that we’re not just all about playing volleyball,” O’Neal said. “We still have a stance on things that are happening in the world. It’s important, not even just our team, but for people to listen to all athletes and what they have to say.”

The protest by the Texas athletes and a summer of racial unrest led to many discussions, some of which were admittedly uncomfortable, on the volleyball team. At the time, the players were spread out across the country due to the coronavirus pandemic. O’Neal, for example, grew up outside of Dallas. Eggleston was at home in the Nashville area. The team’s roster also lists hometowns in California, Florida, Hawaii, Illinois and Iowa.

When the players returned to campus, they began brainstorming with Jocelyn VerVelde, an assistant media relations director at UT, and Adam Doyle, the team’s video producer, about how they could spread their message. The volleyball program boasts a large platform with 44,000 followers on Twitter and nearly 110,000 fans on Instagram.

After a video was green-lit, O’Neal and Eggleston spent two days writing the script. Both O’Neal and Eggleston have an interest in creating content. O’Neal has a YouTube channel while Eggleston wants to eventually start her own podcast. O’Neal said the first day of writing was a wash, but things got better after the two decided to “speak from the heart and not try to sugarcoat things or try to say it the politically-correct way.”

After Eggleston and O’Neal finished their script, the video was shot over the course of a day in early August. O’Neal said her non-Black teammates weren’t required to participate, but “they always mention they really wanted to support us and make sure that we know that they’re supporting us.” For the shoot, the team was split into groups of three or four. Each of the Black women were given a couple of lines to read. All of the Longhorns chanted “Black Lives Matter” over the video’s final 10 seconds.

“When this came about, this became an action item for them. It really hit home,” Texas coach Jerritt Elliott said. “They were pretty strong-minded about it, and strong-mined can be really good if you get it directed the right way. We’ve had no issues with them. They’ve been very positive about it, they’ve wanted to make an impact, they’ve wanted to understand all sides of it.

Following the release of the video, there were some negative comments that O’Neal conceded “you’re always going to get with anything that you do.” But both O’Neal and Eggleston were pleased with a reaction they gauged as mostly positive. Eggleston said she even received praise from athletes at other schools.

“(There is an) overall narrative that Texas Volleyball is a program that always does a really good job with making sure that diversity is there and that we are supporting it as well,” O’Neal said. “Just seeing our fan base really supporting us and saying they’re going to fight for us too is really, really nice to see and makes me really proud to be a Longhorn.”

The video was the latest in a line of recent demonstrations by athletes at Texas. Eggleston and O’Neal are among the Longhorns who have published powerful statements about race on social media. The aforementioned protest led to UT pledging to rename the Robert Lee Moore Hall and divert funds to the recruitment of Black students. (The school kept the Eyes of Texas but told athletes they wouldn’t be forced to sing it).

Ahead of last week’s opener against Kansas, the UT soccer team socialized a team photo in which all the players wore Black Lives Matter t-shirts. The football team has chosen to place patches on its jerseys that say “We are one.”