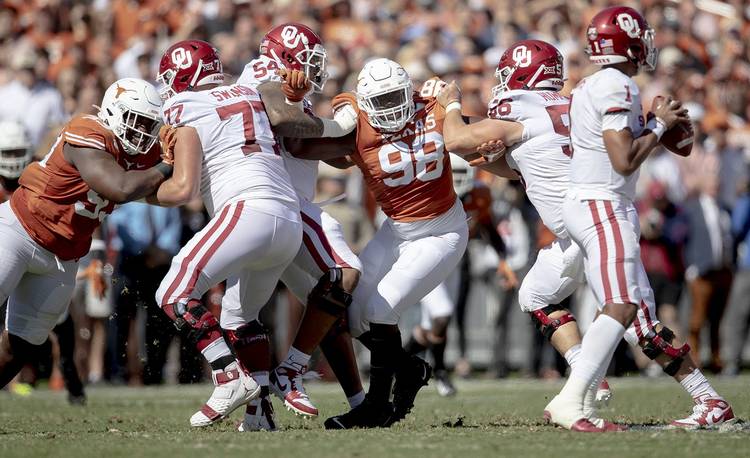 It’s hard to quantify whether a defensive tackle is performing well. Texas coach Tom Herman will tell you statistics at that position are meaningless. It’s a subjective eye test.

“Me being the nose (guard), I’m getting hit from left, right, down the middle every play,” Coburn said. “So, it’s pretty annoying where you know you want to make plays but you really can’t because you’re getting triple-teamed or double-teamed every play.”

One of the biggest changes this offseason has been Herman’s switch to a four-man defensive front. Most of the attention has gone to Joseph Ossai for his move from linebacker to rush end. But this new alignment may significantly boost the production from UT’s four interior defensive tackles, even if it’s not obvious in the stands or watching on TV.

Texas Tech (1-0) gets its first chance to decode UT’s new defensive look in Saturday’s Big 12 opener against No. 8 Texas (1-0) at Jones AT&T Stadium.

After the lid-lifting win over UTEP, Herman said, “The crew that I’ve been very, very impressed with are those inside guys.” That includes Coburn, senior captain Ta’Quon Graham, sophomore T’Vondre Sweat and freshman Alfred Collins. Those are “four bona fide dudes in there,” he said.

Those four combined for 5.5 tackles, and Collins had a sack in the 59-3 win. “His body don’t look like a freshman,” Coburn said, “but his face does.”

Let’s revisit the numbers posted by some previous players. Poona Ford had just 1.5 sacks and eight tackles for loss in 2017. That doesn’t necessarily sound impressive, as stats go. But the future Seattle Seahawk was named the Big 12’s defensive lineman of the year as UT had the league’s second-best run defense.

It was easier to see someone like Charles Omenihu getting 9.5 sacks off the edge in 2018. The future Houston Texan was also the Big 12 defensive lineman of the year. Chris Nelson had no sacks and 5.5 tackles for loss inside, though. It was widely perceived he had a solid senior year for a 10-win team.

Last season, the three-man front couldn’t get the same game-changing production. Coburn was a redshirt freshman, and Graham wasn’t the best fit as an edge rusher. Texas still finished third in Big 12 run defense but ninth in pass defense and sixth in sacks.

During the offseason, Herman promised to make changes that put his players in better positions. The change to a four-man front was also due to a change in coordinators. Chris Ash prefers the four-man look to former defensive coordinator Todd Orlando’s 3-3-5 stack.

Herman also hired another assistant coach to work with defensive line coach Oscar Giles. Mark Hagen, who was Indiana’s co-defensive coordinator, has almost three decades of coaching experience. By hiring another coach specifically for the line, Herman showed how serious he was about bolstering that area.

There were other personnel moves, too. In addition to moving Ossai, coaches moved Graham to defensive tackle. That could be a far better spot for the 6-foot-4, 294-pound Graham.

Now, the defensive tackles play what’s known as a “two technique,” which means they typically line up over the guard. In some ways, it helps level the battle up front. Coburn said “it gives opportunity” now that offensive linemen must account for four defensive lineman, and maybe a fifth player if the defense blitzes.

No longer can a center and guard just blow the Texas nose guard off the ball while tackles push two defensive ends out wide.

“So instead of having six against three, it’s six against four or five against four,” Coburn said. “That’s a better opportunity to make plays. I’m right there where, are they going to double-team the tackle? Double-team me? Or whoever’s performing better at that time? So that just gives everybody opportunity to make plays and a better chance to get value as a tackle.”

So far, Ash likes what he sees.

“I think we have a chance to be pretty stout right up to the middle,” Ash said. “We want guys that can hold the point, can stop the run as well as be able to rush the passer. And I think we’re going to have two, actually, probably about three or four really big strong, physical guys that can do all the things that we want right up there in the heart of our defense.”

Just because Coburn and Graham aren’t sacking the quarterback doesn’t mean they aren’t being productive.

“Us big guys don’t get a lot of praise unless you get a sack or tackle for loss,” Coburn said. “But we get graded off did you stay in your gap, did you use your hands right, did you have push back, did you run to the ball? Every team you play, you have to run to the ball, so (the coaches) really take care of the loafs.”

Texas will have plenty of practice time in September playing only two games. Once October begins, Big 12 games come fast and furious. The true magnitude of this defensive line philosophical shift may not be clear until November. So far, the Horns are off to a good start.

Ash said he likens it to baseball; every good defense must be strong up the middle. “And it starts right up front,” he said.