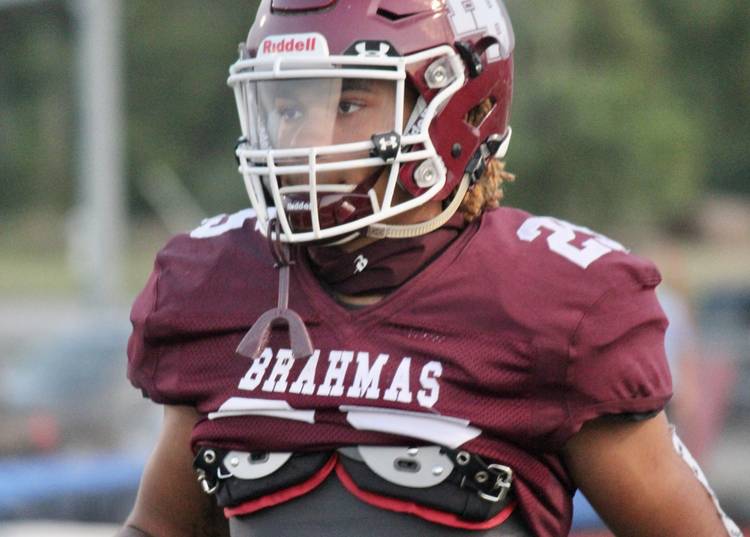 HALLETTSVILLE — Jonathon Brooks is a small-town kid who doesn’t mind being overlooked in Texas’ 2021 recruiting class. The three-star running back from Hallettsville prefers a low-key approach to life, allowing his play to do the talking on the football field. He rushed for four touchdowns and more than 200 yards in a Friday night win over Rice Consolidated.

“Feels normal and good to be back with the team and get some wins,” Brooks said after the win. He also started at cornerback. “I want to be in a spot to help the team, no matter what position that is. We didn’t know if we’d have a season this year, so it is great to be back with my teammates.”

With his college decision behind him, Brooks is free to concentrate on his senior season.

“I used to wake up every morning to texts and emails from coaches, and that got overwhelming,” Brooks said. “I like Texas because the coaches are great, as well as the atmosphere and the proximity to home.”

Brooks chose Texas on May 15. He’s one of 17 pledges for the Longhorns. The group ranks 15th in the nation and second in the Big 12, trailing Oklahoma. Brooks is the 27th-ranked running back and 467th overall nationally, according to the 247Sports composite rankings. He’s currently the only running back committed to the Longhorns. His future position coach was crucial to his decision.

“Stan Drayton is a great person. He knows what he’s doing because he’s coached a lot of NFL players like Zeke Elliott,” Brooks said. “He was interested in me as a person, not just as a football player.”

Brooks debuted as a varsity player as a sophomore. The 6-0, 185-pound three-star finished the 2018 season as a first-team all-district selection. He backed that performance up with 1,300 rushing yards and 25 touchdowns in a junior season that culminated with District 14-3A Division I overall MVP honors, helping his squad reach the state quarterfinals and an 11-3 record.

“He’s a great young man and an all-around player. I’ve watched him mature and grow into a leader for us,” said Hallettsville head coach Tommy Psencik. “His physicality separates himself from most of his peers at this level. He’s real competitive and hates losing.”

Brooks believes he’s grown more in confidence than in talent.

“I believe in myself a lot more. My confidence has grown since my sophomore year,” he said. “I know I need to keep improving every aspect of my game. I can’t wait to get to Texas. It’s going to feel unreal.”

I WILL BE COMMITTING ON OCTOBER 1st STAY TUNED!!!

The Longhorns are in a dogfight for Mukuba with Clemson, LSU and Missouri. The 6-0, 185-pound safety is ranked 30th on the Fabulous 55. The 247Sports composite ranking has him listed as the 14th-ranked safety, checking in at No. 242 in the overall rankings. Texas is one of his 35 offers.