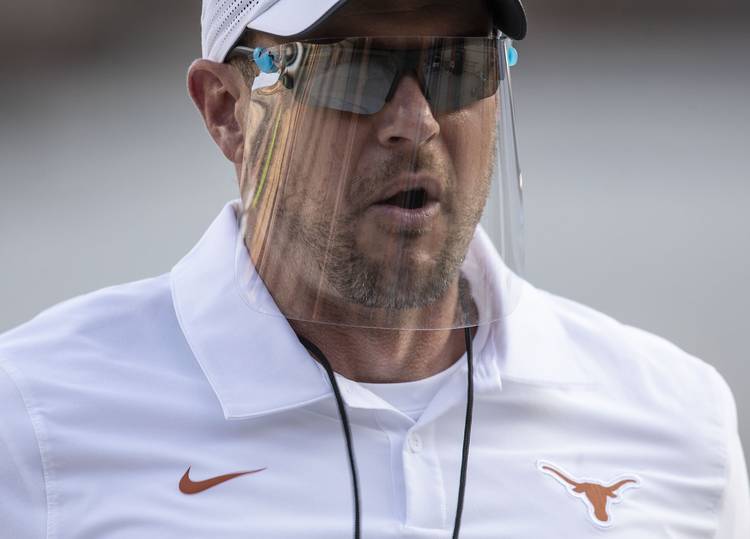 The biggest challenge for Texas this week isn’t Texas Tech. It’s everything leading up to kickoff for the first road game of the year.

The eighth-ranked Longhorns were idle last weekend and players were released for the break, as is custom. While the team has avoided COVID-19 in recent weeks, players are scheduled for three tests this week and need to remain negative.

Knock twice on every desk, tree or two-by-four you can find in the lumber yard.

“Oh, well, I hate to even talk about it because I don’t want to jinx it,” UT coach Tom Herman said Monday. “We could certainly be next.”

Other schools have not been so fortunate. Multiple Big 12 schools have seen games postponed or canceled because of positive tests. Baylor scrambled to get Houston on the schedule for last Saturday and that one got scrapped, too.

On Monday’s Big 12 conference call, Kansas State coach Chris Klieman made COVID testing sound like whack-a-mole. “We were able to get 12 kids back Monday after that game,” he said. “Lo and behold we lost another 10 to tracing or positives in the last week. We take two steps forward, a step-and-a-half back.”

Herman said his players have remained diligent. And it helps that Texas had several players test positive in July and August. LSU coach Ed Orgeron said publicly that “most of our players have caught it” and have already recovered.

“I just really think our guys have bought in, which is not an easy thing to do here in Austin at the University of Texas to live the life that they’re having to life in order to stay safe and COVID free,” Herman said.

Assuming everyone passes the Sunday, Wednesday and Friday tests, the Horns will be cleared to fly to Lubbock. That’s a far bigger challenge than just cramming into a 737. Contract tracing forces a coaching staff to rethink where everyone is seated.

“If a kid tests positive within 24-48 hours of being on that airplane, the two rows behind him and the two rows in front of him are going to get wiped out,” Herman said. “And that’s regardless of wearing a mask, or at least that’s my understanding as of today.

“So that’s going to be a little bit difficult on how we seat the airplane, strategically,” he added. “I know our operations people are hard at work at that.”

Then, Texas gets to the team hotel in Lubbock — or wherever the Horns are staying on the road this season. Typically on Fridays, the players meet with family members and enjoy a buffet-style meal. Before the UTEP game, Herman said, it was a grab-and-go affair.

“I think I said a few words to them,” Herman said. “We had a quick 15-minute chapel reflection, and then get your food and go to your room.”

Players are usually matched up with teammates, two to a room. Not this year. Every player has their own hotel room, which doubles the amount of rooms needed. Herman joked that it makes bed checks miserably long.

“Just not the way any of us had envisioned what Friday nights would look like prior to a game,” he said, “but it’s what we’ve got to do in 2020.”

Those who clear all those hurdles will then don the signature white Texas road uniform for a scrum with Texas Tech (1-0). Saturday’s game is the Big 12 opener for both teams.

“Usually, in a normal year, you’ve got to weather the crowd noise and the unfamiliarity of whatever hotel it is you’re staying,” Herman said. “When you take the crowd out of the equation, there really is no difference playing at home or on the road.”

Herman’s press conference Monday was rather mundane considering Texas has played only one game, a 56-point blowout, and things are going smooth. Slot receiver Jake Smith is questionable this week with his hamstring injury. If he can’t be cleared until Wednesday or Thursday, as Herman indicated, then Smith is unlikely to play against the Red Raiders.

Fellow slot receiver Jordan Whittington has already been ruled out 2-4 weeks with a knee injury. When Texas released its depth chart, Smith, walk-on Kai Money and grad transfer Brenden Schooler were listed as the slot receivers.

The Red Raiders always play the Horns well in Lubbock, but Texas is 5-0 in its last five trips to the Hub City. In fact, UT is 9-2 over their last 11 matchups. The last time Texas lost out there came in 2008, as Michael Crabtree was racing into the end zone and into Texas Tech glory. Crabtree will be honored this weekend while being inducted into Tech’s ring of honor.

Herman said this will be a good test for “in-game adjustments” seeing how Tech will have a different game plan against UT than the vanilla one used to beat Houston Baptist.

Still, Herman believes the Horns have a “quiet confidence.”

“I think our guys know what they’re capable of,” Herman said. “I do think from the veterans being around here, seeing the makeup of different teams as well as the overall sense of what this team is capable of, I do think there’s a lot of confidence in that locker room.”