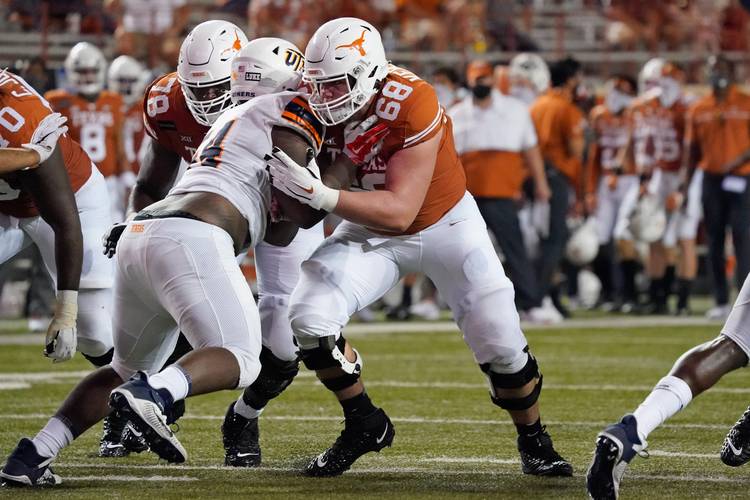 Since he arrived in Austin a few years ago, Derek Kerstetter has done a little bit of everything on the offensive line.

The Texas senior has started at right tackle. Twenty-three times, to be exact. He started five games in 2018 at right guard. And he was used as a left tackle in high school, so that has to also count for something.

In the season-opening blowout of UTEP, Kerstetter made his first college start at center. What will he check off next on his positional bingo card?

For now, Texas will just settle for him successfully snapping the ball to quarterback Sam Ehlinger. Texas entered this season with a hole in the middle of its line following the departure of four-year starter Zach Shackelford, who is now on the Tampa Bay Buccaneers’ practice squad.

The 6-5, 293-pound Kerstetter seemed like a logical pick to replace Shackelford. He was, after all, the team’s emergency plan at center in 2019. But getting practice reps and holding down the full-time gig are two different things.

“Now being the full-time guy and getting all the reps, it’s been a transition but I think I’ve really started to welcome the role,” Kerstetter said. “I’ve enjoyed it because that’s what my team needs. I was happy to move there.”

Said Longhorns left tackle Samuel Cosmi, “We call him a jack-of-all-trades type of guy, he can do everything.”

When it comes to Kerstetter and Shackelford, how do you compare and contrast these centers? Kerstetter said he and “one of my best friends” prepare the same way, and both have a solid rapport with Ehlinger. Kerstetter does have longer arms than Shackelford, but that hasn’t yet caused any issues with snaps.

“Derek has done an excellent job at the center position,” Ehlinger said. “He understands the role and the communication that it really takes for playing center. It’s a little bit different. He’s calling out ID’s, he’s calling out protections and calls and everything like that where at right tackle, you’re kind of waiting for the center to call it out.”

When asked about what stands out about Kerstetter, safety Caden Sterns retorted that, “He’s a San Antonio dude.” Sterns, who hails from Cibolo, also commended Kerstetter’s versatility.

Since Herman was hired ahead of the 2017 season, the cross-training of offensive linemen has not been an uncommon practice. Texas played Elijah Rodriguez at left tackle, center and both guard positions at different points during the 2017 and 2018 seasons. Two years later, Kerstetter is now Mr. Versatile on the line.

“I feel like you have to be very talented to do all those things,” defensive lineman Ta’Quon Graham said. “I feel like he’s one of the best players we’ve got on this team if he can do all that.”

Texas quarterbacks attempted 41 passes in the opener, but UTEP failed to record a sacks. The performance, though, wasn’t perfect. On Monday, Herman pointed to uninspiring rushing numbers and a few hits taken by his quarterbacks as areas the line needed to improve in.

This weekend, Kerstetter and his fellow linemen will provide Ehlinger with security against a Texas Tech defense that had three sacks in its season-opening win over Houston Baptist. Texas Tech registered five sacks during UT’s last trip to Lubbock, but last year’s meeting featured only one takedown of Ehlinger.