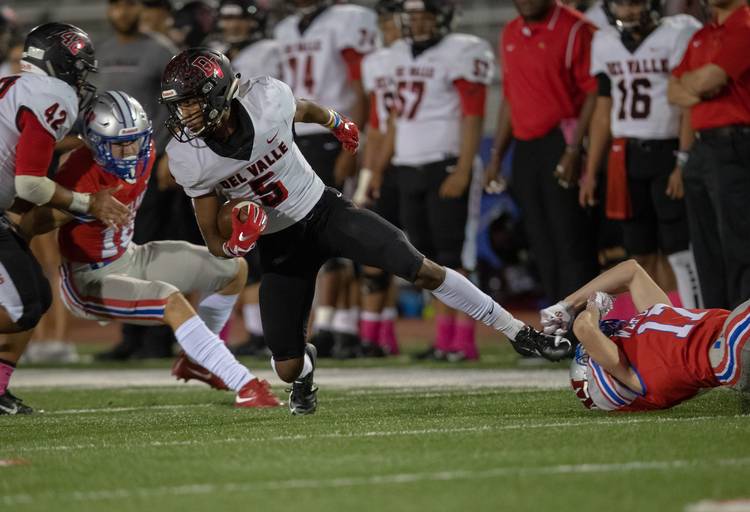 Del Valle wide receiver Caleb Burton is considered the top prospect at the position in the 2022 cycle. [JOHN GUTIERREZ/FOR STATESMAN]

Football begins across the state of Texas this week for most of the Class 5A and 6A programs. Texas’ 2021 class is nearly complete, shifting the coaching staff’s focus to the next year’s crop of 2022 recruits. The Longhorns already hold three pledges in the 2022 class. Here are five offensive targets I want to see early in the 2020 season:

Congratulation to @Jadarian15 for receiving an offer from @TexasFootball. What an outstanding young man that is exuberant in the classroom and on the field. Could not be more happy for him.#IGTBAYJ #GREATTEAMMATE pic.twitter.com/1AwmbIiEFj

Price is one of three in-state running backs holding a Texas offer. He’s an intriguing prospect on film and I want to see him in person in an 11-on-11 setting. He already possesses plenty of varsity experience. He was the District 7-5A Division II newcomer of the year as a freshman in 2018. He was a first-team all-district selection as a sophomore. The four-star is a future member of the Fabulous 55, and I’d like to see how he stacks up against peers like Jaydon Blue and Tavorus Jones. Price enters his junior season with 2,097 rushing yards and 19 total touchdowns.

The Austin area is no stranger to nationally ranked wide receiver prospects in recent years, led by Lake Travis’ Garrett Wilson, who headlined the 2019 Fab 55. Burton is considered the top wide receiver prospect in the country by 247Sports’ composite rankings. The local product holds 38 total offers. The two-time all-district selection caught 83 passes for 1,491 yards and 18 touchdowns in his previous two varsity seasons. His father, Charles, is the head coach at Del Valle.

Green remains the only tight end in the 2022 class to hold a Longhorns offer. We saw Texas utilize the tight end a lot in its win against UTEP, signaling that the Longhorns want to keep recruiting the position at a high level under new offensive coordinator Mike Yurcich. Green is considered the second best tight end in the entire 2022 class. He’s currently more wide receiver than blocker, but his frame suggests plenty of room to grow into a true three-down tight end. He  caught 34 passes for 615 yards and five touchdowns as a sophomore. That earned him first-team all-district and MaxPreps sophomore All-American honors.

Banks was a prospect scouts wanted to see at camps over the summer, but COVID-19 concerns cancelled events like The Opening and on-campus camps. Offensive line prospects make the biggest jump between their sophomore and junior seasons because their bodies tend to evolve in the weight room. Banks shot up recruiting rankings as his offer list grew following a decommitment from Oklahoma State. The big schools are now swarming and he’ll hold an elite offer sheet with a strong junior season.

Hutson picked up an offer from Texas back in May. He’s a player I’ve yet to see play in person. The top interior lineman in the state is Devon Campbell, so it’ll be fun to see how Hutson measures up as a prospect. He’s a three-sport athlete who also plays baseball and throws for the track and field team. Hutson was a first-team all-district selection as a sophomore.