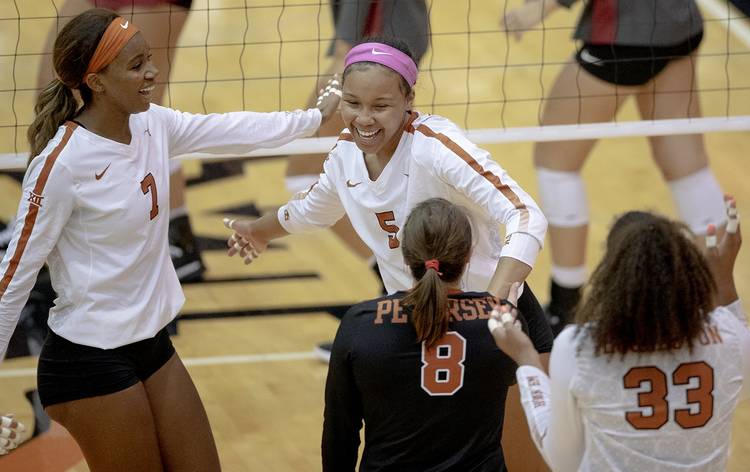 At some point this offseason, Texas volleyball coach Jerritt Elliott came to a realization.

Elliott has been coaching for more than two decades now. This is his 20th year at Texas. Ask him a question about the serve-receive game or the different kinds of middle blockers and you’ll get a detailed response. Elliott, though, was admittedly not as good with consistently connecting the dots between his sport and the ever-changing news cycle during the coronavirus pandemic.

“I finally got to a point where I was just like, I’m going to take it one day at a time,” Elliott said on Tuesday. “I’ve got over 20 years of experience and we’ll make the adjustments when those moments come. Just to kind of embrace every day and look at the glass half-full that we have this opportunity.”

On Thursday, Texas and its half-full glass will open the 2020 season at Oklahoma. That glass will remain half-full on Friday when the Longhorns play the Sooners again.

This season will be a unique experience. Texas will only play Big 12 foes. The Longhorns have been conference champions in eight of the last nine years and are favored to win the Big 12 again this fall.

Capping a crazy year with a conference title would be nice. But volleyball players don’t come to Texas for Big 12 bling. The chase for a national title will feature a detour, however.

Since many conferences have delayed their seasons, the NCAA will not host a volleyball tournament this fall. On Tuesday, the NCAA’s Division I board of directors approved a plan for a 48-team event that begins in early April. (Sixty-four teams are traditionally invited to the NCAA tournament).

How that plan impacts a team like Texas, which wraps up its regular-season schedule on Nov. 13, has yet to be determined. Big 12 coaches had a call to talk about these postseason plans earlier this week. Among Elliott’s biggest concerns is scheduling and trying to prepare ahead of a spring tournament while many teams are in conference play. He also noted that the NCAA currently only allows its volleyball teams to have a 132-day season.

“I can’t control any of that right now,” Elliott said. “We’re going to take one day at a time. We’ve got the experience to kind of move forward.”

Texas is coming off a season in which it went 23-4 and was the second overall seed for the NCAA tournament. The Longhorns were upset by Louisville in the third round. That marked the earliest end to a volleyball season at Texas since 2005.

Texas is not lacking in experience this year. Five returnees appeared in all 13 postseason sets last year. Graduate transfer Morgan O’Brien reached the Final Four with Illinois in 2018.

This offseason, Texas added one of the nation’s top recruits in setter Naomi Cabello. O’Brien and fellow liberos Nalani Iosia and Reilly Heinrich joined the team. Those additions and the returns of incumbent starters Jhenna Gabriel and Sydney Petersen gives Texas plenty of options at those positions.

“We’re really happy with our backcourt right now, it’s significantly improved,” Elliott said. “I think our setting has taken a step up as well. You’ll see some different wrinkles in our offense a little bit.”

That, though, is only a list of five attackers. Freshman Madison Williams is still recovering from a knee injury that ended her high school career. The Longhorns were also unable to get foreign signees Melanie Parra and Adhuoljok Malual to campus this fall because of pandemic-related travel issues.

Elliott said outside hitter Capri Davis, a transfer from Nebraska, is “week-to-week” for undisclosed reasons. On Wednesday, a team spokesperson declined to elaborate further on her availability. Davis did not participate in the shoot for UT’s Black Lives Matter video last month, and she is the lone Longhorn with an out-of-date picture on the team’s website. Davis’ biography was not included in the game notes for this week’s series against Oklahoma.

“My biggest concern is just depth,” Elliott said. “Right now, we have five attackers. If anyone goes down, we’re going to have to probably lean on a setter to be a hitter.”

When Texas takes the court at the McCasland Field House on Thursday evening, 285 days will have passed since the NCAA loss to Louisville. This week, Elliott downplayed a lack of motivation for his players given the current circumstances. That echoed a sentiment expressed during an uncertain summer by Gabriel.

“We are all foaming at the mouth to get back on the court and do what we love,” Gabriel said. “I think this type of adversity is going to make us stronger than ever.”