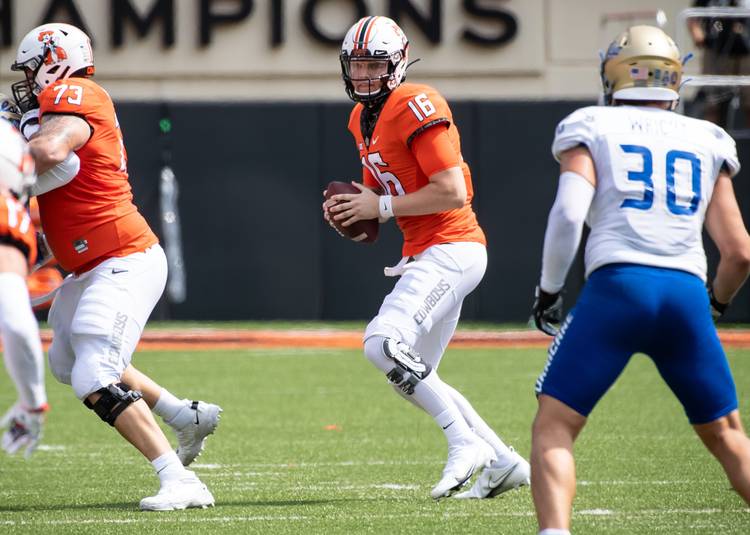 The poor play by the bulk of the Big 12 means Oklahoma must run the table, and do so emphatically, to reach the College Football Playoffs, especially given the lackluster performances by the Sooners in previous appearances. That’s probably fine with head coach Lincoln Riley and a high-powered offense led by former five-star quarterback Spencer Rattler.

The Big 12 is ripe for the picking for the Longhorns and head coach Tom Herman. Texas and Oklahoma are the class of the conference, and it is Texas with the senior quarterback and Oklahoma with an inexperienced starter at the position for the first time in Herman’s tenure. The conference run begins against an apparently hapless Texas Tech squad.

Baylor keeps moving up the Big 12 poll despite COVID-19 preventing the Bears from beginning its season. Head coach Dave Aranda hopes his tenure begins Saturday at home against Kansas. Not a bad matchup for Baylor and Aranda to ease into the season, and into a new system. The Jayhawks rarely require a warmup.

The Horned Frogs are the other Big 12 team yet to start the season, which is probably good considering the issues TCU is having at the quarterback position due to injuries and COVID-19 tracing. Iowa State is scheduled to be in Fort Worth on Saturday. The Horned Frogs are the underdog despite Iowa State starting the season with a loss to Louisiana.

The Mountaineers can vault into the top-half of the Big 12 power poll with a win over a beatable Oklahoma State squad on Saturday. West Virginia impressed in its season opening win over Eastern Kentucky, though, at least on paper, Oklahoma State presents a tougher challenge. The Mountaineers are rolling with quarterback Shane Doege after he split time as the starter in 2019.

The Red Raiders needed the bye week to gather its breath after nearly falling to Houston Baptist in the season opener. A better effort is needed for Texas Tech to avoid an embarrassing loss to Texas at home this weekend. It’s hard to imagine this defense stopping Sam Ehlinger and the Longhorns.

Iowa State lost its opener for the second straight season. Quarterback Brock Purdy didn’t resemble an NFL prospect in that loss to Louisiana two weeks ago. The Cyclones can right the ship with a win over TCU. A loss sends Iowa State into panic mode before the start of October. The revered Matt Campbell is now 26-26 as the head coach in Ames.

Kansas State fans are already clamoring for coaching changes. Bill Snyder isn’t walking through that door, and no that isn’t a joke about his age.

The Big 12 should adopt relegation and explore trading Kansas football for SMU.