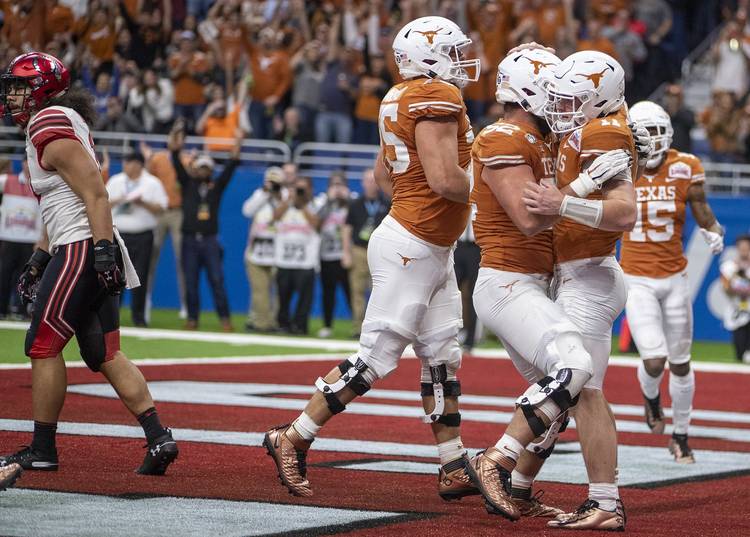 Texas Longhorns quarterback Sam Ehlinger (11) celebrates a score against Utah Utes during the 2019 Valero Alamo. Ehlinger leads the Horns into the 2020 opener against UTEP Saturday. [RICARDO B. BRAZZIELL/AMERICAN-STATESMAN]

Take a look around the Big 12, Longhorns fans. Do you see anyone better than No. 3 Oklahoma and No. 8 Texas?

Mack Brown could probably find somebody that “scares you to death.” The former Longhorns coach said that about everybody, even losing teams. But really, who’s going to stop the Horns and Sooners from romping and stomping their way through the Big 12 this season, putting them on a December collision course for the league title game and a spot in the College Football Playoff?

“I would caution everybody on the call,” UT coach Tom Herman said this week on his weekly Zoom media availability. “Let’s not jump to too many conclusions here after one game with the craziest offseason in the history of college football.”

Even in this COVID-shortened, 10-game regular season, the Longhorns (1-0, 0-0 Big 12) have a clear pathway to their first CFP appearance. Texas can take the first step by knocking off Texas Tech (1-0, 0-0) on Saturday at Jones AT&T Stadium.

This isn’t about putting extra pressure on Herman and the Horns. This is about outlining something they expect of themselves.

Every person working in Moncrief has pointed toward Herman’s fourth year as the breakthrough season. This team, led by a senior quarterback, is stocked full of Herman-era recruits. This team, energized by a retooled defense, was expected to beat UTEP by 43 points in the season opener and won by 56.

This team, an 18-point favorite this week playing in Lubbock, should have no trouble dispatching a Texas Tech squad that struggled to beat FCS-level Houston Baptist 35-33.

Then, Texas faces TCU next weekend and Oklahoma on Oct. 10 at the Cotton Bowl in Dallas. After OU, the Longhorns are likely to be favored in the final six games.

Neither TCU nor Baylor have played a game yet because of COVID-19 cancellations. Oklahoma State quarterback Spencer Sanders is already banged up. Iowa State looked plain dreadful in a loss to Louisiana. West Virginia, Kansas and Kansas State certainly don’t scare anybody, no matter what the opposing coach might say.

Still, Herman urges caution. This team, one with a history of playing up or down to its opponent, must first get through nine conference teams and qualify for the Big 12 title game. Herman admitted the Horns have a “quiet confidence” and that his players “know what they’re capable of.”

That said, all Texas has done so far is beat UTEP.

As it relates to what’s possible, Herman urges caution. He’s not trying to tamp down expectations by saying the Horns will see a “very, very much improved Texas Tech team.” It’s his way of offering a gentle reminder that “this is a huge, huge test on the road, the level of competition ratchets up significantly.”

“I think we’re all crazy if in 2020 we want to judge a team good or bad off of their Game 1 performance; I think we’re all going to be in for some really poor predictions moving forward,” he said.

OK, so perhaps caution is warranted. Tech quarterback Alan Bowman is back after a shoulder injury ended his 2019 season. The Red Raiders should have a better grasp on things in coach Matt Wells’ second season. This is a team that was in virtually every game last season by scoring 30.5 points, but also allowed 30.3. Fourth quarters were not Tech’s forte.

It’s also a team with athletes like Eric Monroe. At Galena Park North Shore, Monroe helped his team defeat Westlake, which was led by quarterback Sam Ehlinger, to win the Class 6A Division I state title. Then last season, Monroe played for LSU when his team defeated Ehlinger and the Longhorns at Royal-Memorial Stadium.

“What’s different is his accuracy and his running ability now,” Monroe told the Lubbock Avalanche-Journal. “He’s got vision. He’s like a running back back there when he runs the ball. He’s going through his progressions and capitalizing on them.”

For all the Texas talk about the difficulties of playing in Lubbock, the Horns have generally fared well. They’re 5-0 at The Jones since 2010. The last trip to the Hub City required a spectacular catch by Lil’Jordan Humphrey for UT to win 41-34.

Tech is going to stir up as much emotion as possible by inducting two-time Biletnikoff Award winner Michael Crabtree into the school’s ring of honor. School officials could have picked any weekend, but they chose the Texas game. Why? Oh, something happened against No. 1-ranked Texas that season that shall go unnamed in this space.

Well, Crabtree scored one of the greatest touchdowns in Tech history that ruined UT’s shot at playing for the national championship, but who remembers such trivial things these days?

At least Texas won’t have to worry about a frothy Tech fan base. The stadium is expected to welcome about 16,000 fans because of the pandemic and social distancing.

“I guess there will be a quarter of the amount of tortillas thrown per game on Saturday,” Ehlinger said. “So it’s kind of unfortunate. Always a great, great time playing up in Lubbock. They’re always a hostile environment, and I expect it to be the same. But I guess just at 25%.”