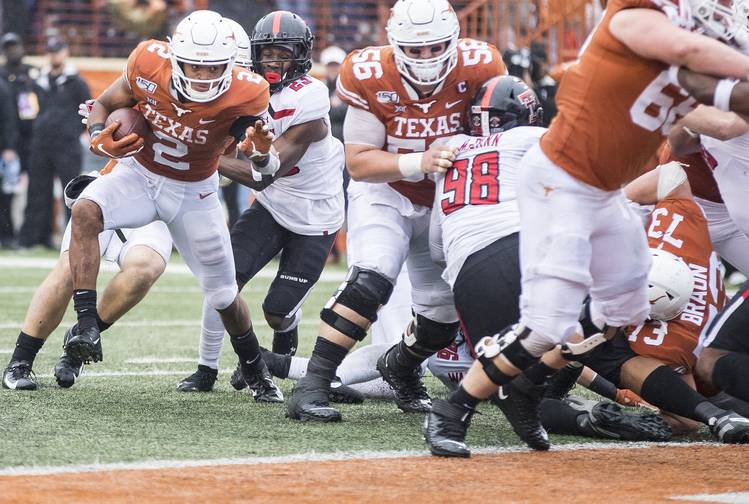 Texas running back Roschon Johnson (2) scores in the fourth quarter against Texas Tech in Austin on Nov. 29, 2019. [RICARDO B. BRAZZIELL / AMERICAN-STATESMAN]

Adimora received the first start of his Longhorns career in the season opener. The sophomore was second on the team with his six tackles from the “spur” position. When asked this week about Adimora, Texas junior safety Caden Sterns said “he’s just a dude that wants to be the best that he can. Again, I think his impact on this defense is going to be really huge.”

Texas has three running backs that it will rely on this weekend, but the Red Raiders already know all they need to know about Johnson. Last year, he ran for 105 yards and three touchdowns in a 49-24 win over Texas Tech in Austin. That is one of only 10 100-yard games in the Tom Herman era. Two weeks ago against UTEP, Johnson was given the start and he scored UT’s only rushing touchdown.

Texas Tech surrendered 572 passing yards in its opener, but McPhearson did record the first interception of his career. The 5-11, 195-pound corner started all 12 of Tech’s games in 2019. That season was McPhearson’s first in Lubbock after he spent three years at Penn State. Against Houston Baptist, the Texas Tech defense started seven players who began their collegiate careers elsewhere.

Thompson was arrested earlier this week, and the sophomore faces a Class B misdemeanor for a racing incident that occurred on June 27. But according to the Lubbock Avalanche-Journal, Thompson is available for Saturday’s game. In Texas Tech’s opener against Houston Baptist, he scored twice and accounted for 118 of the team’s 194 rushing yards. Last year against UT, he had 86 yards on 16 carries.