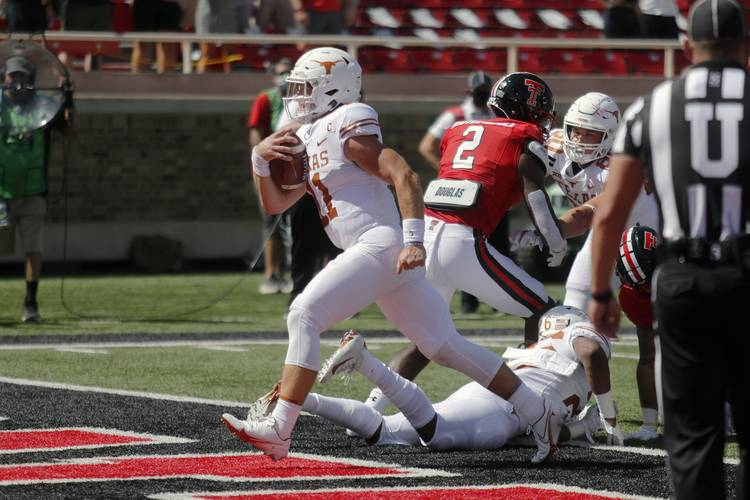 How it all happened Saturday afternoon in Lubbock:

Texas 17, Texas Tech 7. The Longhorns literally picked up where they left off against UTEP, putting up 175 yards of offense and scoring on all three of their drives. Sam Ehlinger scored on his first touchdown run of the season and Joshua Moore had a beautiful high-point touchdown catch. All three running backs played, five different Longhorns caught a pass and the defense settled down after some first-drive hiccups.

Halftime — Texas 31, Texas Tech 21. It didn’t take the Red Raiders long to get back into the game, as Bowman found Carter again in a crowd for a score. Two of the biggest plays of the quarter ended up having no impact. Tech surprised everyone, but certainly the Longhorns’ kick coverage, with an onside kick after the Carter score. But Chris Brown picked off Bowman to quell the threat. And a 19-yard scoop-and-score fumble recovery for a touchdown by Juwan Mitchell was called back after a video review, it being instead ruled to be an incomplete pass. A free-play shot into the end zone yielded a Tech touchdown to cut the lead to 24-21. And another big play on special teams — a blocked punt by reserve tight end Jaden York — gave the Raiders the ball at UT’s 15. But Chris Adimora picked off Bowman’s first down pass and returned it all the way down to Tech’s red zone.

Texas Tech 42, Texas 38. They’re called special teams for a reason. Tech’s certainly were special — an onside kick, a blocked punt and, to open the second half, a muffed punt recovery in the end zone for a touchdown. D’Shawn Jamison’s critical return flub made it a 31-28 game. But equally critical was Tyler Owens’ punt that the Horns picked up and scored on as well. That made it 31-28 with 12 minutes left in the quarter, but neither team seemed interested in generating anything beyond that … until the Red Raiders struck at the very end. Twice. T.J. Vasher beat Jalen Green for a slant route touchdown, and Ehlinger was picked off and the Raiders were set up at the Texas 10 on the run-back.

End of regulation — Texas 56, Texas Tech 56. A short field goal cut Tech’s lead to 42-41; Marcus Washington, who had two steps on his defender, couldn’t come up with a slightly underthrown pass into the end zone on the drive. And Texas’ next drive was sabotaged by a holding penalty that the Horns weren’t able to overcome. Another a chop block call doomed the next drive, too, when the Horns trailed by 8 points with five minutes left. Things looked dire late after a 75-yard Red Raiders touchdown run, but the Horns scored 15 points in the final three minutes, recovering an onside kick and converting a tying two-point pass along the way, to send it to overtime.

Final — Texas 63, Texas Tech 56. The Red Raiders won the toss and decided to play defense. Ehlinger found Moore for a touchdown, and Tech couldn’t get anything generated with its chance, Bowman’s final fourth-and-14 pass picked off by Caden Sterns to seal the Longhorns’ win.