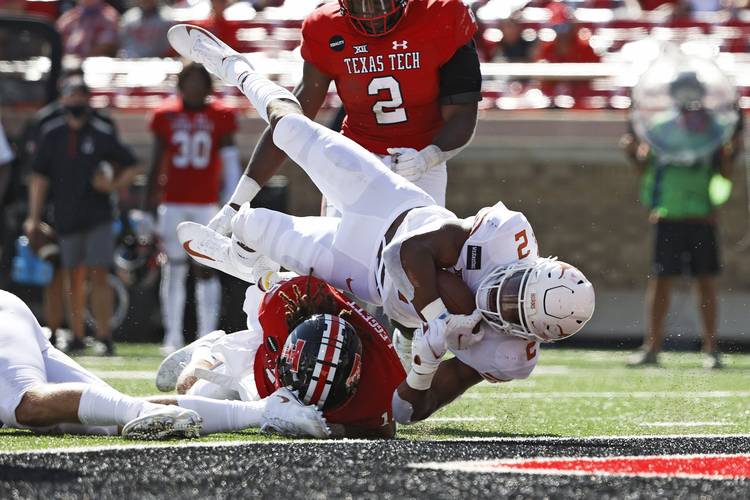 Texas' Roschon Johnson (2) lands in the end zone to score a touchdown during the first half of an NCAA college football game against Texas Tech, Saturday, Sept. 26, 2020, in Lubbock, Texas. (Brad Tollefson/Lubbock Avalanche-Journal via AP)

In three of its previous five games against Texas Tech, Texas received a standout performance from a running back.

No Longhorn hit the 100-yard mark on Saturday. But there was a key run in overtime of the 63-56 win in Lubbock.

Texas averaged 4.5 yards a carry against the Red Raiders. Keaontay Ingram finished with 89 yards and Johnson scored his second rushing score of the season. Bijan Robinson suffered a strained back injury and finished with four carries.

“I get really uptight anytime we get tackled for less than four yards. Sometimes I don’t see the forest from the trees in the middle of the game,” Herman said. “Do I wish it were cleaner at times? Yes. But to walk out of there with 214 yards rushing, that’s a pretty good day and we’ll take it.”

Texas was coming off an underwhelming rushing performance in the first game of its season. The Longhorns did average 6.3 yards per carry against UTEP, but those statistics were skewed by a 40-yard lateral to tight end Malcolm Epps. No Longhorn rushed for more than 45 yards in the opener.

Saturday, Ingram averaged 7.4 yards per carry. Thirty-six of his 89 yards were picked up on a fourth-quarter possession that ended with a field goal. He then had a 12-yard run on the second play of overtime, and Texas struck gold on Sam Ehlinger’s game-winning pass to Joshua Moore a play later.

Oh brother: Since he is a graduate transfer, UT receiver Brenden Schooler got his first look at the Texas Tech defense on Saturday. Schooler, though, did have an in-depth scouting report for one of the Red Raiders.

Colin Schooler, his brother, is a graduate transfer and linebacker at Texas Tech. The Schoolers were supposed to play together at Arizona this season. Colin had been a three-year starter for the Wildcats, and Brenden decided to join his younger brother after spending four years at Oregon. Both, however, left after the Pac-12 postponed its season in August.

Both Schoolers had good games. Targeted 10 times, Brenden led Texas with seven catches. One of those was a 3-yard touchdown that gave Texas a 31-21 first-half lead. Colin, meanwhile, recorded seven tackles.

With the win, Brenden secured family bragging rights. He did not play in last year’s meeting between Oregon and Arizona, and those schools split their previous two games.

Club 100: With a 31-yard touchdown pass to Moore in the first quarter, Ehlinger entered into elite company. It was the 100th touchdown that Ehlinger has been responsible for in his career.

Only one other Longhorn had accounted for 100 touchdowns. Colt McCoy was responsible for 132 from 2006-09.