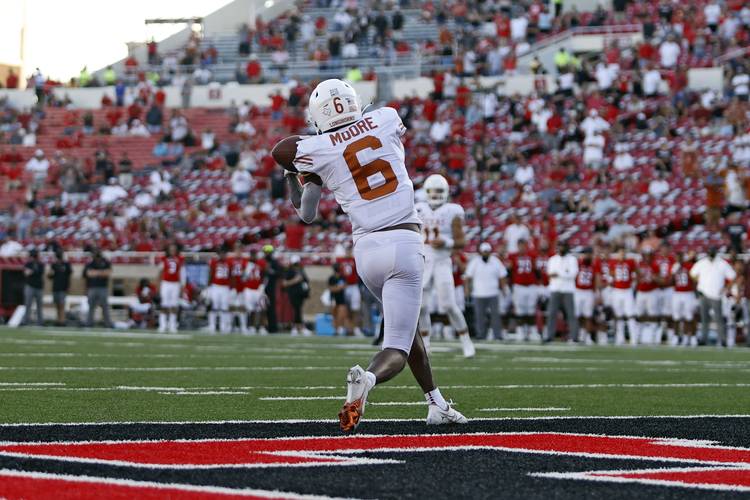 There were 165 snaps taken in No. 8 Texas’ 63-56 overtime win at Texas Tech on Saturday. Here are five that ended up making a big difference:

In its opener against UTEP, Texas needed only one play to score as Joshua Moore turned the season’s first snap into a 78-yard score. Two weeks later, it took a little longer to reach the end zone. But the end result was still the same. After receiving the opening kickoff, the Longhorns drove 75 yards in 13 plays. Quarterback Sam Ehlinger eventually scored on a 2-yard run.

But on a night that featured 119 points and 917 yards, Texas did not have the only offense that was revved up and ready. On its first drive, Texas Tech covered 75 yards in six plays. After a 13-yard touchdown catch by KeSean Carter, the scoreboard featured an early tie.

Texas gave up 21 points in the first half, but the defense was able to take credit for the team’s 10-point lead at halftime. Thanks to two gaffes on special teams — an onside kick that Texas Tech recovered and a blocked punt by the Red Raiders — Texas twice had its back to the wall in the second quarter.

Big CB with the INT.

Another big defensive play for @TexasFootball! @Ceewavvy1 gets the Longhorns' second INT of the day 💪 pic.twitter.com/P0ZyKwj1pL

But on the play following the onside kick, UT safety Chris Brown intercepted a deep throw by Red Raiders quarterback Alan Bowman. Later in the second quarter, Bowman was picked off by defensive back Chris Adimora. Adimora’s interception came after the blocked punt gave Tech the ball at UT’s 17.

Both turnovers led to points for Texas. Brown’s pick st up a touchdown run by Roschon Johnson, and Ehlinger threw for a score three plays after Adimora ran back his pick to Tech’s 19.

Despite the double-digit deficit at halftime, the Red Raiders battled back and took their first lead on the third quarter’s final play. Texas Tech later extended its advantage to eight points with 6:12 left. SaRodorick Thompson then gave the Red Raiders a 56-41 lead on his 75-yard run with 3:13 remaining.

Texas had not allowed a run of at least 70 yards since TCU’s Darius Anderson scored from 70 yards out. That run was recorded during the final game of the 2016 season.

Following Thompson’s touchdown, Texas was down but not out. On the ensuing drive, Ehlinger directed a four-play touchdown drive that took 34 seconds off the clock. After UT recovered an onside kick of its own, the Longhorns ran five more plays before Ehlinger found Moore for an 18-yard score.

With 40 seconds remaining in regulation, Ehlinger connected with receiver Brennan Eagles on the two-point conversion. On that attempt, Texas had split three pass-catchers and running back Keaontay Ingram to Ehlinger’s right. That left an isolated Ja’Marcus Ingram to cover Eagles, who ran a slant route.

Ehlinger explained afterward that Texas ran different plays out of that same formation on previous two-point successes against Georgia and Oklahoma State. West Virginia used that formation on a game-winning two-point conversion against Texas in 2018.

The offense kept rolling in overtime. Given the ball first, Texas opened the extra session with a short pass and a 12-yard run by Ingram. Ehlinger and Moore then connected on their third touchdown of the day.

Tech failed to gain any yards on its overtime possession. On third down, the Longhorns even thought they won the game on a lost fumble by Thompson. But after a review led to the ruling that the pass to Thompson was incomplete, a desperation heave by Bowman was intercepted by Caden Sterns.

Texas allowed 441 yards of offense in Lubbock. The 56 points it surrendered were the eighth-most in school history. Yet Ehlinger said he was confident that the defense would close out the game after Moore’s catch gave the Longhorns the 63-56 lead.

“After we scored in overtime, I knew that our defense was going to go out there and get (the stop),” Ehlinger said. “I just felt that we had all our confidence back. I think that we kind of fell asleep in the middle of the game and woke back up and realized here we are, and I think that was very mature step for us. It’s something that needed to happen.”