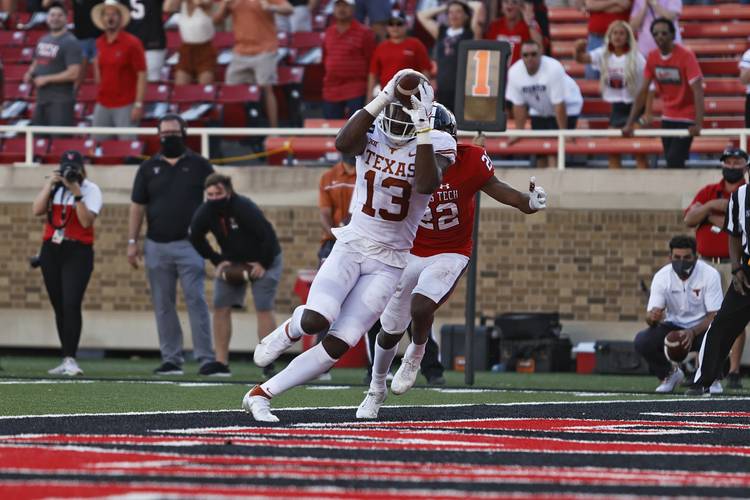 Facing a two-point conversion that could potentially make or break its season, Texas had a play-calling dilemma on Saturday.

Use a play that’s worked before? Or mix things up and try to catch the Texas Tech defense off guard?

The Longhorns went with both options.

That decision proved to be the correct one. With 40 seconds left, Brennan Eagles caught a game-tying strike from Sam Ehlinger. The eighth-ranked Longhorns (2-0) eventually secured a 63-56 win in overtime.

“The good thing is we found a way down 15 with three minutes and some change left to tie the thing up and win it in overtime,” Texas coach Tom Herman said. “We made big plays when we needed to.”

Texas trailed by eight when Ehlinger connected with Joshua Moore on an 18-yard touchdown pass to make it a 56-54 game. Since Texas didn’t have any more timeouts and the clock was a factor, the Red Raiders likely would have secured a victory with a stop. If Texas succeeded, overtime was almost assured.

On the two-point play, Eagles split out to the left. Texas sent three additional options — Moore and tight ends Cade Brewer and Jared Wiley — to the right. UT running back Keaontay Ingram lined up behind Brewer, Moore and Wiley. With Tech cornerback Ja’Marcus Ingram isolated, Eagles ran a slant route and tied the game.

If Texas fans thought they were experiencing a case of déjà vu, there’s a reason. Herman said the Longhorns ran the same play that West Virginia ran to beat the Longhorns two years ago.

In 2018 in Austin, West Virginia went for the win, not the tie, after scoring with 16 seconds left to cut Texas’ lead to 41-40. Using a similar formation, Mountaineers quarterback Will Grier hit David Sills on a slant in the end zone. That conversion, though, did not count since Herman had called a time out just before the snap.

West Virginia lined up in the same formation following the time out, but Grier kept the ball and got the winning two points with his legs.

“It’s a multifaceted play, if you will,” Herman said.

Herman declined to name all the options afforded by that two-point formation. His quarterback, however, was more specific.

Ehlinger recalled that Texas ran different plays out of that formation when it went for two against Georgia in the Sugar Bowl and against Oklahoma State last season. Playing the role of Eagles, Collin Johnson caught a fade in the Sugar Bowl. Ehlinger threw it to Roschon Johnson in the Oklahoma State game, and the running back followed a wall of blockers into the end zone. Texas also lined up in the formation for a two-point try in last year’s 49-24 win over Tech, but UT moved its running back to the backfield following a timeout.

On Saturday, Ehlinger asked Eagles if he wanted to go with a slant or fade. With the Longhorns expecting man coverage, Ehlinger was leaning toward a fade. The 6-4, 229-pound Eagles preferred to run a slant against the 6-2, 195-pound Ingram.

“Luckily they blitzed and they brought everybody, which opened up the slant window,” Ehlinger said. “At first I was going to try to put him on a fade because they had that Will linebacker standing right there. Luckily they came and blitzed and he obviously got incredible separation and made a play.”

Texas has converted four of its six two-point plays under Herman. On Saturday, Moore said he wasn’t surprised by either the play that Texas called or the result. The Longhorns often simulate these situations in their practices, he said.