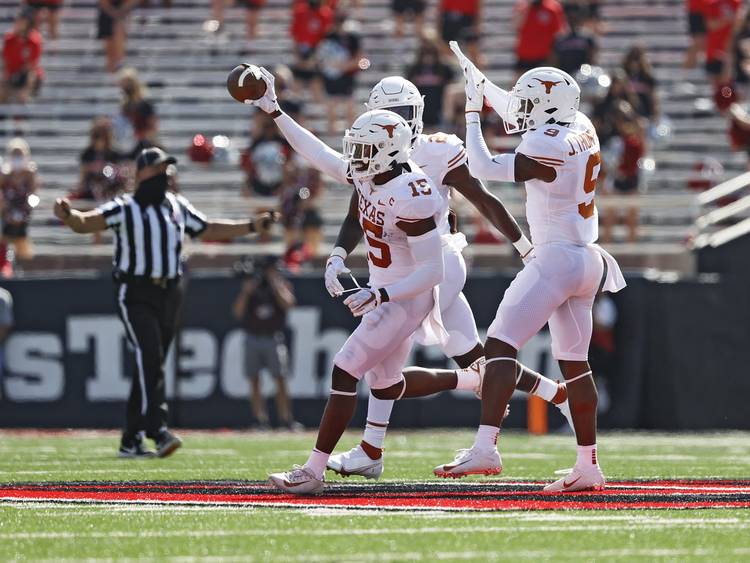 Texas' Chris Brown (15) celebrates after intercepting a pass during the first half of an NCAA college football game against Texas Tech, Saturday, Sept. 26, 2020, at Jones AT&T Stadium in Lubbock, Texas. [Brad Tollefson/A-J Media]

Eighth-ranked Texas had to rally late to force overtime and then beat Texas Tech in Lubbock, improving to 2-0 on the season and a 1-0 start in Big 12 play.

Sam Ehlinger played like a Heisman front-runner (outside of the third quarter). His ability to stay calm and in charge allowed the Longhorns to erase a 15-point deficit in the final minutes and then win in overtime. He finished with 262 yards and five touchdown passes to just one interception. He was 27-of-40 through the air, adding 69 yards and a touchdown on 16 attempts. This wasn’t an A game for Texas’ best player, but he led the team to 63 points, including 25 in the fourth quarter and overtime. His composure and talent allowed the Longhorns to remain in control of their own destiny in the Big 12.

Keaontay Ingram individually deserves an A; he led the team with 89 yards, averaged 7.4 yards per carry and added three receptions. Roschon Johnson added 44 yards on 16 carries while Bijan Robinson had a pedestrian 12 yards on four carries before leaving the game with an injury. The running backs weren’t great besides Ingram, who didn’t get enough touches to make a major impact. If you add Ehlinger’s 69 yards on 16 carries, Texas’ rushing game averaged 4.5 yards per carry.

The receivers turned in another solid performance. Joshua Moore continues a strong return to the team, collecting five catches for 73 yards and three touchdowns. He has four scores for the season. Grad transfer Brenden Schooler recorded a team-high seven catches from the slot in place of the injured Jake Smith and Jordan Whittington. Brennan Eagles caught three passes for 31 yards and a touchdown and converted the key two-point conversion to force overtime on a tremendous slant route. The trio of Moore, Eagles and Schooler appear to be the go-to targets with Whittington and Smith out. Walk-on Kai Money caught four passes for 39 yards. Marcus Washington had two catches for 13 yards.

The tight ends were quiet, accounting for only one of Texas’ 27 receptions. Cade Brewer caught one pass for 11 yards. Jared Wiley was utilized as a blocker. Malcolm Epps did recover the onside kick to save the game, though.

The line didn’t play well despite the offense scoring 63 points. The running game averaged fewer than five yards per carry against a porous Tech front seven. The Red Raiders defense managed to pressure Ehlinger throughout the second half. Texas Tech had two sacks in the fourth quarter that could have ended the game had the UT defense not come up with a couple of important stops. The group was also responsible for several penalties, including a couple of costly holds and a 15-yard chop block. The right side of the line struggled.

Season stats: Ehlinger has been sacked twice in 73 drop-backs.

The defensive line escapes a failing grade because of its success in stopping the run on Saturday — save for that one 75-yard touchdown run by SaRondorick Thompson that appeared to put the game away in the fourth quarter. The pass rush was virtually non-existent; the Longhorns didn’t record a single sack against a Tech line that surrendered six of them to Houston Baptist two weeks ago. Expectations were high entering the season for new Jack end Joseph Ossai, but he has been quiet outside of one defensive series. Ta’Quon Graham had a team-high two tackles for loss and former tight end Reese Leitao flashed on a few plays.

Season stats: The Horns have two sacks in 91 quarterback drop-backs this season, and only one from a lineman.

Juwan Mitchell and DeMarvion Overshown were OK in run support, but it was a mostly forgettable day for Texas’ starting linebackers. Missed tackles plagued the group, especially Overshown, who looked uncomfortable at times in his second game at the position. The former safety had two tackles, including one for loss. Mitchell finished with five tackles, which was tied for second most on the team.

The coverage was bad. The tackling was atrocious. The lone bright spot was that the DBs recorded three interceptions, including the one by Caden Sterns to end the game in overtime. B.J. Foster made headlines after the UTEP win when it was revealed that the former five-star recruit had quit the team sometime in the third quarter. He was back on the field Saturday in Lubbock, leading the team with seven tackles. Chris Adimora was close behind with five, and both he and Chris Brown had interceptions.