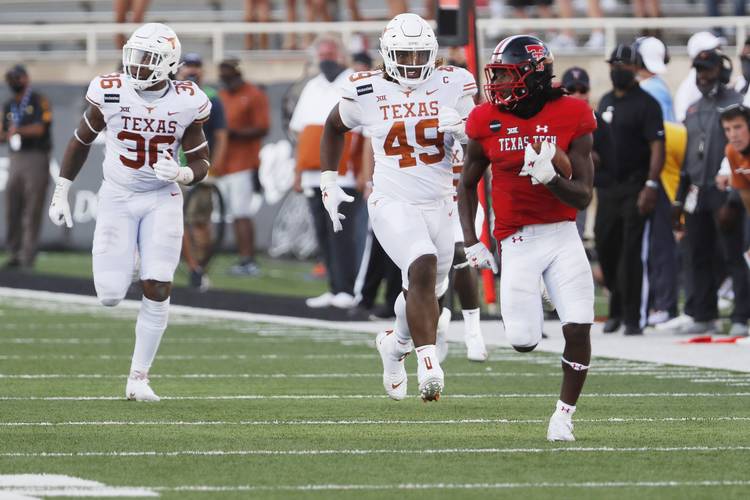 Texas Tech running back Sarodorick Thompson runs for a touchdown late during the second half of an NCAA college football game against Texas Tech, Saturday Sept. 26, 2020, in Lubbock, Texas. (AP Photo/Mark Rogers)

Tom Herman woke up on Sunday and watched the video of Texas’ 63-56 overtime win over Texas Tech with renewed hope. Surely, the defense, with all those missed tackles, couldn’t have been that bad, right?

“Yes, it was as bad as I thought it was,” the Texas coach said Monday.

“Our players on defense, they’re embarrassed,” Herman added. “They watched the same video you watched, and they were part of the same game everybody else saw. They know they’ve got to tackle better.”

“It wasn’t for the most part any missed assignments or being out of position,” Herman said. “We just didn’t finish plays when we needed to.”

The ninth-ranked Longhorns (2-0, 1-0 Big 12) can take solace in the fact that they’re still undefeated. Still, it could be a long week at practice as UT prepares for TCU (0-1, 0-1). Anyone think Herman goes easy?

“They won the game. They’re happy they won the game,” Herman said. “But they understand we can’t accomplish our goals playing like that each and every week.”

Tech piled up 441 total yards, but healthy portions came after first contact. Herman had several theories about the missed tackles after watching the film and talking with coaches and players.

First, Tech’s speed was dramatically faster than UTEP’s. Herman said after the game “hopefully this humbles some guys out there that thought this was going to be easy.”

The Horns simply haven’t practiced tackling all that much. Spring football was canceled because of the pandemic. There was, as Herman pointed out, “a very truncated and unusual training camp” with limited contact. Once the season begins, teams usually have only one full-contact practice per week.

“We’re certainly not just going to line up and scrimmage our No. 1 offense every day in practice to get that done. That’s not real smart,” Herman said. “So, we’ve got to continue to work our drills, add some more drills. We’ve got to stress the importance of carrying those drills over into the game.”

There were some positives during Herman’s Monday press conference.

Injury wise, running back Bijan Robinson appears to be fine after an incredible play where he got bent backward trying to hurdle a would-be tackler. His back and lower torso were essentially flipped over his head, almost in a 180-degree fashion.

“I don’t know medically how he is OK after that, after seeing the still shots of it and whatnot,” Herman said. “Probably a testament to his athleticism and his fluidity.”

Herman expects to have receiver Jake Smith (hamstring) back on the field this week against the Frogs. Smith gives the Horns another solid slot receiving threat. Fellow slot receiver Jordan Whittington is still not expected back for a few more weeks.

And Herman also felt much better about the offensive line after watching the game again Sunday.

“I thought we opened up holes in the run game better than I thought,” he said. “We can still handle some movement and pressure a little bit better up front, especially in the run game. But I thought they did a pretty good job, as unconventional as Texas Tech’s defense, is at providing some good running lanes for our tailbacks.”

Texas piled up 214 rushing yards against Tech and averaged 4.5 yards per carry. Keaontay Ingram had 89 yards on the ground and 109 total. Ehlinger ran for 69 yards and scored on a 2-yard touchdown keeper, his first rushing score of the season. His 24-yard run straight up the middle also set up another score.

The half-hour Zoom call kept coming back to defense and special teams, two areas that Herman openly admitted needed to be shored up. He spoke about the importance of having starters on special teams while mixing in highly-touted freshmen.

Asked about Texas’ blocked punt, Herman said it was “the same scheme we’ve been running for four years” and it was just a missed block. “The punter didn’t hit his launch point, and so the guy got closer than expected.”

In 2017 and 2018, Herman would’ve chafed at questions about football minutia. But now, the microscopic details definitely matter. Texas is a team that has a legitimate chance to win the Big 12 and compete for a national title. Every detail matters.

Herman knows the Horns must get better if they have any chance to reach higher ground.

“I think every game you better flush by the time you hit the sack Sunday night,” Herman said. “Whether you win a game, you want to learn from the mistakes make. Nobody’s ever played a perfect game, and there’s always things to improve upon. It does help, though, when you have to learn some very hard lessons and you still wind up wining.

“The reason is you can coach them hard,” the coach added. “They’re very receptive to the coaching.”

Oh dear. In coach-speak, Herman’s got a green light to turn the practice fields into Junction.

Nope, this will not be an easy week of practice at all.