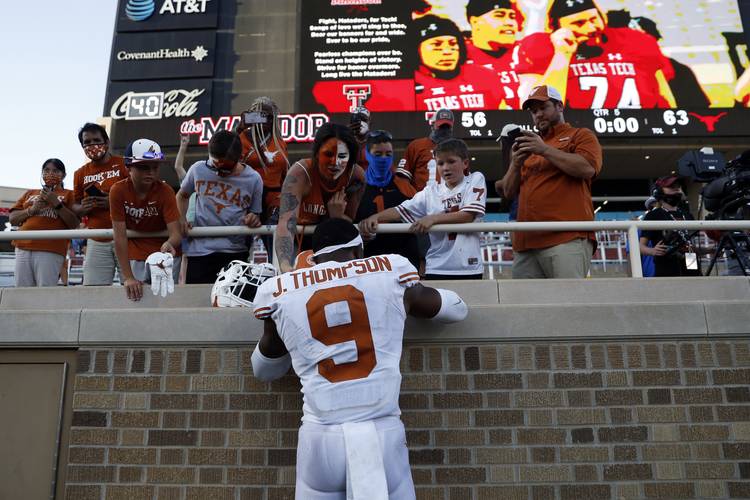 So, what’s new with Josh Thompson these days?

The Texas junior has a new number this season, having made the switch from No. 29 to 9.

That backpedaling and leaping interception in the season opener against UTEP? That’s a new clip for Thompson’s highlight reel.

He even has a new battle scar. Thompson can thank the lacerated ear that he suffered against the Miners for that.

Perhaps most notably for fans, though, is Thompson’s new position. After specializing on special teams and at nickel back over his first three years, he’s now starting at cornerback for the ninth-ranked Longhorns (2-0, 1-0 Big 12).

Texas hosts TCU (0-1, 0-1) on Saturday. The Horned Frogs have won five of the last six meetings; in last year’s 37-27 win in Fort Worth, TCU quarterback Max Duggan threw a pair of touchdowns and led the team in rushing.

Thompson once was committed to TCU, but eventually flipped his pledge to Texas and former Longhorns coach Charlie Strong. He remained a part of UT’s class after Tom Herman was hired in late November 2016.

“At the end of the day, I came here to be a cornerback,” Thompson said on Tuesday. “I’m going to put my team before myself, and I’ll do anything to help my team at either position that I play.”

Thompson was indeed recruited as a cornerback. Back in 2017 he was rated as the nation’s No. 35 cornerback prospect. The Nacogdoches product was given a four-star designation.

But when he got to Texas, reps at cornerback were limited. Thompson instead made his mark on special teams.

Josh Thompson's hustle and blocking throughout the play deserves some sort of applause. #HookEm https://t.co/lQemModL5B

As a freshman, he helped UT pin six of Michael Dickson’s punts inside the 5-yard line. He downed two of those punts at the 1. In 2018, Thompson showcased his speed and physicality while blocking on D’Shawn Jamison’s 90-yard punt return at Kansas State.

That season, Thompson started at nickel against Tulsa, USC and West Virginia. He continued to contribute there before a foot injury ended his 2019 campaign. After the season, new defensive coordinator Chris Ash and assistant coach Jay Valai saw the 6-foot, 198-pound defensive back as more of a cornerback. That led to a new role.

Earlier this month, Ash told reporters that he is “really high on Josh.” What has stood out? Thus far, his talent, work ethic and leadership, Ash said.

“I’ve been around some outstanding defensive backs and I would put Josh in the category with some of the best ones I’ve been around,” Ash added. “Now he’s got to go out and perform that way consistently throughout the season. I hope we have a lot of fun watching him make plays here throughout the year.”

Josh Thompson with the hands.

Last Saturday, Texas surrendered 331 yards and five touchdowns through the air in a 63-56 overtime win at Texas Tech. Thompson was bested for one of those touchdowns, T.J. Vasher’s 18-yard fingertip snag in the fourth quarter.

But against UTEP, he shined with a highlight-reel interception. He also recorded two tackles before that lacerated ear ended his night. PFF College rated him as the nation’s second-best cornerback during that week of action.

Thompson reflected that last year’s injury “matured me a lot. You never know when your last down could be and how that can play out for you.” The broken bone in Thompson’s foot was suffered in the Longhorns’ fourth game, so Thompson was able to redshirt. A year later, the foot feels fine. Yet he still feels the need to constantly work on his footwork after practices.

“Athletically, he’s a freak,” Texas defensive lineman Ta’Quon Graham said. “He’s had a lot of ups and downs with injuries since he’s been here. Being moved around from corner to (nickel back) back to corner, I felt like he’s handled that transition perfectly.”