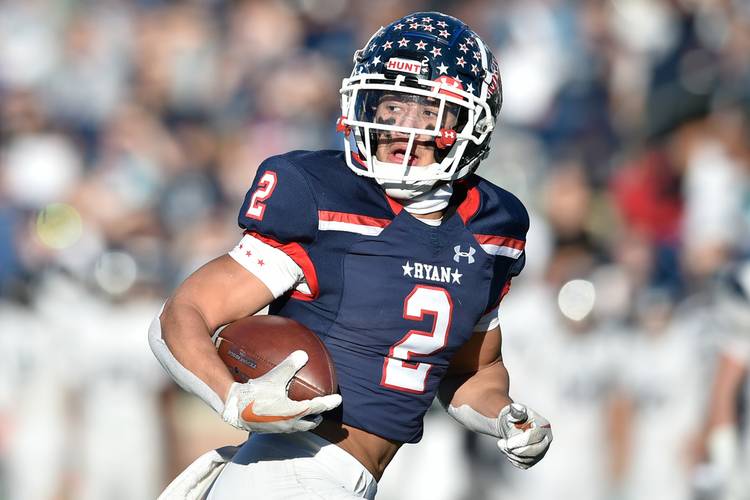 ARLINGTON — Three Texas commits competed in the same game last Friday at AT&T Stadium. Denton Ryan bested Arlington Martin as UT pledges Ja’Tavion Sanders and Billy Bowman Jr. scored touchdowns in the win over Morice Blackell’s squad. Bowman caught a touchdown on the opening drive and started at safety. He cramped up in his first game action since the 2019 year.

“I have to do a better job staying hydrated. I started cramping up in the second half. It’s a hard grind to play both ways the entire game,” Bowman said. “I probably run five miles a day in practice. It’s about staying hydrated and keeping my body up to place.”

Ryan looked like a team ready to compete for a Class 5A Division I title during the 47-24 win over a 6A program. Ryan lost in the state championship game to Alvin Shadow Creek in 2019. Shadow Creek is now in Class 6A, leaving the door open for Ryan to capture its first state championship. If the Raiders pull it off, it’ll be in large part because of defense with eight starters holding at least one Power Five offer.

“The talent on the defense pushes each other. We work really hard in practice. No one wants to be outworked,” Bowman said. “It felt great to play against another team and see where we’re at as a squad. The team was so explosive. You only got a glimpse of what we can be. We could play better.”

Bowman and Sanders are teammates who plan to continue teaming up after arriving in Austin. Both start on offense and defense. Neither is ready to declare his future position in college. Sanders is a wide receiver and defensive end. Bowman is a slot receiver and safety. They are the top-ranked players in Texas’ 2021 class, which consists of 18 recruits and ranks 15th in the nation.

“We try not to talk about the future. Our saying at Ryan is ‘one’ because we’re trying to take it one play at a time, one game at a time,” Bowman said. “We’re both excited to keep playing with each other when we get to Texas, but our focus is not on that right now.”

The Longhorns won Bowman’s commitment for one simple reason.

“The relationship between me and coaches was unlike any other college,” he said.

Another name to know in the Ryan secondary is Austin Jordan, a junior cornerback who already holds an offer from the Longhorns. The 5-11, 185-pound recruit out of the 2022 cycle is considered a national top-200 prospect and the 19th-best cornerback in the class, according to the 247Sports’ composite ranking. Jordan holds 19 offers. The Texas commits on his team are already working on adding him to their future roster in Austin.

“Billy (Bowman) and Ja’Tavion (Sanders) stay on me about Texas,” Jordan said. “They always tell me to throw up the Horns.”

Jordan said after the game that he hears the most from Texas, Oklahoma, Kansas State and Ohio State. He also said that it is too early to make a decision and that the impact of COVID-19 on campus and travel in the offseason set his process back, as it did with many recruits in the 2022 cycle. He does know what traits he’s looking for in a college, however.

“It’ll be about the campus, the coaches and how I feel when I visit,” Jordan said. “It’s a big decision. I need to get as much information as possible before I make a decision.”

Texas already holds a commitment from a cornerback in the 2022 class. The Longhorns hope to add two more with Jordan and five-star Denver Harris as the top targets. Jordan and Harris play on state championship contenders with Harris starting for two-time defending Class 6A Division I state champion Galena Park North Shore. Jordan felt his team, specifically his defense, proved a point in the opener.

“We came ready to play. Our defense came out and played fast against a solid offense. We felt a little disrespected going into the game, so we wanted to prove a point,” Jordan said. “We go at it in practice everyday. It makes us all better.”