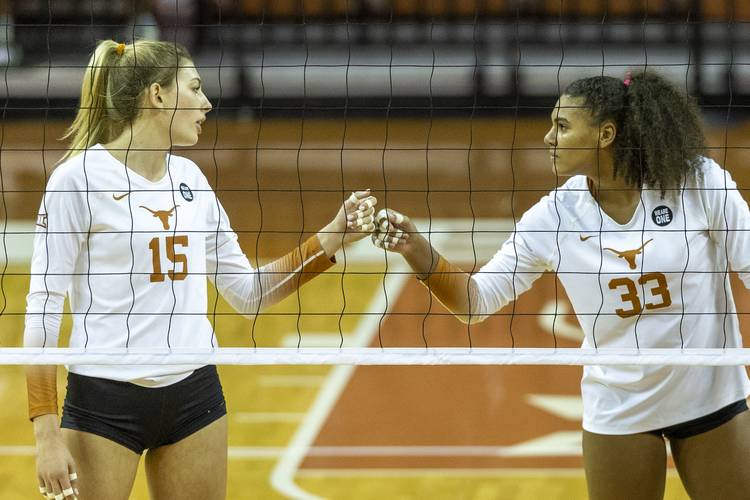 Texas middle blocker Molly Phillips (15) and outside hitter Logan Eggleston (33) prepare to compete against Kansas at the Erwin Center, on Oct. 1, 2020. [Stephen Spillman for Statesman]

During the first day at its new home, Texas got out the brooms.

Logan Eggleston’s 16 kills guided the Longhorns to a 25-22, 25-19, 25-22 sweep of Kansas on Thursday night at the Erwin Center. It was Texas’ first match there since 1997. Due to pandemic protocols, Texas is playing its home matches this fall in the spacious Erwin Center instead of the compact Gregory Gym.

“We were really excited just to be able to play at home and kind of test out the Erwin Center and see what it was going to be like playing here,” junior setter Jhenna Gabriel said. “I think we just went out there, we had a lot of fun, we played our game and it ended up working out for us.”

Texas built a couple of five-point leads in the opening set, but runs from Kansas kept the Longhorns from coasting. After a Texas timeout, Kansas committed a service error and an attacking miscue to close out the set.

Texas hit .326 in the second session, leaving the Jayhawks behind after breaking a 9-9 tie with an 8-2 run. The third set featured four ties — there were 18 in all — but UT led the rest of the way after an Eggleston kill made it 18-17.

Added Eggleston: “I think it’s really important that we have competition like that because it makes us better. Tonight we’re going to watch some film and really learn from the game tonight and just come out better tomorrow.”

Eggleston did her damage on 38 swings. Skylar Fields added 11 kills. Texas has only five healthy attackers on the roster, and they accounted for 47 of the team’s 48 kills. Gabriel, who directed the offense with 43 assists, had the other kill.

“Just seeing how much of a weapon every single one of our hitters are is really cool,” Gabriel said. “It’s even better that it’s showing up in the stats for us, too.”

Defensively, Texas got 11 digs from Sydney Petersen and 10 from Gabriel. Butler recorded a team-high five blocks. Texas held Kansas to a .160 hitting percentage.

The players on the volleyball team remained huddled during the Eyes of Texas. #HookEm pic.twitter.com/0rXTt8syu3

Notes:  After the match, Texas players huddled on the court and did not acknowledge the playing of “The Eyes of Texas.” Before the match, players linked arms during the national anthem and the team’s Black Lives Matter video was played on the overhead scoreboard. … Kansas was led by Jenny Mosser’s 15 kills. … In her UT debut, freshman Reilly Heinrich came off the bench in the opening set and contributed an ace. She graduated from nearby Rouse High in 2020.