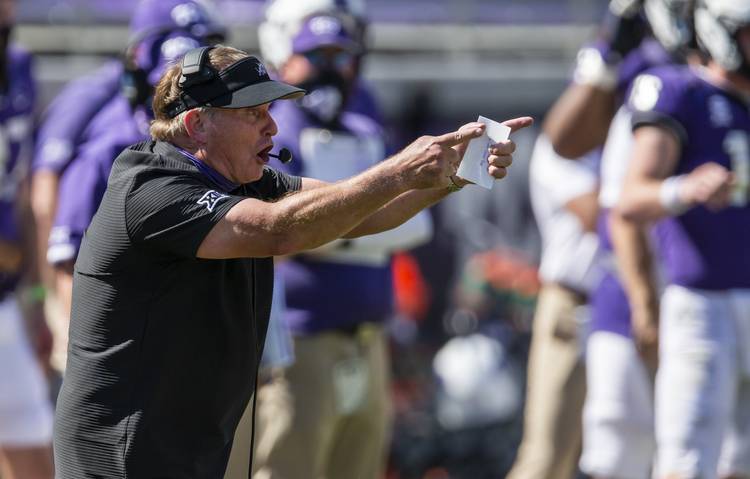 Some of us can’t remember what we had for breakfast, let alone what happened yesterday, last week or last year. It’s funny, that doesn’t apply to TCU fans when it comes to Texas.

Those in Fort Worth can recite chapter and verse how TCU is 6-2 over Texas since the little private school from the Mountain West joined the big, bad Big 12. That includes a 3-1 record at Royal-Memorial Stadium.

TCU’s sports information department loves touting one particular nugget. Since 1996, Patterson is No. 1 nationally among all head coaches “past and present” with a .667 winning percentage against Texas for those who have played at least five games against the Longhorns. Patterson is 6-3 all-time against Texas.

“Oh, I don’t know. I’m not going to give any bulletin board material here,” Patterson said on the Big 12 coaches teleconference. “Our kids like playing against Texas.

“Just got to be honest, a lot of kids, that’s where some of them when they’re going up, they all wanted to go play,” he added. “And they didn’t get offers to go there. So they want to be able to show that they have the ability to play wherever they want to play.”

Now TCU fans have been known to go overboard at times. Patterson didn’t say anything remotely controversial this week, and neither did Texas’ Tom Herman. The Internet, where going off half-cocked is often encouraged, says otherwise.

During his Monday press conference, Herman was asked about his 1-2 record against TCU the last three years. After every game, no matter the outcome, the Horns came away frustrated. Playing TCU is simply that difficult.

“It gets frustrating sometimes because Gary, to his credit and a ton of respect for him, doesn’t do a whole lot,” Herman said. “What he does is he’s got his players to play really, really hard. He puts them in great position.

“They’re extremely fundamentally sound,” the Texas coach continued. “You have this false sense of maybe some confidence because unlike other defenses you play where half the battle is figuring out where they’re going to be lined up, blitzing from and rushing from, all that stuff — that battle is not one that’s waged a whole lot against coach Patterson’s defenses.”

“The battle is can we play more fundamentally sound than them? Can we play harder than them?”

In 2017, the 10th-ranked Frogs put together a rather methodical 24-7 victory in Fort Worth. The following year in Austin, the Horns trailed by six in the third quarter, converted two turnovers into points and made some key plays down the stretch to win 31-16. It was the first time had Texas even led TCU on the scoreboard since the 2013 season.

Then last year, TCU freshman quarterback Max Duggan had a terrific day as the UT defense gave up 435 yards. Quarterback Sam Ehlinger threw a career-high four interceptions. A .500 team got the better of a squad that still had slim College Football Playoff hopes at that time. “We’re not good. And we need to be better,” Herman said afterward.

Fast forward to the here and now. Duggan missed some of preseason camp because of offseason surgery. Patterson said his quarterback needed to get in better shape having missed so much time. The Frogs started sophomore Matthew Downing in a season-opening loss to Iowa State. Duggan came in after halftime and was 16-for-19 for 241 yards and threw three touchdowns.

Any team’s offensive prowess should be carefully examined after Texas’ defense missed so many tackles last week at Texas Tech. Defensive coordinator Chris Ash said the Horns missed nine tackles against UTEP. He wouldn’t put a number on it after the Tech win.

“I wouldn’t be able to give you an answer right now. Too many of them,” Ash said. “I never would have seen that coming.”

Speaking for the entire team, Ehlinger said, “we can’t control the past, all we can do is learn from it. And the biggest thing is paying attention to details.”

TCU’s defense, with outstanding safeties Trevon Moehrig and Ar’Darius Washington, will face a Texas offense that’s off to a scorching start. The Horns have run up 122 points in the first two games. Last week’s 15-point comeback in the final five minutes was the biggest turnaround known in school history.

It’s an offense that already has four scoring drives lasting 10 plays or more. But it’s also an offense fine-tuning the running game. Offensive coordinator Mike Yurcich prefers to focus on the yards per carry (5.2) rather than the total (422).

Texas is expected to have receiver Jake Smith (hamstring) back in the mix. He’s missed the first two games. Running back Bijan Robinson somehow emerged OK after that scary mid-air flip against Tech last week.

The Horns have not started a season 3-0 since 2012. They’ve somehow managed to stumble somewhere in early September every year since. But now, it’s October. And if Texas can get through this unscathed, Herman’s club would carry good momentum into the Oklahoma game.

There’s just one problem. It’s not Iowa State. Or Kansas. Or Kansas State. This is TCU, a program led by someone well versed in the aw-shucks routine long after he’s beaten you into submission.

“I think our kids they just like playing against Texas,” Patterson aid.