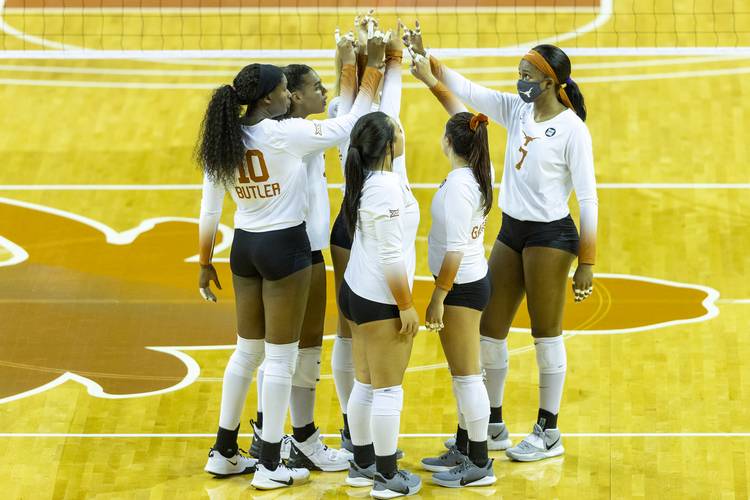 Texas prepares for the third set of a match against Kansas at the Erwin Center on Oct. 1, 2020. [Stephen Spillman for Statesman]

Rarely trailing, Texas volleyball got its weekend started Friday night with a 25-20, 25-19, 25-15 sweep of Kansas at the Erwin Center, one night after the Longhorns earned another 3-0 victory at home at the Jayhawks’ expense. It was the third sweep of the season for Texas (4-0), which has dropped only one set this season.

Had this been a normal season, these two matches against Kansas would have been spread out over a few weeks. The Jayhawks also would have played one of those matches at their house. But due to the coronavirus pandemic, the Big 12 scheduled eight weeks of two-game series for each school. The Longhorns won’t travel to Kansas, Iowa State, Texas Tech and Baylor. Last Thursday and Friday, Texas recorded 3-0 and 3-1 wins at Oklahoma.

The act of playing on consecutive days is not a foreign concept at Texas. The Longhorns have gotten used to doing just that in the NCAA tournament. Early-season showcases also feature matches on back-to-back days.

But Texas is not accustomed to playing the same opponent on consecutive days. Before this season, that last happened in 2012. The schedule hadn’t featured Big 12 battles on back-to-back dates since 1999.

That scheduling setup, of course, is not universal. UT libero Morgan O’Brien, who had a team-high 15 digs on Friday, is a graduate transfer from Illinois. Four times last year, Illinois had conference matches on consecutive nights.

“It’s really interesting because we talked a lot like, ‘Oh, we have to play two nights in a row,’ and for me that’s so normal,” O’Brien said. “The recovery (is key). Just getting a good night’s sleep and going home and taking care of our bodies. We’ve been doing that, so it’s really paying off. We feel good.”

Texas coach Jerritt Elliott agreed with O’Brien’s assessment about recovery. He credited longtime trainer Deann Koehler for her treatments following Friday’s sweep. Elliott added that he thought this is a beneficial setup when it comes to scouting reports and preparing for an opponent.

“What I don’t like about it is just the quick turnaround,” Butler said. “We have to get back, we have to do recovery fast. It is nice to play the team (back-to-back) just to get them out of the way so you don’t have to travel there and to just take of business really quickly. I really like it.”

Aside from an early deficit in the second set, Texas never trailed over the first two sessions. The Horns hit .250 over that stretch — a percentage 96 points below its season average and 75 points below last year’s NCAA-leading mark — but Logan Eggleston and Skylar Fields had only two fewer kills between them than Kansas’ entire team.

Texas scored the first six points of the final set. Kansas never got closer than four points for the rest of the match, and Texas extended its lead to as many as 11. After the match, Elliott said he had recently spoken with his team about closing out matches and the importance of not letting up.

“I thought they were dialed in the whole night,” Elliott said. “It means that they’re actually taking this to heart and it was a big step for us. We’ll see if we can do it a second time.”

For the fourth time this season, Eggleston led the Longhorns in kills. Eggleston’s 18 kills were supplemented by 10 kills from Fields and Jhenna Gabriel’s 31 assists. Texas held Kansas to a .075 hitting percentage.

Notes: Texas will host Iowa State on Thursday and Friday next week. Those two teams were ranked first and 13th in the AVCA’s fall poll this week. … Texas sophomore Asjia O’Neal led all players with six blocks. … No Jayhawk had more than six kills. … Texas averaged 1,452 fans over its first two matches at the Erwin Center. Only 1,500 seats are expected to be available for each home match.