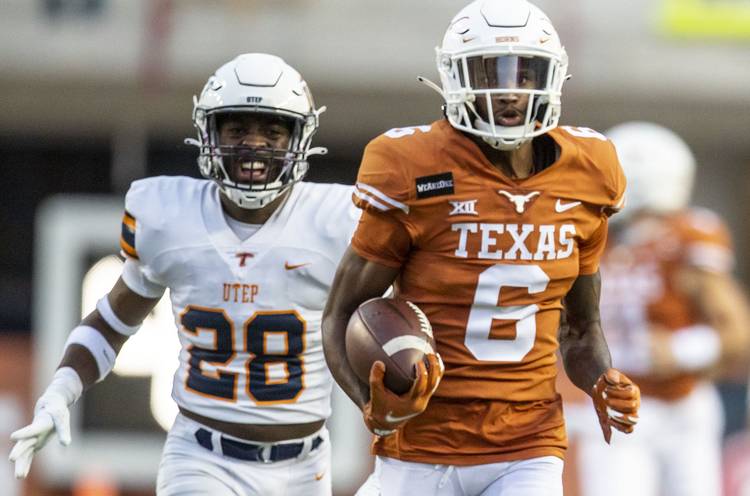 Five questions facing No. 9 Texas on Saturday against TCU:

1. Will Texas get to TCU quarterback Max Duggan?

Texas opened its season with a new look on its defensive line and a new pass-rushing role for All-Big 12 preseason pick Joseph Ossai. But the Longhorns have been credited with only two sacks and two quarterback hurries through two games, with both sacks coming from backups in the fourth quarter of the season-opening 59-3 win. UTEP and Texas Tech quarterbacks have 50 pass attempts. Last week, in TCU’s season-opening loss to Iowa State, the Horned Frogs gave up six sacks.

2. Can the TCU secondary cool off Joshua Moore’s hot hands?

Devin Who? Collin What? With Devin Duvernay and Collin Johnson now in the NFL, Moore has helped fill the void in the UT receiving corps. He recorded a 78-yard touchdown catch on the first play of the season, and he followed that up with three touchdown catches last week in Lubbock. The second of those touchdowns against Texas Tech helped UT tie the game, and his overtime score accounted for the winning points. If Moore scores against TCU, it will mark the 18th time that a Longhorn has caught a touchdown in three straight games.

3. Will this game feature a highlight from either Bijan Robinson or Zach Evans?

Texas freshman Bijan Robinson and TCU’s Zachary Evans were the No. 1 and No. 2 running back prospects in the country for the 2020 recruiting cycle. But a head-to-head showdown may have to wait. Robinson suffered a strained back last week after landing awkwardly on an attempt to hurdle a Texas Tech defender. On Monday, UT coach Tom Herman said he was expected back at practice this week. Evans, meanwhile, did not play in TCU’s opener. TCU coach Gary Patterson told reporters that Evans had previously missed almost a month of workouts because of COVID-19 contact tracing and wasn’t ready. Evans did practice earlier this week.

4. Does Texas bounce back on special teams?

Against Texas Tech, the Longhorns were less than special on special teams. The punt team had a punt blocked and another shanked kick that set up a Red Raiders score. In the second quarter, Tech recovered an onside kick. UT’s D’Shawn Jamison lost a muffed punt that Texas Tech recovered in the end zone. Texas boasts one of the conference’s top kickers in Cameron Dicker, and Jamison has returned both a punt and kickoff for touchdowns in his career. Will more highlights or lowlights be recorded on special teams?

5. Will the higher-ranked team avoid the upset on Saturday?

Texas is ranked ninth in the country. That may not be a good thing, though. In each of the past two meetings between these two schools, the ranked team was upset. Two years ago in Austin, Texas recorded a 31-16 win over the No. 17 Horned Frogs. Last year, Texas arrived in Fort Worth with a No. 15 ranking and departed with a 37-27 loss. Ranked TCU teams did take care of business against Texas in 2014, 2015 and 2017, but the No. 18 Longhorns were also upset by TCU in 2012.

Frog fever: TCU’s Gary Patterson owns the Longhorns, but No. 9 Texas must break the spell