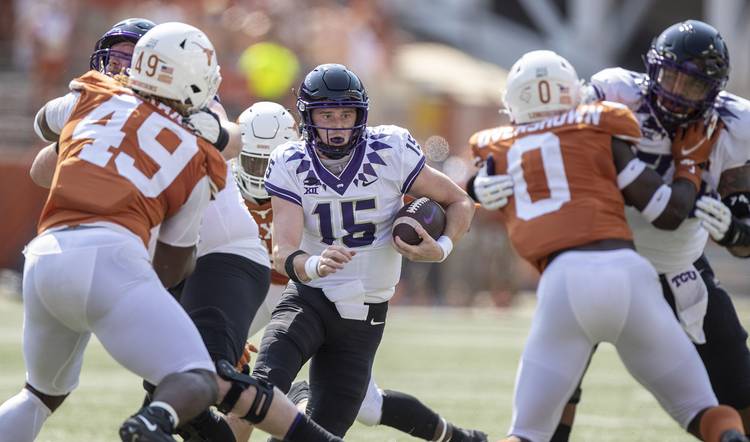 Revisiting our five pregame questions that were facing the Longhorns ahead of Saturday’s 33-31 loss to TCU.

1. Did Texas get to Max Duggan?

The Longhorns absolutely harried TCU’s sophomore quarterback, but while the five hurries were nice, there was only one sack — Joseph Ossai’s first of the season. Duggan took three big hits, but they were the wrong kind: Juwann Mitchell was ejected for targeting early in the second quarter on a big pop to the chin, Josh Thompson nearly sliced Duggan in half on a big hit to the midsection on a blitz, and Ossai was flagged for roughing the passer. Duggan ended up running it 17 times for a game-high 74 yards, and his 26-yard touchdown scamper right up the middle helped seal the game.

2. Did the TCU secondary cool off Joshua Moore?

Moore had been the star of the Texas receivers through the first two games, scoring on a 78-yard catch and run against UTEP and scoring three more times at Texas Tech. But he came up empty on Saturday. Sam Ehlinger targeted Moore three times, but Moore couldn’t come up with any of them. Slot receiver Jake Smith, making his season debut, hogged up nine targets.

3. Was there a five-star highlight from Robinson or Evans?

There were only three five-star running backs in the 2020 recruiting class, making Saturday’s meeting between Texas’ Bijan Robinson and TCU’s Zachary Evans an interesting subplot. Evans, who has been out about a month with COVID-19 issues, made his TCU debut and was generally forgettable: He had one carry for 3 yards and he had one catch for 6. That still was a better day than Robinson, though, who ended up not making the final stat sheet.

4. Did Texas bounce back on special teams?

Not that special teams were anywhere close to being the problem that they were in Lubbock, a rollercoaster ride that included a blocked punt, a muffed punt return recovered for a touchdown, a shanked punt and a Texas Tech onside kick recovery. But Saturday’s best special teams moment ended up not counting — Robinson’s big kick return. Cameron Dicker didn’t attempt a kick, though TCU’s Griffin Kell booted four field goals.

5. Did the higher-ranked team avoid the upset again?

That Texas, ranked No. 9 in the country, lost as a 12-point favorite shouldn’t have been that shocking. TCU owns the Longhorns as Big 12 programs, enjoying a 7-2 series edge since it joined the conference. And now the ranked team has lost in each of these teams’ last three meetings. Two years ago in Austin, Texas upset No. 17 TCU 31-16. Last year, it was TCU’s turn as the Frogs knocked off the 15th-ranked Longhorns 37-27.