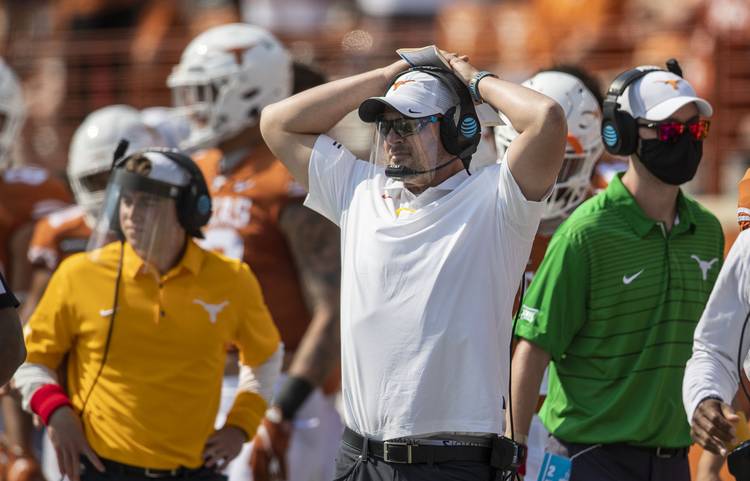 Texas, which looked so good with its two-minute offense in Lubbock, was unable to replicate that success on Saturday.

Given two possessions at the end of the first half of the 33-31 loss to TCU, the Longhorns actually fell into a deeper hole on the scoreboard. First, quarterback Sam Ehlinger threw a costly interception that the Horned Frogs flipped into a field goal for the 20-14 lead. Then Texas chose to run out the clock with almost a minute left.

HUGE play for @TCUFootball with the pick on Ehlinger! pic.twitter.com/4Rhk8k4HQQ

The interception came on a first-down play from Texas’ own 25 with 1:28 left. TCU had a “perfect blitz dialed up,” Ehlinger said, and safety Trevon Moehrig took away Cade Brewer’s slant route. So the quarterback instead looked for Joshua Moore, thinking the receiver would cut off his route. But Moore didn’t, and TCU cornerback La’Kendrick Van Zandt instead nabbed the ball. The Horned Frogs kicked a field goal.

“I shouldn’t have gone to Josh,” Ehlinger said. “I thought he was going to break it off quicker, but that’s on me.”

After the 32-yard field goal, Texas was once again set up on its 25. This time, 55 seconds remained. But with no timeouts left to use, Texas called for two run plays and ended the half.

“With (55 seconds) and no timeouts with that kind of field position, I thought it the best thing to do to go into halftime down six, one-score game, and regroup and come back out in the second half,” UT coach Tom Herman said.

In each of its first two games, Texas had scored on a last-minute drive. Against UTEP, the Longhorns marched 75 yards in 93 seconds and scored on an Ehlinger toss to Kai Money with six seconds remaining in the first half. In the comeback win over Tech, the overtime-forcing possession covered 42 yards in six plays. Ehlinger’s touchdown pass to Moore — and the ensuing two-point conversion — was recorded with 40 seconds left.

Sloppy start: The first quarter started and ended with a yellow flag on the ground. Those penalties were appropriate bookends for a 15-minute session that featured 13 infractions.

It actually took three attempts to get the game underway; TCU was twice flagged for offsides on the opening kickoff. Texas was also called for holding on the second kick, which cost the Longhorns a return by D’Shawn Jamison to the TCU 1.

The penalty that took away Jamison’s long return wasn’t the quarter’s only noteworthy flag. Facing a fourth-and-3 at the Texas 35, TCU instead had to punt after a delay of game. Meanwhile, Texas had a 47-yard catch by Keaontay Ingram (illegal player downfield) and Jake Smith’s 34-yard catch (offensive pass interference) nullified by penalties.

The 13 first-quarter penalties put Texas on a pace to break the Football Bowl Subdivision-level record for penalties in a game. But San Jose State and Fresno State’s 36-flag day from 1986 remained safe. The Longhorns and Horned Frogs ended their game with 26 penalties.

Snacks attack: Defensively, Texas was led by safety Caden Sterns’ 12 tackles. The Longhorns also got 11 from both Joseph Ossai and Keondre Coburn.

Those 11 tackles were a career-high for Coburn, a third-year defensive tackle. Two were for losses. Texas, however, had Coburn on the sideline for TCU quarterback Max Duggan’s game-winning 26-yard touchdown run in the fourth quarter and the seven plays on TCU’s time-killing drive at the end of the game.

Texas last had an interior lineman record double-digit tackles in 2014. During a 41-7 loss to BYU, Malcom Brown was credited with 10 stops.

Texcetera: Texas linebacker Juwan Mitchell was ejected in the first half for a targeting penalty. … After the game, Herman issued a lengthy injury report. Running back Roschon Johnson and linebacker Ayodele Adeoye were being evaluated for shoulder injuries, and both defensive lineman Reese Leitao and Moore were to have their knees looked at. Texas also ruled Tyler Owens out with a mid-game hamstring injury. … A 52-yard reception by Jared Wiley was the 10th-longest for a Texas tight end. The record for UT tight ends is William Harris’ 84-yarder against Penn State in 1984. … Ehlinger’s 36-yard run in the third quarter was a career-long for the senior quarterback.

TCU 33, Texas 31: Our five questions for the Longhorns — answered

TCU 33, No. 9 Texas 31: Another winnable game disappears as ‘this university deserves better’