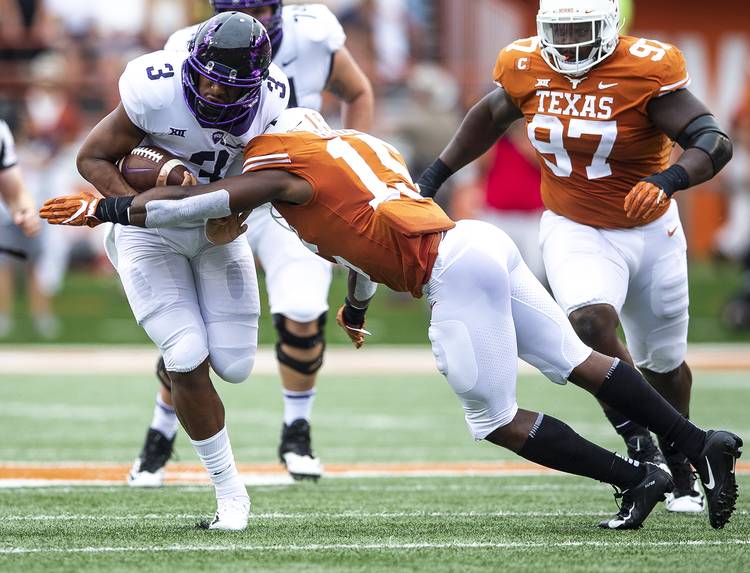 Five key matchups out of the Texas-TCU game to keep your eye on Saturday:

On its depth chart, TCU lists either Duggan or Matthew Downing as the starting quarterback. Duggan, though, was the better-performing quarterback against Iowa State last week. He also accounted for three touchdowns and was TCU’s leading rusher against Texas last year, and UT defensive coordinator Chris Ash said this week that the TCU sophomore is “the closest thing to a Sam Ehlinger in this league.” Ehlinger is a tough player to replicate. Through two games, he leads the nation with his 10 touchdown passes.

Texas coach Tom Herman was very complimentary of TCU safeties Trevon Moehrig and Ar’Darius Washington this week. On Monday, he said they are “two of the best, if not the best, duo in the country at safety.” Both Moerig and Washington intercepted Ehlinger in TCU’s 37-27 win last year. Texas also has a pair of talented safeties, though. Caden Sterns joined Moerig on the Big 12’s preseason team, and senior Chris Brown was responsible for one of UT’s three interceptions against Texas Tech last week.

Both Thompson, a 6-foot, 198-pound cornerback, and Johnston, TCU’s 6-4, 193-pound receiver, have already had noteworthy moments. In a blowout of UTEP on Sept. 12, Thompson recorded the first interception of Texas’ season. Last week Johnston’s 37-yard catch accounted for TCU’s first touchdown against Iowa State. A matchup between these two could have happened in a parallel universe as well. Before signing with Texas in 2017, Thompson was committed to TCU. And Johnston was once a member of UT’s 2020 recruiting class before he flipped to the Frogs.

Just a few years ago, Mathis was an All-Central Texas defensive lineman who compiled 16 sacks his senior season at Manor. Mathis redshirted in 2018, so this will be his first homecoming. He’ll return to the Austin area having started in TCU’s last 13 games. One of his two stops last week was behind the line of scrimmage. Mathis will likely draw a matchup with Christian Jones, a 6-6, 305-pound right tackle. Jones now has his first two career starts under his belt, but he was beaten for a sack last week.

Both teams have a kicker who can boot a long field goal. Last season Texas attempted to ice Kell with timeouts but he still nailed a 52-yard try. Dicker has booted two 50-yarders in his career, including a 57-yarder against Rice. So far this season, Dicker has made three of the four field goals he’s attempted, with a long kick of 43 yards in last week’s win at Texas Tech. Kell has missed his only attempt this season, a 49-yard try that was blocked in the Iowa State game.