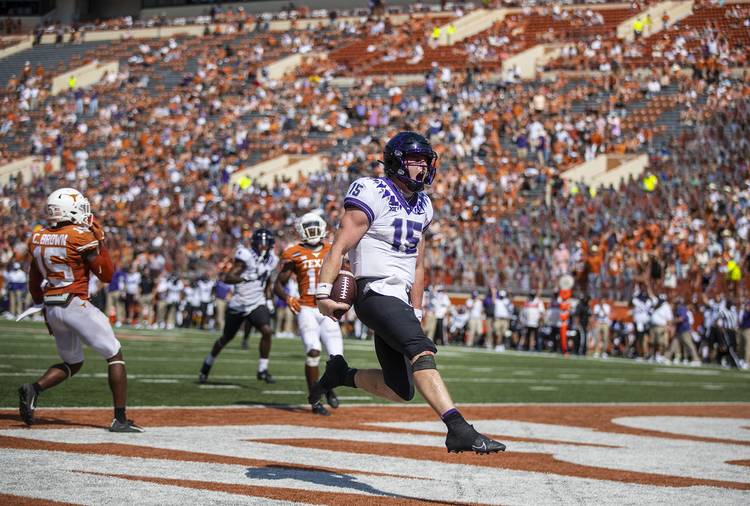 TCU quarterback Max Duggan (15) runs into the end zone during the fourth quarter of a 33-31 win over Texas in Austin on Oct. 3, 2020. [RICARDO B. BRAZZIELL/AMERICAN-STATESMAN]

There were 140 snaps taken in No. 9 Texas’ 33-31 loss to TCU on Saturday. Here are five that ended up making a big difference:

TCU scored first, but Texas forced a tie by the end of the first quarter. Facing a second down at the TCU 5, UT quarterback Sam Ehlinger found Jake Smith on a crossing pattern. Smith withstood a hit at the goal line to score.

A sophomore, Smith missed Texas’ first two games with an ailing hamstring. He caught six touchdowns last season. And with Devin Duvernay now in the NFL, Smith’s production in the slot was expected to increase.

In his 2020 debut, Smith finished with a team-high six catches and 49 yards.  He dropped a key pass on a third-down attempt in the third quarter, however.

Late in the second quarter, TCU held a 17-14 lead and Texas had the ball at its 25 with 1:28 left. The Longhorns were also three weeks removed from a half-ending drive against UTEP in which they covered 75 yards in 93 seconds.

Texas was not as successful this time. On first down, Ehlinger was intercepted by La’Kendrick Van Zandt on a pass that was intended for Joshua Moore. TCU was penalized on the return, but the turnover set the Horned Frogs up at Texas’ 20 and they eventually kicked a 32-yard field goal for the 20-14 halftime lead.

Texas was penalized 12 times for 92 yards. The Longhorns had a 96-yard kickoff return, a 47-yard catch and a 34-yard reception negated by penalties.

Arguably the most costly of UT’s infractions occurred in the third quarter. With Texas trailing 23-21, Ehlinger found Al’Vonte Woodard for a 26-yard gain to TCU’s 11.  The referees ruled, however, that right tackle Christian Jones had wandered a few extra yards on the play, and the sophomore was called for being an ineligible player downfield.

Instead of being at the TCU 11, Texas was pushed back to the Horned Frogs’ 42. The Longhorns punted two plays later.

With 9:56 left, Texas went up 29-26 on a 7-yard touchdown catch by Malcolm Epps. That was the first — and only — lead of the day for the Longhorns. But the Horned Frogs weren’t down for long. After the team exchanged fruitless possessions, TCU put together a five-play drive that was capped by quarterback Max Duggan’s 26-yard run into the end zone.

Said TCU coach Gary Patterson of the game-winning score: “They gave us a certain look and he checked to the draw and it was just a great check. He put it all on his shoulders. Him and the offensive coaches.”

Duggan finished with 231 passing yards and two touchdown runs. For the second straight year, Duggan was TCU’s leading rusher in an upset of Texas.

Duggan scored with 4:01 remaining, so Texas had a chance to respond. And the Longhorns quickly did. Using a 52-yard catch by Keaontay Ingram and then a 16-yard run by the running back, Texas moved to the TCU 1.

On the game’s decisive play, Texas kept the ball in Ingram’s hands. Ingram, however, fumbled while trying to stretch the ball across the goal line. TCU recovered with 2:32 left and ran out the clock.

Ehlinger had the option to keep it himself on the play, but he handed it off because of the look that TCU’s defense had given. After the game, UT coach Tom Herman said Ingram was UT’s best option at that moment. Roschon Johnson had earlier left with a shoulder injury, and freshman Bijan Robinson had been limited in practice during the week because of a strained back.

“Roschon was out, Bijan had one day of practice and we had called a tempo play,” Herman said. “We were good leaving him in.”

Yet again, Tom Herman’s Longhorns must get off the mat after sloppy, disjointing loss

The Dotted Line: Hayden Conner has never second-guessed his pledge to Texas