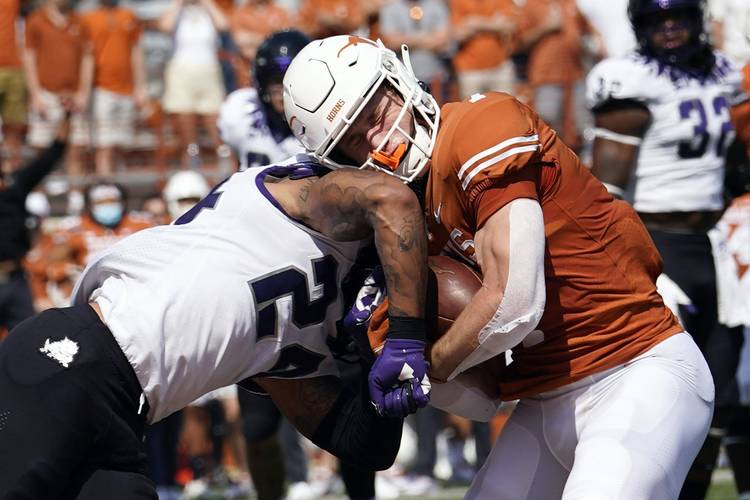 One week after barely surviving Texas Tech in overtime, ninth-ranked Texas slogged its way through a 12-penalty, 33-31 loss to TCU — the seventh loss to TCU in nine games since the Horned Frogs joined the Big 12.

TCU’s Max Duggan (20-30-231, 79 rush yards, 2 rush TDs) outplayed Sam Ehlinger (17-36-236, 4 TDs, 1 interception), who wasn’t sharp. Ehlinger did pass for four touchdowns, giving him 14 through three games, but a completion percentage below 50% simply won’t cut it in the Big 12. Points are required. Ehlinger knows that. He wasn’t awful, but it certainly was far from his best game. He added 49 rushing yards.

Keaontay Ingram’s fumble at the goal line late in the game will be the most remembered play from this loss. But he also set up the Longhorns for what would have been that go-ahead score with a big catch and run. The junior had a team-high 11 carries but finished with only 40 yards, an average of 3.6 yards per carry. He did finish second on the team with 53 receiving yards, but 52 of them came on that one play right before the fumble. Texas’ game plan didn’t lean on running the ball. Despite it being a tight game for most of the game, Ingram and Roschon Johnson were tasked with only 19 total carries. Johnson had five runs for 63 yards and also caught a touchdown pass. Texas didn’t have a rushing score.

TCU’s secondary absolutely owned Texas receivers throughout the game. Jake Smith was the lone Longhorns receiver to record more than a single catch. He dropped a critical third down pass in the fourth quarter, but did finish with a team-high six catches and Texas’ first touchdown. Those six receptions went for only 49 yards, though. The rest of the receivers were quiet as Ehlinger was forced to look for his running backs and tight ends. After two solid games, Joshua Moore didn’t record a catch. Brennan Eagles couldn’t get loose outside of his one catch, a 45-yard score. It was a forgettable day for the rest of the group.

The tight ends were Texas’ lone offensive bright spot. Jared Wiley led the team with 63 receiving yards and made three important plays — the big 52-yard catch that set up the first score, a third-and-10 catch for 11 yards to keep a fourth quarter drive alive, and springing Roschon Johnson’s 40-yard run in the fourth quarter with a block at the line. He lined up in the traditional tight end’s spot but also as a wide receiver and in the backfield as a second running back or a fullback. He’s becoming Texas’ preferred option at the position. Malcolm Epps caught a touchdown; Cade Brewer finished with one catch for 1 yard.

The line played better in the loss to TCU than it did in the win over Texas Tech. Ehlinger attempted 36 passes and wasn’t sacked once. The running game averaged 6.3 yards per carry. The Longhorns’ front was in no way dominant, but it played well enough for Texas to win the game. Christian Jones is only a sophomore but is beginning to alleviate the concerns about right tackle, though he did get flagged for a key penalty in the fourth quarter that took away a 26-yard pass to Al’vonte Woodard down to TCU’s 11. The Horns, trailing 23-21, ended up having to punt on a drive that had started at the Frogs’ 36. Texas’ tackles look fine. It’s the guard positions that remain the trouble spots up front.

The Horned Frogs rushed for 226 yards but needed 50 runs to get there, an average of 4.5 yards. Outside of a few key runs from Duggan, the Longhorns fared well against the run. Joseph Ossai applied consistent pressure, forcing a fumble and getting his first sack of the season. He and Keondre Coburn each had 11 tackles. T’Vondre Sweat finished with five.

Season stats: Ossai leads the team with 22 tackles; he also has a sack, a forced fumble, two quarterback hurries and two pass breakups

Texas isn’t as talented at linebacker as it needs to be in order to field anything more than an average defense. The group became even less talented in the first half when starting linebacker Juwan Mitchell was ejected from the game for a targeting penalty. That was early in the second quarter and it forced Texas to play Cort Jaquess and Ayodele Adeoye more than planned. Adeyoe (3 tackles) eventually left the game with an injury. DeMarvion Overshown (7 tackles, 1 hurry, 1 breakup) continues to show flashes; this was his third game since spinning down from safety.

Season stats: Overshown is fifth on the team in tackles but leads Texas with 3 pass breakups

Tackling and overall effort were an improvement from the defensive backs’ subpar performance the week before in Lubbock. Duggan did most of his passing damage with underneath routes save for two throws that went for more than 30 yards. TCU running backs accounted for 25% of the team’s receptions, and slot receiver Taye Barber had seven. The Longhorns didn’t give up a passing touchdown. Caden Sterns led the team with 13 tackles and the defense forced four field goals to keep the game within reach in the second half.

TCU 33, No. 9 Texas 31: Another winnable game disappears as ‘this university deserves better’

Yet again, Tom Herman’s Longhorns must get off the mat after sloppy, disjointing loss