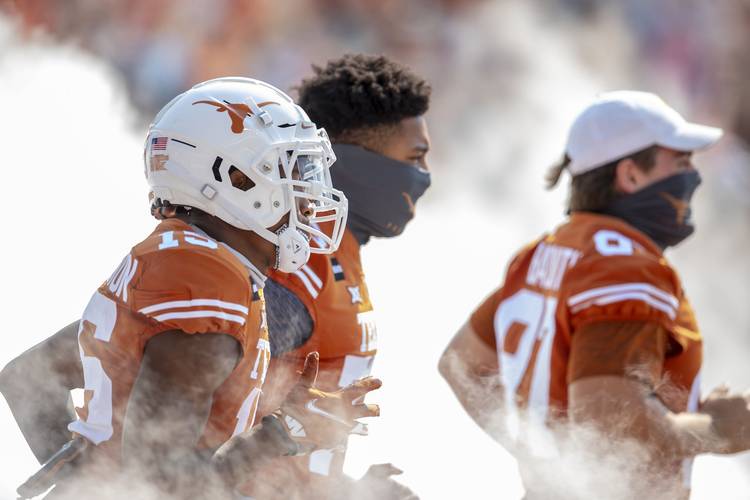 Texas players take the field against TCU on Saturday at Royal-Memorial Stadium. The Longhorns lost 33-31. (Ricardo B. Brazziell/USA Today)

Every time Texas puts itself in position to take another step forward, Tom Herman’s program gets punched square in the face. How many times will the Longhorns accept being knocked down?

The Horns went 10-4 in 2018, and Herman got a guaranteed contract extension through 2023. Then came third-and-17 against LSU the following season.

Herman’s charges got off the mat only to get stomped by Oklahoma. “Obviously we’ve got to tackle better,” Herman said last October at the Cotton Bowl. Texas regrouped only to get outplayed in losses at Iowa State and Baylor. Then came an inspirational win over No. 11 Utah in the Alamo Bowl to finish the season 8-5.

On Saturday, Herman’s Horns were back on the canvas, having absorbed a 33-31 roundhouse from unranked TCU. It begs the question: Just how many four- and five-star recruits does it take to beat the Horned Frogs? At UT, Herman is now 1-3 against his counterpart, TCU’s Gary Patterson.

Texas (2-1, 1-1 Big 12) fell to 22nd in this week’s Associated Press Top 25 poll. The legitimacy of Herman’s program is now under the microscope going into a pivotal matchup this week against now-unranked Oklahoma (1-2, 0-2).

The Sooners may have lost two straight Big 12 games for the first time since 1999. But it’s still the Red River rivalry, and for now, OU is still the five-time defending league champs.

In this unpredictable year, a two- or even three-loss team is likely to make the Big 12 championship game. So the Horns can still reach their goals. One loss doesn’t ruin that.

But the latest loss to TCU will force Texas fans to step back and reassess the big picture. Is this program moving forward or not?

“They made more plays, obviously, than we did,” Herman said. “Really sloppy game in all phases, but we had a chance to win at the end and couldn’t do it.

Herman said “that’s on me to get them ready” and make sure the Horns don’t beat themselves with mistakes.

“They were hurt in the locker room,” he added. “But I heard a bunch of guys picking each other up, understanding that we’ve got a long season and the only way to fix it is with hard work and going back to practice with a purpose.”

In four seasons, Herman is 27-16 at Texas. Back of the envelope math shows UT would owe him and the new assistants north of $25 million to make a change now, so that idea is a non-starter. Nobody within UT administrative circles truly want to change coaches. It’s nothing but angry message-board fodder.

Herman revamped most of his staff during the offseason. He changed the defensive front and retooled the offensive staff. The Horns rank eighth in the Big 12 in scoring defense after two league games (44.5) even though the offense ranks first (47.0).

TCU did nothing glamorous or outside the box. Quarterback Max Duggan completed 20 of 30 passes for 231 yards and no touchdowns. On most weeks, that’s not winning football in this league.

But he had a critical 26-yard touchdown run into an open area where UT defenders vacated. The Frogs also had 226 rushing yards on 50 attempts, running straight into UT’s defense at times.

Texas got 63 rushing yards from Roschon Johnson and 40 more from Keaontay Ingram. But 36 yards of Ehlinger’s 49 total came on one run. This team simply isn’t running the football well enough through three games.

“They do a bunch of different things,” center Derek Kerstetter said. “A lot of twists and a lot of different movements up front. We’ve just got to do a better job. And that’s on me, and we’ll get it fixed.”

Granted, it was one loss, and overreaction Monday is practically trademarked at Texas.

But everyone inside Moncrief should think about how things look to fans and donors. All they see is a program that’s losing games it shouldn’t while doing away a cherished, decades-old tradition in the process by avoiding “The Eyes of Texas.”

Quarterback Sam Ehlinger struck the right tone by telling Ingram “as much as we love this, it is just a game” after the running back’s goal-line fumble. The season ticket holders, some of whom spend thousands in tickets, hotels and tailgating each year, might feel differently.

Yes, Saturday was one loss. But more will come if the Horns can’t figure out how to play sound, disciplined football in the weeks to come. Once again, this program has to get off the mat.

Really, it’s simple. Do Herman and these Longhorns want to win a Big 12 championship and compete for the College Football Playoff or not?

Texas report card: As expected, the grades out of the 33-31 loss to TCU aren’t good