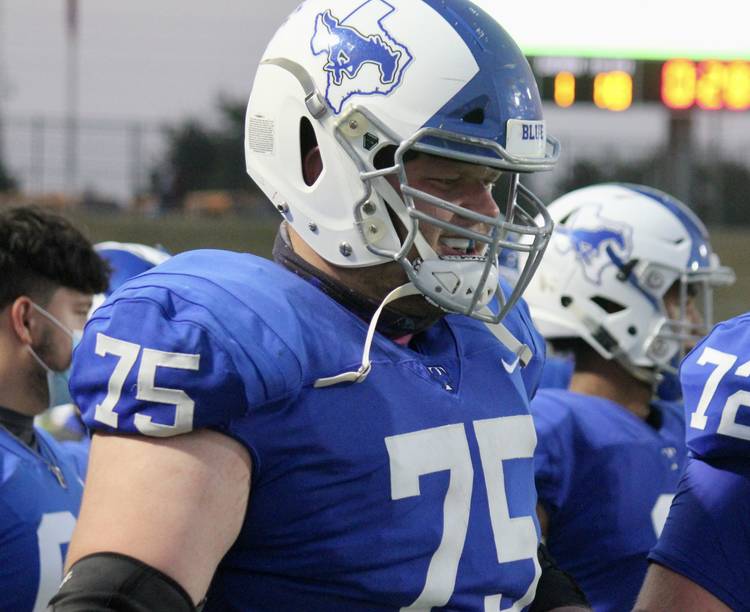 Texas commit Hayden Conner committed to the Longhorns in July of 2019. (Mike Craven)

KATY — Hayden Conner is Texas’ longest standing commitment in the 2021 class. The Katy Taylor offensive tackle has watched UT switch offensive coordinators and lose pledges like Jalen Milroe, but the big man has never wavered since he committed in July 2019. The 6-5, 317-pound prospect is the lone four-star offensive lineman pledged to the Longhorns.

“There was never a second thought,” Conner said about his commitment. “It was the relationships I built with the coaches, as well as how much I love the city of Austin. When I commit to something, I’m going to do it.”

The early decision was a blessing in disguise. The pandemic has prevented his 2021 peers both from visiting campuses and visiting with coaches in-person. Conner was at UT for junior day late in February with Taylor teammate Bryce Foster. It’s the last time Conner visited a campus.

“Our lives revolve around this stuff, so it was weird being away from it, but it is unbelievable to be back playing with my guys,” Conner said after Taylor’s win over George Ranch. “It is the best sport. We go from a season to spring prep to spring practice and then into summer workouts and then into the season. That’s our life.”

Like many players around the state, Conner kept in touch with his teammates by organizing their own activities away from the coaches and oversight of the UIL.

“Some of us worked out together, and then we’d meet up at the field to work out by ourselves without the coaches,” Conner said. “We also did online workouts that our coaches led.”

The return to football was a return to normalcy for football teams in Texas. For Conner, it was the start of his fourth season on varsity after debuting as a freshman. His game has improved as he’s matured.

“I’ve improved my leadership aspect. I didn’t have much of a voice as a freshman or sophomore on varsity,” Conner said. “ I was the young pup and didn’t want to be the annoying freshman. I’ve become more vocal as I’ve gotten older.”

He’s happy to enjoy his final year on the prep stage before beginning his college career in January. Conner will enroll early at Texas.

“I get to go out here, play my heart out and then I get to go home and get ready for college,” he said. “No stress.”

Conner is ranked No. 38 on the Fabulous 55. He’s the 25th-rated tackle prospect in the country and a national top-325 recruit. Texas’ class consists of 18 members, including three offensive linemen. It ranks 15th in the nation and second in the Big 12, trailing Oklahoma. The Sooners and Longhorns meet Saturday. The two rivals are in a recruiting battle for Foster, one of the state’s premier interior offensive linemen, along with Oregon and Texas A&M.

Texas’ Tom Herman refusing to panic, still sees ‘a ton of improvement from week to week’