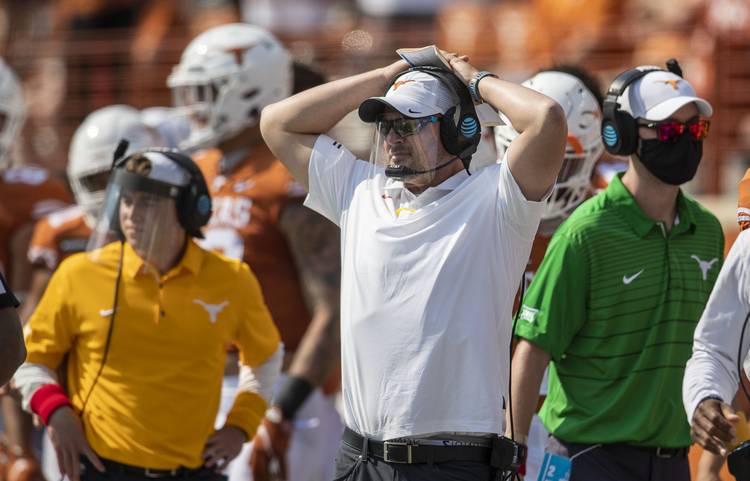 Texas coach Tom Herman braces for impact after every loss and even the close wins, too. Probably smart.

“Well, I haven’t gotten on anything other than Yahoo News,” Herman said Monday. “So I know a lot more about our president’s health condition and some of the celebrity gossip than I do about our fans’ reaction to us.”

For Texas fans, some Remdesivir and a skim through Page Six won’t be a good cure-all. The 22nd-ranked Horns have now struggled against two double-digit underdogs, and now they’re 2.5-point underdogs themselves. Unranked Oklahoma, even after back-to-back Big 12 losses, is the favorite Saturday at the Cotton Bowl.

Herman is upright and upbeat, but metaphorically speaking, his team is nowhere near ready to leave Walter Reed medical center just yet. Maybe he’s not exactly ready, either. “This is still OU-Texas and always will be,” he said.

“In 2020, nobody in this building is going to panic after a Week 3, two-point loss at home,” Herman said. “Now that’s not saying we are burying our head in the sand to the tremendous amount of issues that we have to correct.”

“We kind of knew that defensively, when you install a new package like this, that that there were going to be some growing pains,” Herman said. “It’s our job as coaches to expedite that process as quickly as we can.”

Herman said those two games “definitely told us a lot that we didn’t know. We played how we should have played against UTEP, and then these last two weeks happened.”

Herman leaves out the part how the 2018 team was 6-1 before losing to Oklahoma State and West Virginia . That team needed a miraculous touchdown catch by Lil’Jordan Humphrey to escape Texas Tech, the “Don’t Stop Believin’” win over Iowa State and a victory on a chilly day in Lawrence, Kan. Even then, Herman said that team was overachieving.

This current bunch enters the Cotton Bowl with a slew of new injuries. Linebacker Ayodele Adeoye will need shoulder surgery while defensive back Tyler Owens (hamstring) and defensive end Reese Leitao (knee) are doubtful. On offense, running back Roschon Johnson has a sprained shoulder and Joshua Moore, UT’s leading receiver, has a deep bone bruise.

At least the Horns expect to get slot receiver Jordan Whittington (torn meniscus) back this week. Whittington would pair nicely with fellow receiver Jake Smith, who had six catches for 49 yards against TCU.

Herman said “I know I’m prone to hyperbole” but the Longhorns had what the coach called an “unbelievable Sunday” practice. “When I got home late last night, I told my wife the same thing,” he said.

The players are holding themselves accountable for what happened against TCU. It’s hard to know what that means until the players greet reporters on Tuesday, though.

Still, anyone wearing burnt orange must know they let a sure-fire win slip away, along with it the chance to go 3-0.

“Texas is struggling?” TCU coach Gary Patterson said on Monday’s Big 12 coaches teleconference. “They were No. 9 coming into our game and were a fumble away from being 3-0. I wouldn’t count them out just yet.”

This will be the most unique Texas-OU game in recent memory, maybe even the most awkward of all time. The Cotton Bowl will not be full, due to COVID-19 restrictions. Both sides received 12,500 tickets, and neither teams’ band will be in attendance. All fans are expected to wear masks and practice social distancing.

The State Fair of Texas has been called off, although there will be several Fletcher’s corny dog stands set up along with a mini-Midway. Parking should be a breeze for once.

Whether the Horns win or lose, Texas fans stay in the Cotton Bowl’s north end zone to sing “The Eyes of Texas.” After wins, it’s deafening. After losses, it’s meant to heal the burnt orange soul. The first two home games, UT players have jogged off the field and did not acknowledge the fans’ post-game singing. That’s likely to continue in Dallas and throughout this season.

Asked about his players ending a decades-old tradition, Herman said, “I don’t think it’s ended. I know that our administration has given them the freedom to not mandate that they sing that song. Those guys have chosen to do so. But I don’t feel like it’s ended by any stretch of the imagination.”

Herman avoided a follow-up question. Told the tradition was the players staying on the field for the singing, Herman paused and said, “Right.” The entire exchange at the end of his press conference was omitted from the video posted on the UT athletics website.

Herman’s got other fires raging at the moment.

“I know our players are eager to roll up their sleeves, get back to work and make sure that we improve the things that we know we can, that are fixable and hopefully have that translate better on Saturday,” Herman said.

The Dotted Line: Hayden Conner has never second-guessed his pledge to Texas