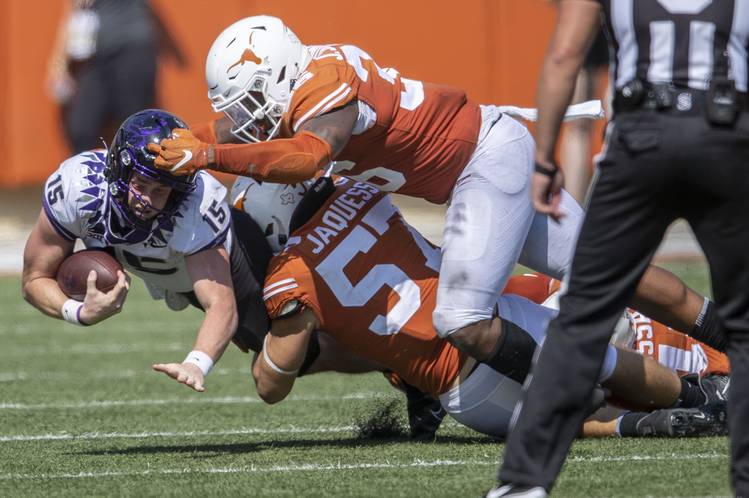 TCU quarterback Max Duggan (15) fights for yardage as Texas defenders Jacoby Jones (36) and Cort Jaquess (57) team up for a tackle on Oct 3, 2020 in Austin. [RICARDO B. BRAZZIELL/AMERICAN-STATESMAN]

Over the years, there have been a couple of ways to describe Cort Jaquess, Texas’ junior linebacker.

That last one deserves an explanation. Jaquess walked on in 2017 and found a home on the Longhorns’ scout team with the self-described meat shields.

“You kind of take all of the beating from the scholarship guys and the starters when you’re on the scout team and you’re a walk-on,” Jacquess said. That’s why scout team safeties occasionally moonlight as tackling drill ball-carriers. Jaquess himself was used as an undersized defensive lineman when needed.

These days, Texas isn’t using him on the scout team. In fact, he has started twice in the last four games, going back to the Alamo Bowl. Jaquess insists, though, that he’s still a meat shield at heart.

Jaquess has been a full-time starter before. But that was in high school, when he was his district’s defensive MVP at San Antonio Churchill. He was recruited by Division II and Division III programs. He considered Texas A&M-Commerce, but an offer to become a preferred walk-on at Texas eventually came. He was going to have to pay his own way, but at least he’d still be a Longhorn.

“It’s always a dream that I had, and you’ve got to chase your dreams,” he said.

Jaquess’ father, Jay, was a UT defensive lineman from 1986-88. One of Cort’s all-time favorite Christmas gifts was a football signed by both Colt McCoy and Jordan Shipley. He also still vividly remembers receiving a high-five from McCoy at an Orange-White spring game.

“I don’t think I washed my hand for three months,” he joked.

Life on the scout team isn’t easy. Defensive players like Jaquess, after all, are essentially doing what the offensive coaches instruct. Chances to work on technique and fundamentals on that lower tier still exist, though, and Jaquess thought the reps he got against a first-string offense were valuable.

On Tuesday, defensive lineman Keondre Coburn recalled that Jaquess was the scout team captain in 2018, Coburn’s redshirt season. “Players would just complain about how (Jaquess was) doing too much, he’s working too hard,” he said.

Jaquess admittedly thought about leaving the program following the 2017 in which he didn’t play. He stuck it out and began to appear on special teams that next year. In the summer of 2019, Texas surprised him by awarding him a scholarship. He was later named a starter for the 38-10 bowl win over Utah.

“Oh, yeah, Cort’s a great story,” Texas coach Tom Herman said last year. “You know, if there was a scout team player of the year award, he would have won it probably back-to-back years. He’s really tough, really physical and just understands football.”

This spring Jaquess went viral for a photo of a homemade gym that he and his brother created out of concrete and other materials from Home Depot. And while that photo has been liked more than 1,200 times on Twitter, it’s Jaquess’ on-field play that is now getting noticed.

He has appeared in each of UT’s last 25 games. That’s the 10th-longest streak on the team. He has started twice during that span. In last week’s 33-31 loss to TCU, he recorded a career-high seven tackles. Of those, 1.5 were for a loss.

“This dude’s really a good player, he works very hard,” Coburn said. “It’s hard being a college football player, so the fact that it’s paying off for him, it’s amazing.”

In three career games against Oklahoma, Jay Jaquess totaled seven tackles and a pass breakup. Cort also faced the Sooners three times, but only on special teams during their annual game at the Cotton Bowl and in the 2018 Big 12 championship game. His role this time will be bigger.

“So many legends were made on each side for UT and for Oklahoma throughout (the Red River Showdowns),” Jaquess said. “It’s just a dream come true to be able to play in that game and represent all that tradition that past Longhorn generations have built up.”

The Dotted Line: Nine prospects from the 2021 Fabulous 55 remain uncommitted