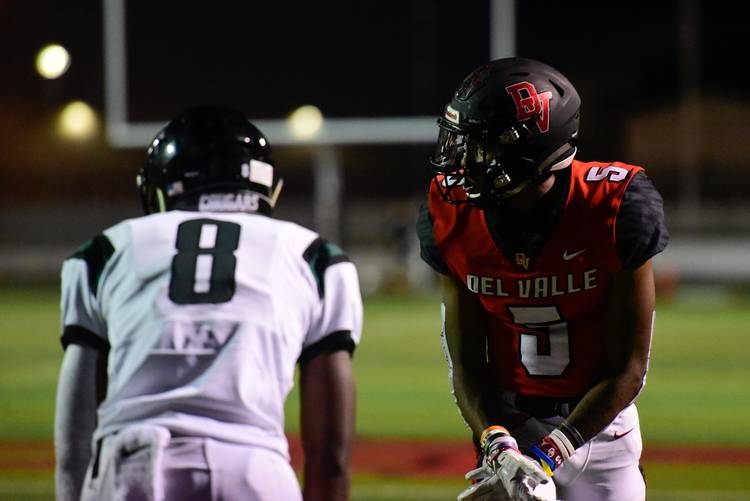 Del Valle receiver Caleb Burton (#5) lines up against Connally defensive back Jahdae Barron on Sept. 6, 2019. Burton is one of the top receivers in the 2022 recruiting class. [Statesman)

La Porte defensive tackle Albert Regis has scheduled his college announcement for noon Saturday. The three-star prospect in the 2021 recruiting cycle is considering Texas, Arkansas, Houston and Texas A&M. He has received 17 offers. Regis is a 6-1, 300-pound run-stuffer ranked as the 26th-best defensive tackle prospect in the country, according to 247Sports’ composite ratings.

Texas hasn’t received a commitment from a defensive tackle. The Longhorns signed a pair of three-techniques in Alfred Collins and Vernon Broughton in 2020. Regis is a nose tackle in the mold of Keondre Coburn. He’s athletic, which is illustrated by his time playing tight end at the prep level. He was a first-team all-district selection as a junior tight end and the District 21-6A sophomore of the year in 2018 as a two-way player.

Regis is one of four defensive tackle prospects to hold a UT offer. Texas hopes to gain a commitment from Regis to stash him behind Coburn and T’Vondre Sweat. The Longhorns will be done at the position if he commits; defensive line coach Oscar Giles would then shift his focus to four-star DeSoto defensive end Shemar Turner.

Regis and his La Porte teammates host Port Arthur Memorial on Thursday night. Memorial features a pair of Texas commits in 2021 defensive end Jordon Thomas and 2022 cornerback Jaylon Guilbeaux. Follow my updates from the game on Twitter at @CravenMike.

Austin was home to a five-star wide receiver in 2019 in Lake Travis’ Garrett Gilbert. The city’s next five-star receiver is Del Valle’s Caleb Burton. He suffered a setback early in the season with a season-ending knee injury, so he has shifted focus to the recruiting trail as he rehabilitates from the injury.

Texas made his initial cut from 38 offers to 12 finalists. The 6-0, 165-Burton is the nation’s No. 10-ranked overall recruit in the 2022 cycle, taking home the honors as the top-rated player at his position in the entire country. Burton was a second-team all-district selection as a sophomore and a first-team all-district selection as a junior. His dad, Charles, is the head coach at Del Valle. Caleb entered his junior year with 83 career catches for 1,491 yards and 18 touchdowns.

The Longhorns hold commitments from three prospects for 2022, including five-star quarterback Quinn Ewers. Texas hopes the early pledge from Ewers — the nation’s top-rated signal-caller for 2022 — helps lure players like Burton to follow suit. Texas’ 2021 class is poised to be the first to finish outside of the top 10 of the national rankings since Tom Herman inherited the 2017 class two months away from national signing day.

The 2022 cycle is loaded with highly-rated in-state receivers. The Longhorns already hold a commitment from four-star Phaizon Wilson out of Lancaster.  Other names to know at the position are Evan Stewart and Armani Winfield. Texas has offered more wide receivers (19) than any other position group so far in 2022, signaling an intention to load up at the position. Out-of-state three-stars Alexis Alexis and Casey Cain are the only receivers pledged to the Longhorns for 2021.

The Statesman Interview: Will Matthews on mental health, protests and the Longhorns’ backfield