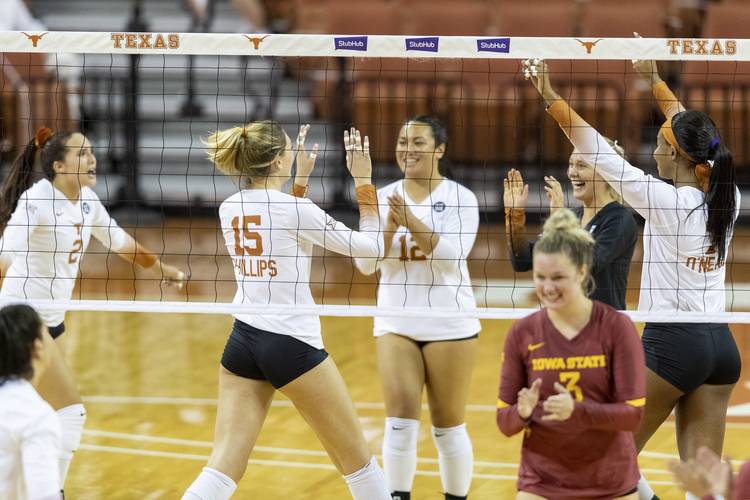 On the Texas campus, Thursday night was not one for the history books.

Logan Eggleston’s 14 kills paced Texas in a 25-19, 25-22, 25-14 win over Iowa State at the Erwin Center. Iowa State was looking for its first-ever win in Austin. The Longhorns instead ran their home record against the Cyclones to 27-0.

Advertisement
“I think that it’s really important for us to just play our game against teams that we think we should come out with a win,” sophomore Molly Phillips said. “It’s really important to be consistent and play every point like its national championship point.”

Like last week, Texas was playing as the No. 1 team in the AVCA’s fall poll. And as top-ranked programs are wont to do, Texas controlled the scoreboard on Thursday night. The Longhorns never trailed during the opening set. The following session, Iowa State only led at the 1-0 mark. In both sets, however, the Cyclones kept the Longhorns from pulling away.

Aided by two Asjia O’Neal blocks, Texas closed out the first set with a 5-1 run. The Longhorns fended off Iowa State in the second set with back-to-back kills by Skylar Fields.

“I always tell my team that this is the most blue collar team that we play in our conference,” Texas coach Jerritt Elliott said of Iowa State. “We knew that coming in, so you’ve got to finish from start to finish against this team. I thought (we) played extremely well in the first two games.”

Texas led by as many as 11 points in the third game. The Longhorns hit .370 over the final race to 25 points, and the match ended on a kill by Brionne Butler. Thursday’s sweep was UT’s fourth this season. Texas has only dropped one set, a 29-27 decision at Oklahoma on Sept. 25.

The lone player to win the Big 12’s offensive player of the week award this fall, Eggleston led UT in kills for the fifth time. Butler added nine kills on Thursday. UT also got eight kills apiece from Fields and Phillips.

Phillips did her damage on just 11 swings. As a freshman in 2019, the 6-5 Phillips got most of her reps as a middle blocker. But with Texas short on attackers this season, she was moved to opposite hitter.

Texas tinkered with shifting either Phillips or Butler to the right side. Elliott, though, liked Phillips’ consistency and also argued that Butler needed to remain in the middle since she is “one of the best blockers in the country.” Phillips, who had some previous experience at her new position through the club circuit, said the biggest adjustment has been the timing on sets. In five matches, Phillips is averaging 2.38 kills per set. She is hitting .373.

“Coming into the season, I was just ready to play wherever they asked. Like where do you want to play, I really don’t care, just on the court would be the best position,” Phillips. “It’s been really fun to do something different, see the court in a different way.”

Iowa State (2-3) was led by Brooke Andersen’s nine kills. The Longhorns and Cyclones will close out their two-match series at the Erwin Center on Friday night.

NOTES: Following the match, UT’s players stood in a line and put their Horns up during the postgame playing of “The Eyes of Texas.” The Longhorns wore face masks and did not appear to be singing along. After last week’s matches against Kansas, the athletes huddled together and did not acknowledge the song. … Citing HIPAA rules, Elliott declined to elaborate on why freshman setter Naomi Cabello has not played this season. Elliott is hopeful that Cabello will be available in a couple of weeks. … Jhenna Gabriel had 37 assists for Texas.