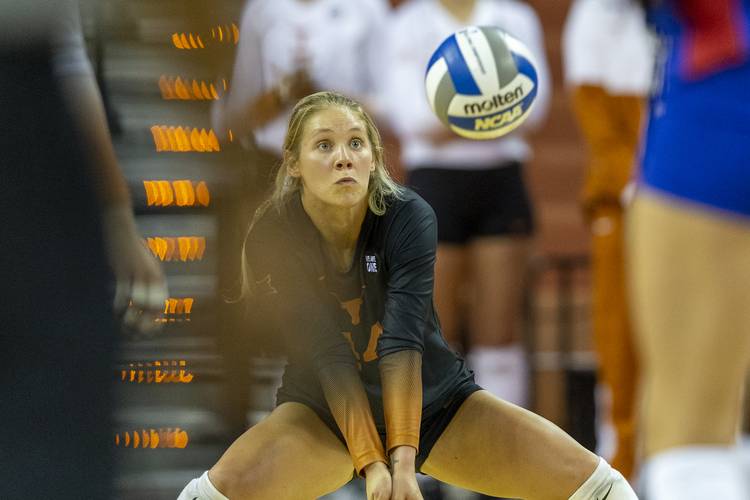 Morgan O’Brien figured that she was content. She certainly was busy. O’Brien had a new puppy, a rescue pit hound named Luna. She had her graduate school classes. She taught a little volleyball.

The the Longhorns came calling. Texas coach Jerritt Elliott could use another libero this season, and O’Brien had been a good one at Illinois before graduating in three years and enrolling at Texas.

Elliott said that he “heard through the grapevine” that O’Brien was in Austin.

“It feels like she’s been here the whole time I’ve been here,” said junior Logan Eggleston, who led Texas with 16 kills using superb .417 hitting accuracy. “The passing’s been so easy. The communication’s been so easy.”

O’Brien is glad she returned to volleyball.

“I honestly hadn’t given it much thought,” O’Brien said. “I had just got a puppy, but I did miss it.”

Elliott said O’Brien brings calmness and steadiness that helps the Longhorns. Maybe that’s one reason that every time Iowa State (2-4) made a move, the Longhorns stood strong, pushed back, took control again.

The end result was another sweep for the Longhorns, who have won 13 straight sets, losing just one in six matches.

Texas, which began the match hitting an impressive .343 for the season, finished with .337 on Friday. How good is that? The Longhorns led the nation in hitting last season with .325.

Iowa State, trailing 17-11 in the first set, rallied as Eleanor Holthaus produced two kills and a service ace to pull the Cyclones even at 22-all. The Longhorns merely shrugged.

Brionne Butler responded with a kill up the middle, Asjia O’Neal and Molly Phillips combined for a block, and Phillps finished the set by hammering a ball cross-court.

The second set was conducted similarly. Iowa State fell behind 19-13 but trailed only 23-22 after a kill by Candelaria Herrera and an ace from Annie Hatch. No big deal for Texas, though. Phillips slammed another big kill, and a hitting error by Iowa State handed Texas the final point.

Texas hit .387 in the third set, its best effort of the match. Eggleston, a second-team All-American last season, made the final two Texas kills of the match.

“When Iowa State was coming back, we did a good job pushing through those points, not giving up any more, and ending the game,” O’Brien said.

Notes: Jhenna Gabriel handed out 37 assists for Texas and matched O’Brien’s 10 digs. … O’Neal led the Longhorns with five blocks. … The Longhorns are at Kansas State next Friday and Saturday.

Texas-Oklahoma meet again in Dallas, but where are these programs truly headed?