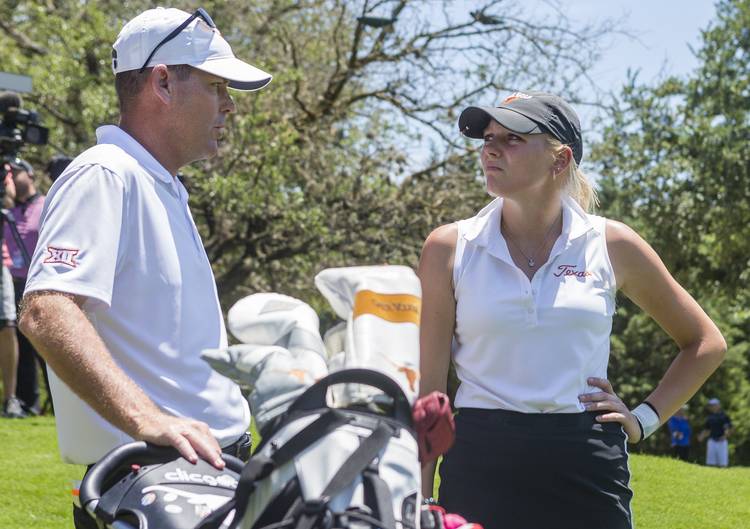 Kaitlyn Papp remembers seeing a young Bentley Cotton taking swings at the Austin Country Club when she was about nine years old.

In the decade since, Papp’s and Cotton’s paths diverged in the 12 miles between Lake Travis and Westlake — two high schools often mentioned in the same breath, but not without their long-standing athletics rivalry. This year, however, the two hometown athletes have grown accustomed to wearing burnt orange together on the green.

Within his first few years as head of the UT women’s golf program, Ryan Murphy convinced Lake Travis’ Papp, Westlake’s Cotton and Macy Fox, another Lake Travis product, to leave the hills of West Austin for UT. The local trio makes up nearly a third of Murphy’s team this fall.

“Here in Texas there’s always great players coming up,” Murphy said, “and locally here in Central Texas it seems like there’s always one or two or three great ones that are coming up as well and we’re always keeping an eye on them.”

When Murphy was tapped to lead Texas in 2014, the program ranked “probably 50th in the country,” he said. During his first season, the Longhorns finished sixth in the Big 12 championship.

Around that time, Murphy began recruiting Papp, who was just 15 years old and among the top tier of golfers in her class nationally.

Now able to reflect on his program’s upward trajectory since that first year, Murphy credits Papp’s signing as a significant moment in Texas’ rise. She’s now a senior for the Longhorns.

“That turned our program around, that verbal commitment,” Murphy said, “She was still two years away from arriving on campus, but the significance of that commitment created a bit of a domino effect in our recruiting.”

Two seasons ago, Texas finished its campaign as one of the top five teams at the NCAA championship, a mark it hadn’t reached since 2003. The Longhorns were ranked No. 1 in the country for a majority of this spring before the season was canceled. Murphy added to the roster this offseason with Cotton and Fox, a pair of freshmen newcomers who became close in their early years and grew up together during their respective high school chapters.

Make no mistake, though. Cotton wished to outshine Fox’s school in each competition.

“It’s kind of like OU and Texas in every sport, really,” Cotton said. “Every time we played them in any sport, we wanted to beat them. It just really didn’t matter whether it was on a golf course or volleyball or basketball.”

One of the two programs has won the Class 6A state title in girls golf every year since 2015. The Cavaliers won while Fox was a freshman (and Papp, a senior). Cotton’s Chaparrals earned state honors the next two seasons.

Papp was one of five members from Lake Travis’ 2016 championship team who eventually signed to play golf for Division I schools.

On the other side of the fence, Cotton graduated with Sadie Englemann, a freshman at Stanford who was previously named the American-Statesman’s 2019 Central Texas girls athlete of the year in golf.

Cotton said the program at Westlake “really helped develop me into the player I am today.”

So, what factored into Cotton’s and Papp’s decisions to stay in Austin for college?

“I like to call it my team — my swing coach, my family, everybody is in Austin,” Cotton said. “I didn’t have to leave them. That definitely helps keep my anxiety down and keep my stress level pretty low because they’re always there for me, always watching out for me.”

Papp, meanwhile, didn’t have a preference to remain in Austin. Her dad served in the Navy for 20 years and she grew keen in adapting to new environments as a kid. Papp was born in North Carolina, moved to Florida (twice), moved to North Carolina again and then lived in Japan for four years all before completing middle school.

“When I was being recruited,” Papp said, “I didn’t have a really strong desire to be really close to home or really far away, but now looking back I realized being within a few hours of your family, I think that’s a great thing to have.”

Papp and Cotton will compete for the Longhorns this weekend, beginning Saturday, at the Betsy Rawls Invitational, Texas’ annual tournament named after the renowned golfer who played at UT in the late 1940s.

She has already cemented her name with the likes of Rawls, at least in Longhorns lore. Cotton and Fox have the opportunity to do the same, and it’s important to Papp that she uses her position to assist them, along with others.

“Hopefully underclassmen will keep an eye on how we practice and how we play and what it takes to be ranked No. 1, No. 2, No. 3 in the country,” Papp said.

“Leading by example is a great way to show these girls how the program has been and where they can continue to take it.”

Texas’ notable number: Oklahoma’s top receiver against the Longhorns — and the number 39