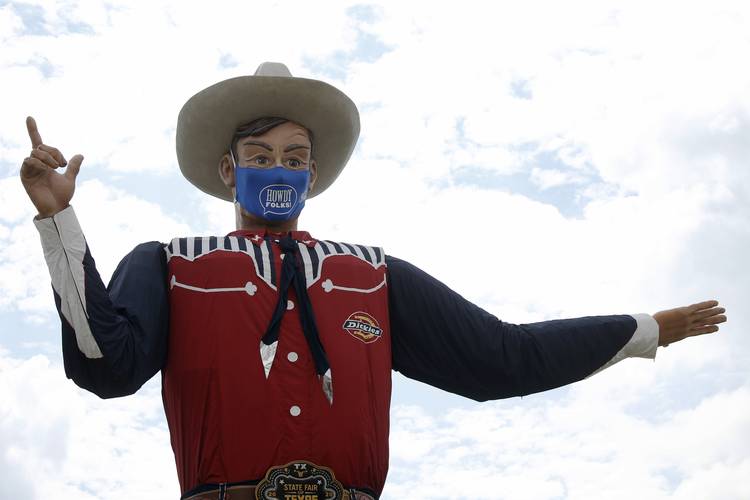 Big Tex sports a howdy folks face mask at Fair Park in Dallas on Tuesday, September 16, 2020. The mask is 84 inches by 45 inches or roughly 7 feet by 4 feet. The State Fair of Texas has been cancelled this year due to the global pandemic. The State Fair of Texas will open on weekends selling drive-thru fair food and photos with Big Tex in September and October. (Vernon Bryant/The Dallas Morning News)

First, get a corny dog. OK, now let’s address what will possibly be the strangest Texas-Oklahoma game ever.

Sorry, folks. Big Tex isn’t welcoming you to the State Fair of Texas this year because of the pandemic. Somehow, we must survive without turkey legs, cotton candy, new tractors and test driving a Chevy.

The Cotton Bowl will be at 25% capacity due to health restrictions. The bands will stay home. Both schools distributed 12,500 tickets for a stadium that holds 92,100. It’s a fraction of the normal crowd, though there’ll be plenty of folks throwing the Horns Down or shouting “OU sucks.” An apocalypse couldn’t mask those spirits.

“Probably the thing I will miss the most is the drive, the bus ride through the crowd, through the State Fair into the stadium,” UT coach Tom Herman said.

For the 116th time, the Longhorns and Sooners will meet Saturday in Fair Park, but where are these programs truly headed? The 2 1/2-point ranked underdog has the senior quarterback while the favorite has lost back-to-back Big 12 games for the first time since 1999.

Simply put, this Red River Showdown feels like a test of legitimacy for Herman. If the Horns can’t beat the struggling Sooners with veteran Sam Ehlinger at the controls, when will Texas ever get over the hump?

Ehlinger sure knows his team stands at a crossroads. Texas gave away a potential win last week against TCU, falling 33-31. Too many penalties, some defensive miscues and a back-breaking fumble at the goal line all added up to disaster. This is not how the senior wants to spend what is widely expected to be his final season in Austin.

Ehlinger stood up in Sunday’s team meeting and spoke from the heart.

“There were a lot of different things addressed,” Ehlinger said. “I think the biggest thing was basically I just let them know that I want to win. It’s not necessarily about liking people, and not all leaders are liked. But being respected is more important, because you want to win. I was kind of challenging guys to understand that aspect of it, to step up and take ownership of the program and the details of discipline.”

Ehlinger said the Longhorns “have the talent, that’s not the issue. We get in our own way.”

“And we can eliminate that by being disciplined in every single thing that we do,” he added. “And disciplines is not a switch that you flip on Saturdays. Discipline is something that you work on every single day. And it starts with how you get out of bed in the morning.”

With Texas, it’s never a talent issue. It’s always about fundamentals and execution.

Coaches do not teach running backs to stick the ball out near the goal line, for fear it will get swatted away. Coaches teach offensive linemen to hold their ground, not escape the line of scrimmage early to draw unnecessary flags downfield. Coaches stress to defenders to keep your hands down while pressuring quarterbacks. The rules clearly state that any strike to the head will get flagged.

All of these mistakes were made last week against TCU, leading to fumbles, penalties and one ejection for targeting.

“I don’t want the narrative to be that I’m getting in guys’ faces,” Ehlinger said. “That’s not really it. I think it’s setting a standard that guys take ownership with.”

Oklahoma coach Lincoln Riley has street cred with his fan base after three straight appearances in the College Football Playoff. OU brought two eventual Heisman Trophy winners to this game in 2017 and 2018 and another Heisman finalist last season.

Now, Riley has turned things over to redshirt freshman Spencer Rattler, who’s looking to become only the third freshman in OU history to win this game in his first attempt. Justin Fuente (1996) and Sam Bradford (2007) are the only two previous Sooners to beat the Horns as a newcomer.

Rattler has completed 73.4% of his passes in three games with 977 yards and 10 touchdowns. But he’s also thrown four interceptions. By comparison, Ehlinger has completed 63.3% of his throws for 924 yards with 14 touchdowns and two picks.

“As far as his emotional state, his psyche, confidence, all that, he’s rock-solid,” Riley said. “He is. He’s a competitor. He knows he belongs in that arena.”

This game always serves as a mid-season measuring stick for both programs. But normally, both teams have four or five games under their belt by this point, too. Big 12 officials considered moving this game to the end of October but stuck with the traditional second Saturday of October.

That’s about the only thing normal about 2020.

Neither team would be completely eliminated from Big 12 title contention by losing this game. But a two- or even three-loss team would have a serious uphill battle ahead down the stretch.

Think this isn’t a rivalry? Herman mistakenly referred to this game at “OU-Texas” during his Monday press conference. The audio was included in a hype video posted by the UT social media department. It got such blowback for Herman not saying “Texas-OU” it was taken down.

The Sooners may have a new quarterback and a suspect defense, but they still wear crimson and cream. The blowback in Austin from losing to this bunch would be far worse.

Texas’ notable number: Oklahoma’s top receiver against the Longhorns — and the number 39

O’Brien fell into Texas’ lap, and Horns not complaining after sweeping Iowa State