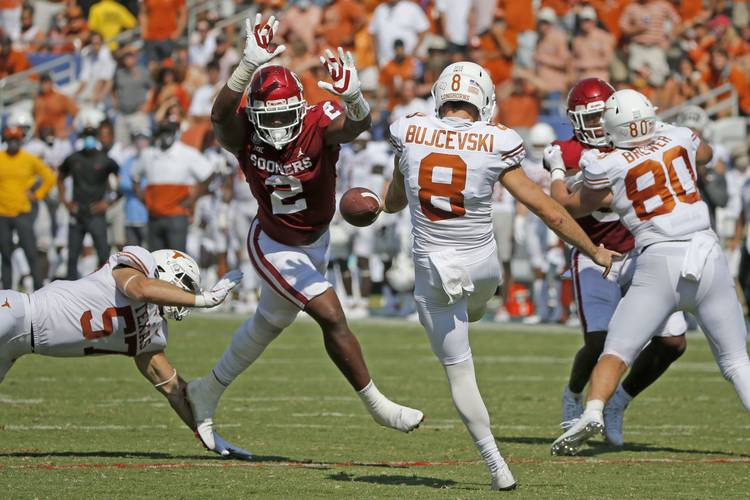 DALLAS — Due to restrictions for the coronavirus pandemic, only 24,000 fans were on hand at the Cotton Bowl to witness UT’s 53-45 loss to Oklahoma.

Many more were following along at home, though. One of those long-distance observers was former Longhorns punter Michael Dickson, who during the game took to Twitter to defend his successor (and cousin), Longhorns punter Ryan Bujcevski.

Punting was worth talking about. Oklahoma’s first three touchdowns were all set up by problematic punts. The Sooners scored four plays after UT junior Ryan Bujcevski shanked a 21-yard punt in the first quarter. A block of a Bujcevski punt set the Sooners up at the Texas 5-yard line in the second quarter. And after Texas’ first drive of the second half stalled, OU found itself in prime position after a 36-yard return ended with Bujcevski drawing an unsportsmanlike conduct penalty for a late hit.

Boulware was hired this offseason, so Dickson never played for him. But in a tweet that was later deleted, Dickson posted, “No protection. Week in week out. No coverage week in week out. ST coach is (trash). Smh.”

Dickson’s voice carries weight in the punting community. He won the Ray Guy Award in 2017, and he’s currently averaging 50.9 yards per punt with the Seattle Seahawks.

The criticism of coaching, however, was not out of bounds. Texas coach Tom Herman did the same thing after the loss. In his post-game press conference, Herman conceded that “(those mistakes are) all on coaching. When players don’t execute, coaches have to find ways to allow them to.”

For the season, Bujcevski is averaging 42.7 yards per punt. On Saturday, he pinned three of his seven kicks inside the Oklahoma 5. Herman reassured the media that Bujcevski will be Texas’ punter when the team hosts Baylor on Oct. 24. The backup punter on the depth chart is kicker Cameron Dicker, who hasn’t punted since his senior year of high school.

Herman expressed a disappointment with how his team covered punts, too; Texas surrendered 22- and 36-yard returns. As for the blocked punt, Herman said UT failed to get the proper leverage on its attempted block of Oklahoma’s David Ugwoegbu and Bujcevski held on to the ball for too long.

“I can’t tell you how many times we drilled our punt team this week. It is uncountable,” Herman said. “We’ve got to go back to the drawing board. This is something that has never happened in the six years that we have had this punt protection. But it’s happening now, and we’re not going to hide from it. We’re going to find a way to fix it.”

Sevens sit: It was expected that Texas would start two players who wear the No. 7 jersey on Saturday. Instead, both safety Caden Sterns and receiver Jake Smith sat.

Both were in uniform. Herman said Sterns had been dealing with an ailing foot. Smith, meanwhile, aggravated his hamstring during pregame warmups.

With Smith out, Texas had plenty of reps available in the slot for Jordan Whittington and Kai Money. Whittington hauled in a team-high 10 catches on 12 targets in his first action since he went down with a knee injury in UT’s opener. Money did not record any statistics, but the walk-on did draw a key pass interference flag during UT’s rally in the fourth quarter.

Texcetera: After his four-touchdown day, Texas quarterback Sam Ehlinger has now rushed for 12 career touchdowns against OU. The next-best career total for a Longhorn against Oklahoma is Ricky Williams’ five. … Running back Roschon Johnson, safety Chris Brown and cornerback Josh Thompson all exited with shoulder injuries. … Texas is 0-2 against Oklahoma in overtime. The Sooners needed OT to beat Texas 30-27 in 1996.

RELATED: Golden: Sam Ehlinger’s legacy at Texas takes a hit with his 1-4 career record vs. Sooners

Oklahoma 53, No. 22 Texas 45 (4OT): Another sloppy performance that Sam Ehlinger can’t completely save