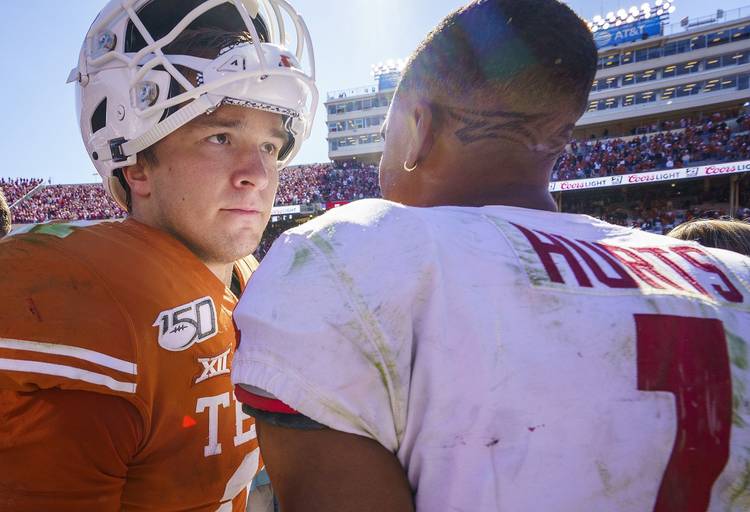 Five key matchups out of the Texas-Oklahoma game to keep your eye on Saturday:

Granted, these two gunslingers won’t meet head-to-head on the field, but everyone knows this game is all about the quarterback. Ehlinger is 1-2 in Dallas, having lost to Baker Mayfield, beaten Kyler Murray and lost to Jalen Hurts. He likes to do it all in this game, having accounted for nine touchdowns (three passing, six rushing) in the Cotton Bowl. Rattler hopes to join Justin Fuente (1996) and Sam Bradford (2007) as the only OU quarterbacks to beat Texas as a freshman. This will be the sixth time in OU history a freshman has started in this game. Rattler is tied for second nationally with 10 touchdown passes.

Nobody can truly understand the week Ingram has had around campus. He fumbled a potentially game-winning touchdown at the 1-yard line last week against TCU. But make no mistake, that error did not cost the Longhorns the game. A multitude of other mistakes did. Still, Ingram will look to bounce back. The only trouble is that OU’s run defense is off to a strong start this season. The Sooners are allowing just 85 rushing yards per game, the lowest figure in the Big 12, but should get a boost from the reinstatement of suspended end Ronnie Perkins. Texas’ run game has not performed well enough in UT’s first three games. Roschon Johnson (shoulder) also was injured last week against the Frogs.

Fortunately for Texas fans, CeeDee Lamb is now running through AT&T Stadium for the Dallas Cowboys. He can no longer terrorize the Longhorns at the Cotton Bowl. But Rambo is looking to have a big day. He’s tied for 10th in the league so far with 171 receiving yards in three games with two touchdowns. OU has also been leaning on tight end Austin Stogner, who has 11 catches. The Longhorns need to get more pass rush up front to rattle Rattler. Texas Tech had little trouble piling up yards, and UT is allowing 250.7 receiving yards per game. Joseph Ossai had a huge breakout game last week against TCU with double-digit tackles. He’s got to get home and rattle Rattler in the pocket.

Both teams have dependable kickers in OU’s Gabe Brkic and Texas’ Cameron Dicker. These games often hinge on special teams, and the Sooners’ punting has been so-so thus far. Mundschau has punted only five times, averaging 39 yards per boot. His UT counterpart, Ryan Bujcevski, is averaging 42.4 yards per punt with three going 50 yards or more. Jamison has already flashed incredible speed, like on his 98-yard kickoff return for a touchdown against Rice last season. He’s averaging 33.3 yards per return this season on only three attempts. Teams just aren’t kicking it to him. A huge return was wiped out last week against TCU, too. If you’re looking for a potential difference-making play, look for Jamison to do it.

The players change, the coordinators rotate but this game is a chance to measure both head coaches. These are the two glamour schools in the Big 12, and rivalry games always shape the narrative among the fan base. Riley’s Sooners have made three straight appearances in the College Football Playoff while Herman’s Longhorns haven’t won the Big 12 the last three years. Riley gets the benefit of the doubt; Herman doesn’t. What does it say that the Sooners have lost back-to-back league games and still come into the Cotton Bowl as the slight favorites? The Texas fan base has been grumpy about uneven play and the players dissing “The Eyes of Texas” school song. But a win over OU would bring the family back together again.