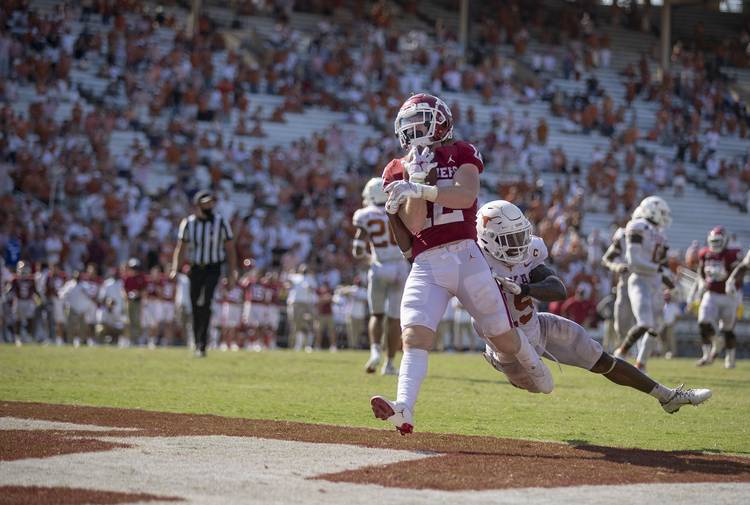 Oklahoma receiver Drake Stoops (12) beats Texas' Chris Brown to the end zone for the game-winning touchdown in a 53-45 win at the Cotton Bowl in Dallas on Oct. 10, 2020. [RICARDO B. BRAZZIELL/AMERICAN-STATESMAN]

There were 184 snaps taken in No. 22 Texas’ 53-45 quadruple-overtime loss to Oklahoma in Dallas on Saturday. Here are five that ended up making a big difference:

Oklahoma struck first and built a 10-0 lead by the end of the first quarter. Texas responded at the beginning of the second session, and a 15-yard run by quarterback Sam Ehlinger put the Longhorns on the Sooners’ doorstep. At the end of the play, however, UT center Derek Kerstetter was flagged for a late hit on an Oklahoma defender.

Had Kerstetter not been penalized for a personal foul, Texas would have faced a 4th-and-1 at the Oklahoma 2. Nobody at the Cotton Bowl would have been surprised if Texas would have elected to keep its offense on the field. Over Tom Herman’s first three years, the Longhorns went for it on 64 fourth downs. Over its first three games in 2020, Texas is 2-for-3 on fourth-down conversions. Against TCU two weeks ag, UT even scored on a fourth-down try.

Instead, Texas moved backward to its 16. The Longhorns settled for a 34-yard field goal by Cameron Dicker.

Texas fought back to force a 17-17 tie by halftime, but the Longhorns opened the second half with a fruitless possession. Texas punted and a 36-yard return and an unsportsmanlike conduct penalty on punter Ryan Bujcevski set the Sooners up for a quick score. Using two completed passes by Spencer Rattler and a 2-yard run by T.J. Pledger, Oklahoma needed only three plays to score.

Texas still trailed by 14 points before Joshua Moore hauled in a touchdown pass with 3:28 remaining. Texas, with no time outs left, failed to recover the onside kick, but Oklahoma couldn’t run out the clock. (The Sooners inexplicably threw an incomplete pass on a third-down attempt). That set up Texas at its own 16 with 1:52 remaining.

The touchdown served as redemption for Ingram. In a 33-31 loss to TCU a week earlier, the junior lost a fumble at the goal line with less than three minutes to go. The play that UT ran on Saturday was also similar to a sequence in last year’s loss to LSU. Ingram, however, dropped a touchdown toss on that fourth-down snap and Texas eventually lost, 45-38.

After Ingram’s catch and Ehlinger’s 25-yard touchdown run in the second overtime, Texas had a chance to end the game. Both times, UT opted to kick a game-trying extra point instead of attempting a decisive two-point conversion.

Under Herman, Texas is 5-for-7 on two-point conversions. The Longhorns had also gone for two and succeeded in each of its last two games. Against the Sooners, Herman played it safe even though he later said he had considered taking that risk on both occasions.

“We felt like our best opportunity was to continue to play ball,” Herman said when asked about kicking the extra point in the second overtime.

After both teams failed on their field goals in the third overtime, Oklahoma got the ball first in the fourth frame. On second down, Rattler found Drake Stoops for a 25-yard score. Rules required OU to attempt a two-point conversion, and Rattler connected with Theo Wease on that play.

Stoops’ father, of course, was the longtime leader of Oklahoma’s football program. Bob Stoops went 11-7 against Texas from 1999-2016.

“To be able to make a play like that for this team and a team from my hometown and all that, I mean it’s absolutely unbelievable,” Stoops told The Oklahoman. “Prayed for times like this.”

Texas had a chance to bounce back from Stoops’ touchdown. The Longhorns moved the football to the Oklahoma 9 before a holding penalty derailed the drive. Ehlinger then threw an incomplete pass and an interception to end the first quadruple-overtime game in UT’s history.

The Dotted Line: Texas commit Jordon Thomas ‘blessed’ to be back after injury