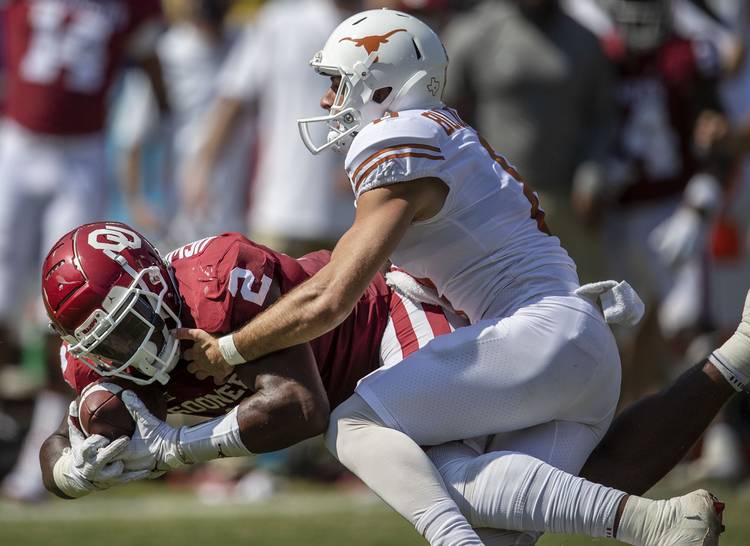 Oklahoma Sooners linebacker David Ugwoegbu (2) recovers a blocked punt on the one yard line against Texas Longhorns quarterback Casey Thompson (8) in an NCAA college football game at the Cotton Bowl in Dallas. [RICARDO B. BRAZZIELL/AMERICAN-STATESMAN]

DALLAS — The Monday before the Oklahoma game, Texas coach Tom Herman insisted that his team was improving.

“Any time you get better week in and week out, that’s progress,” he said.

Herman’s club has lost back-to-back Big 12 games, and fan vitriol is growing. Texas (2-2, 1-2 Big 12) is now out of the Associated Press Top 25 after getting as high as eighth in mid-September. Another year of high expectations is ruined by more mediocrity.

Don’t be fooled into thinking Saturday’s 53-45 quadruple-overtime Texas-OU game was some kind of thriller for the ages. “I told the team in there, the history of this game is as good as any in college football,” OU coach Lincoln Riley said afterward.

Not really. It was mostly five hours of sloppy football by both teams — 21 penalties and six turnovers combined. The game ended on a mistake, an interception thrown by UT’s Sam Ehlinger. The only reason Texas was in the game late was because of a poor decision by Riley. On a critical third-and-9, the Sooners chose to pass instead of run the ball and drain more clock.

“We’ve got an opportunity to still have a really, really good season,” Herman said at the Cotton Bowl.

History would indicate otherwise. All three of Herman’s previous UT teams have lost three more games after facing OU. Herman’s teams do not engineer come-from-behind wins when trailing at halftime (they’re 2-12). And the Horns are now 1-12 under Herman when trailing at the start of the fourth quarter.

Saturday marked the seventh time under Herman that UT was ranked and lost to an unranked opponent. Texas has the week off before hosting Baylor (1-1, 1-1) on Oct. 24.

Herman’s teams typically have solid offense and so-so defense. Now the special teams are a disaster with botched returns, blocked punts and blocked field goals causing havoc. That combination ultimately got Charlie Strong fired. The difference was that Strong had three straight losing seasons, an undefendable record no matter how well liked he was among the fan base.

If not for Ehlinger, would Herman’s teams be dramatically better? Texas is 10-7 since the Sugar Bowl win over Georgia that capped the 2018 season.

To be clear, this will be Herman’s problem to fix. Athletic director Chris Del Conte gave him a guaranteed contract extension after the Sugar Bowl season, stretching Herman’s deal out to 2023.

To change coaches, Texas would have to swallow about $25-30 million in buyout money to cash out Herman and his new assistants, who also have guaranteed deals. Any new coach would have Del Conte over a barrel and demand more years and more guaranteed money than what Herman got.

Herman and Del Conte are in this mess together. New UT president Jay Hartzell, considered to be a huge fan of athletics, is on the hook, too. This is all happening now on his watch. Hartzell is also a strong proponent of keeping “The Eyes of Texas” as the school song as well, a UT source said.

After last week’s loss to TCU, Herman said the team had an “unbelievable” practice the following Sunday. He stressed it again after Saturday’s loss.

“There was tons of accountability, tons of maturity and really, really had a great week of practice,” Herman said. “Now what we have to do is, we have to find a way, find a way mentally, to do the things to translate what we work on and we execute at a very high level and practice to do that in a game.”

Getting players to translate what they do in practice to the game is Coaching 101.

Herman said he believed the Horns played better against the Sooners than they did against the Frogs. “But the result didn’t bear the fruit of that because we still had too many (mistakes),” Herman said.

At least the Longhorns have more games ahead with Ehlinger. Yes, the senior will have one more year of eligibility due to COVID-19 rule changes. But few inside the football building believe he will return in 2021.

Maybe that’s another reason why Ehlinger stood front and center afterward for the post-game playing of The Eyes. He was the only player facing the UT fans in the north end zone, although two others were standing near the sideline with the Horns Up.

Asked about the pressure of carrying the university, Ehlinger said, “It’s no pressure at all. You know, I’m truly humbled and blessed to be in this position. I wouldn’t trade it for the world. And I love this university. I love this football team. And I just want I want to win.”

There simply hasn’t been enough of that under Herman.

Texas report card: Red River rivalry loss was a mixed bag, and the grades show it