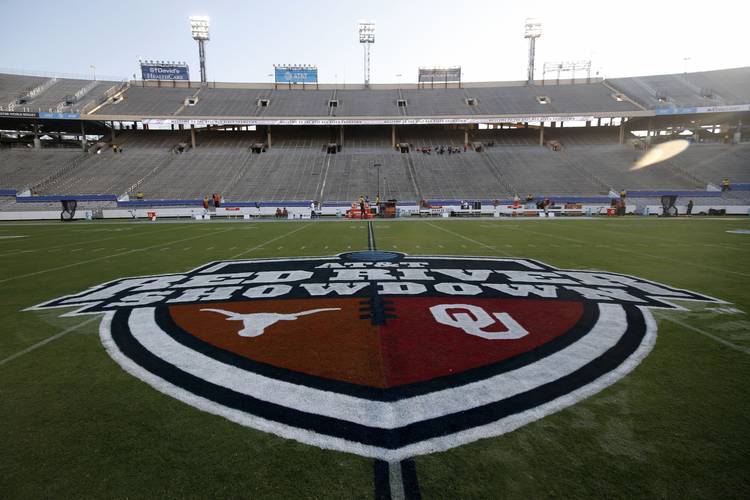 The Red River Showdown logo is shown on the field of the Cotton Bowl, prior to an NCAA college football game between the University of Texas and Oklahoma, in Dallas, Saturday, Oct. 10, 2020. (AP Photo/Michael Ainsworth)

The off week comes at a good time — for Texas and for Texas fans. Saturday’s 53-45 loss to Oklahoma was the Longhorns’ second overtime in three games, and while it felt like things were shaping up to be another Lubbock miracle, Texas fell in the fourth overtime. Texas (2-2, 1-2) fell out of the Top 25 on Sunday and hosts Baylor on Oct. 24.

As brilliant as Sam Ehlinger was in the closing minutes of the fourth quarter and throughout overtime, his first three quarters of work were too erratic. The stats were great — 399 total yards, six total touchdowns — and just like at Tech, he rallied the Horns from two touchdowns back in the closing minutes. He put the team and the game on his back and willed Texas to as far as it got. But he struggled all day with downfield throws, unable to connect with his targets, and his second pick of the game also ended the game. He fell to 1-4 all-time vs. the Sooners.

Go figure: Ehlinger has accounted for 21 touchdowns through the first four games

On paper, the running game averaged 4.1 yards per carry, produced four touchdowns and had 141 yards. Take away what Ehlinger did, and those numbers drop to 2.6 yards per carry, no touchdowns and 29 yards. The only things preventing a failing grade were Bijan Robinson’s 26-yard catch and run and Keaontay Ingram’s short touchdown catch with 14 seconds left to force overtime. It’s not all the running backs’ fault — we’ll address the offensive line later — but as a group, it definitely was the worst showing of the season for Ingram (3-15), Roschon Johnson (3-minus 3) and Robinson (5-17). Texas had 87 snaps — the Horns went with a pass 53 times.

Go figure: Ehlinger has 5 of the team’s 7 rushing TDs; Ingram and Robinson are still looking for their first rushing score

Jake Smith was a pregame scratch, but Jordan Whittington, who’s been out since getting hurt in the opener, stepped right in to lead the Horns with 10 catches for 65 yards out of the slot. He was targeted a team-high 12 times, one more than Joshua Moore, who had another nice day with 8 catches for 83 yards and a touchdown. Ehlinger’s accuracy issues impacted the receivers’ final numbers; Brennan Eagles was targeted six times but had only three catches, Bijan Robinson had five targets but only two receptions and Tarik Black had four targets but only one catch. Ehlinger’s fateful interception on the final play was an overthrow to Black in the end zone.

A week after having a nice game against TCU, the tight ends didn’t figure much into Saturday’s game plan. Jared Wiley had a couple of grabs, but they went for only 14 yards, and Cade Brewer didn’t record a catch but did draw a pass interference call close to the goal line.

Most of the line’s troubles stemmed from the fact that Oklahoma controlled the line of scrimmage: The running game could not get going, Ehlinger was sacked six times and hurried seven other times, and the Horns had five three-and-out drives — three coming on consecutive drives in the third quarter. The rest of the line’s troubles were all of the linemen’s making, in the form of costly penalties. Derek Kerstetter’s unnecessary late hit wiped out an Ehlinger scramble to the goal line on third-and-16 — Texas instead settled for a field goal. And Junior Angilau missed his block on OU’s blocked field goal in the third overtime and also flinched for a false start on a fourth-and-2.

The pass rush has been a struggle all season. Texas had only one on Saturday in a game where Oklahoma was starting a freshman in this matchup for only the sixth time. Spencer Rattler, a redshirt freshman, looked shaky on the opening drive and was benched in the second quarter. Like the offensive line, OU controlled things up front against Texas’ line. The Horns had the one sack but also only one hurry. T’Vondre Sweat forced Rattler’s second turnover on a rush and Joseph Ossai had a strong stat line — 10 tackles, a half-sack, 2 tackles for loss and a forced fumble. He may be heating up; he forced a fumble and got his first sack of the season two weeks ago against TCU.

The linebackers made plays. DeMarvion Overshown had his best game yet since moving over from safety, picking off a Rattler pass and returning it inside the red zone on the final play of the first quarter. That set up UT’s opening score. He also snuffed out a second quarter reverse run play and saved a breakaway run down the sideline with a first-quarter shoestring tackle. Juwan Mitchell bounced back fine from his TCU targeting ejection, plucking Rattler’s fumble out of the air. But he also prevented Rattler from throwing a quick pass at the line to his outside receiver, jumping up to make Rattler think twice and hold onto the ball just a little longer, which let Sweat force the fumble.

Go figure: Overshown’s 11 tackles — that was second-most on the team — moved him from fifth to second on UT’s season tackles chart

Caden Sterns, who led the team in tackles against TCU, missed the game with an injury. He was replaced at free safety by B.J. Foster, who ended up leading the team with 13 tackles. He was active all afternoon, separating Charleston Rambo from the ball on a pass out of the backfield on third-and-goal; OU could have gone up 7-0 but instead settled for the 3-0 lead. That was a four-point play from Foster. Chris Brown had nine tackles and recovered a fumble inside the red zone, killing a Sooners scoring opportunity. And Rambo, who was expected to be OU’s most dangerous receiving threat, was held in check with two grabs on seven target.

Oklahoma 53, Texas 45: Our five questions for the Longhorns — answered