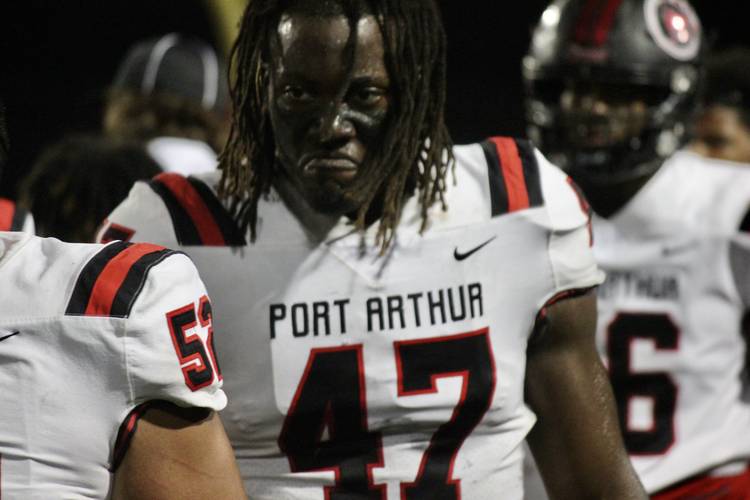 Port Arthur Memorial defensive end Jordon Thomas is excited to be on the field as a senior after missing his junior year with an injury. (Mike Craven)

LA PORTE  — Injuries can be a blessing in disguise for a young football player. Port Arthur Memorial defensive end Jordon Thomas missed his junior season with a leg injury. The Texas pledge was back on the field last Thursday against La Porte as Memorial moved to 3-0 on the season with an easy road victory. Thomas, a four-star end and a member of the Fabulous 55, appreciates the opportunity to play in 2020 more than most.

“Using football as a metaphor for overcoming adversity started during the process of coming back,” Thomas said. “I started reminiscing about everything that happened to me and used it as encouragement. Football is mostly mental. If you have a strong mind playing football, you can prevail against any team.”

Thomas was all smiles after last week’s win. He posted six tackles, 1.5 sacks and forced a fumble that was returned for a touchdown. He also blocked a punt.

“It is a blessing just to show up on this field and play my last year because everyone knows last year I had (an injury),” Thomas said. “I’ve improved as a pass rusher. It’s gotten better. I take it day by day and practice hard.”

Thomas picked Texas in May over strong interest from Texas A&M. The 6-3, 240-pound prospect is the 15th-ranked weak-side defensive end in the country, ranking 224th overall in the cycle according to 247Sports’ composite ratings. Thomas was a second-team all-district selection as a sophomore. He checks in at No. 27 on the Fab 55. He’s a high-motor edge player with enough size to play some defensive tackle in passing situations. The Longhorns earned his commitment because of the environment and state pride.

“It was the family environment. Plus, I can represent the state of Texas,” Thomas said. “It really touched me when Tom Herman said ‘state on the front, family on the back.’ I hadn’t heard that before.”

Family was everything for Thomas.

“My main concern in recruiting was how a school was going to benefit me and my family,” he said. “Texas showed me how it can help me in my future.”

Thomas isn’t the only future Longhorn on the Memorial team. Junior cornerback Jaylon Guilbeau is one of three 2022 prospects pledged to the Longhorns. The four-star is a future member of the Fabulous 55. He gave his older teammate a glowing review after the win.

“Jordon brings the energy to football. He keeps the team hype and he gets us to keep our head up after mistakes,” Guilbeau said. “I love being on his side.”

Thomas also earned a ringing endorsement from his head coach.

“His motor is through the roof,” Memorial’s Brian Morgan said when Thomas committed in May. “He loves physical football. He’s a great vocal leader and a guy that I know is thirsty to learn how to be a better football player.”