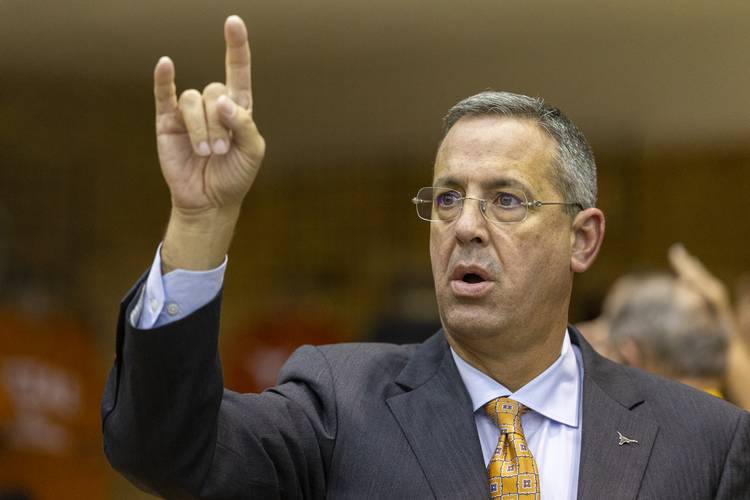 In his weekly letter to fans, Texas athletic director Chris Del Conte said he’s spoken with coaches “outlining my expectations” that teams show appreciation to fans by staying on the field as a unified group during the playing of “The Eyes of Texas.”

Staying on the field for The Eyes is not mandatory, at least it’s not understood to be mandatory in Del Conte’s letter. The athletic director said this summer that players are not required to sing The Eyes anymore.

UT football players left the field quickly before the post-game playing of The Eyes at the first two home games. Standing together while the Longhorn Band plays the school song has been a post-game tradition for decades.

On Saturday against Oklahoma, the majority of players went into the Cotton Bowl locker room after shaking hands with OU players. Quarterback Sam Ehlinger and a few others stayed back to sing with their Horns up. The visual of Ehlinger out there by himself created a public-relations nightmare for the university with donors and fans.

“Many of your questions have been about our student-athletes and the confusion about why they have not remained on the field for ‘The Eyes of Texas’ after the games,” Del Conte wrote. “I, like so many of you, view the song with pride and sing loudly and proudly in honor of the efforts of those who represent and support this phenomenal institution.

“As much as our student-athletes love this university, they have questions about the history of ‘The Eyes’ and concerns about it,” he added.

Del Conte reiterated that UT President Jay Hartzell announced that The Eyes will remain the school song. Hartzell has formed a committee that will assemble a full history about the song’s origins dating back to the early 1900s. During that time, the song was performed by white singers in blackface at minstrel shows.

“We believe it is important to understand the history as we continue to perform it,” Del Conte wrote. The committee is expected to complete its work by January.

“With that said, I do want to clarify that I have had many conversations with our head coaches outlining my expectations that our teams show appreciation for our university, fans, and supporters by standing together as a unified group for ‘The Eyes,’ while we work through this issue,” Del Conte wrote.

“However, like all families who see the world through different lenses, we have plenty of work to do on this subject and will continue to do so,” he added. “But rest assured, our student-athletes love and respect this University very much and are competing their hearts out for it.”

Texas coaches are caught between a rock and a hard place on this issue. They support Black players who have spoken out on social justice issues, but at the same time, they must follow the guidance of their bosses. Everything affects recruiting. Herman started his Monday press conference by reading a prepared statement about The Eyes.

“There are very strong emotions on both sides,” Herman said, reading from a piece of paper. “As a football program, we’ve discussed this and will continue to. I’ve encouraged our staff and team to join me in participating after games, if they are comfortable doing that. I do believe it’s important that we acknowledge and thank our fans after a hard fought game.”

Herman is the most high-profile coach on campus, but other coaches will face questions about how they’re handling The Eyes. How they handle issues in the locker room and with the public will be a tricky tightrope walk.

“We just don’t feel super comfortable singing it, like personally as a Black athlete, and my teammates support me in that and they kind of felt the same way,” UT volleyball star Logan Eggleston said after a recent home match.

Texas safety Caden Sterns appears in a YouTube video titled “The Eyes of Texas is racist.”

Speaking of minstrel shows, Sterns says in the video, “That right there alone is not OK. Knowing that your school used to host those shows is kind of beyond me.” The video ends with several full-screen graphic cards, including one that reads “UT needs to listen to Black students.”