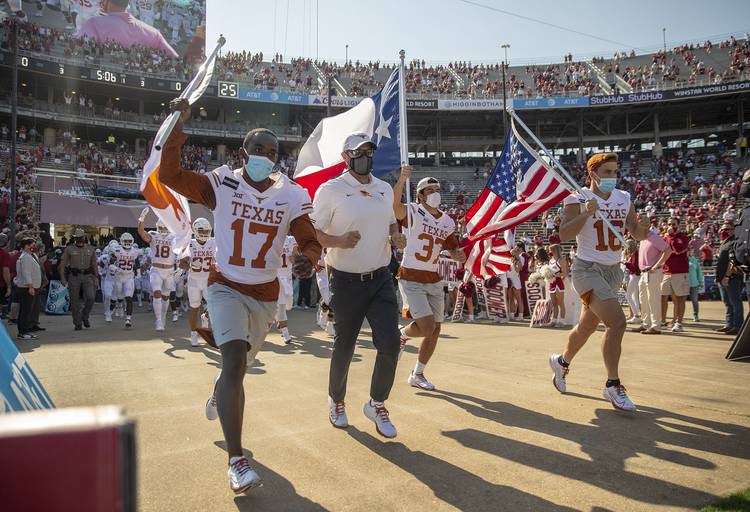 Texas coach Tom Herman leads the Longhorns onto the field at the Cotton Bowl in Dallas on Saturday, Oct. 10, 2020. [RICARDO B. BRAZZIELL/AMERICAN-STATESMAN]

Mothballing the Whys of Texas mailbag seemed like a good idea this season. People don’t send emails anymore. It’s the electronic pen and quill, and who’s got time to dabble in the electronic ink?

Most people prefer being catty in my Twitter mentions, all while staying anonymous, of course.

And then came “The Eyes of Texas” controversy.

Texas fans aren’t sending in that many emails to complain about the 2-2 start. Nor are they really complaining about play-calling or the missed tackles anymore. Apathy is setting in on those fronts, it would seem.

The avalanche over The Eyes is something different. And it appears to be an issue that many either don’t fully understand or want to bend to their own personal beliefs. We’re supposed to keep politics out of sports, but this blurs the line in ways few issues can.

And let’s be specific about who’s mad. We’re talking about donors, season ticket-holders and Texas exes of all ages. Those are the people who spend thousands every year to watch and support the Longhorns. It’s money critically needed to fund a $225 million athletic department budget.

I’m not rehashing the song’s history here; that has already been documented. UT President Jay Hartzell has asked a committee to come up with a complete history about The Eyes and have it finished by January. Until then, all UT officials are trying to stand back and avoid making public comments.

Some points do need to be made clear:

That said, we now live in politically charged times. It’s practically hostile. I’m right; you are wrong. There is no middle ground anymore, it seems.

It’s clear that top UT administrators were banking on the football team being good this season to sort of mask The Eyes controversy. After all, Herman has a senior quarterback, big money was spent on seven new assistants and Oklahoma was down, right?

People would complain about The Eyes even if Texas was 4-0. But at least the Horns would be undefeated and in the College Football Playoff chase.

Well, these Longhorns should feel lucky they’re not 1-3. Instead, they’re .500 after back-to-back Big 12 losses — one to a double-digit underdog and another to a team with a redshirt freshman quarterback who got benched in the middle of the game.

Nothing’s ever easy around here. Why should 2020 be any different?

Your eyes do not deceive you. This offensive line is struggling. OU got six sacks last Saturday as Ehlinger was doing his best Houdini act to escape pressure at times. It was known before the season that the right side was a major question mark. Guard Denzel Okafor had never played on a full-time basis and tackle Christian Jones was unproven. What coaches didn’t expect was for left guard Junior Angilau to have multiple mistakes, like false start penalties on fourth-and-short and getting pushed back on blocked field goal attempts. They didn’t expect center Derek Kerstetter to shove OU players in the back late on running plays. The only player who hasn’t drawn scorn is left tackle Samuel Cosmi, who’s still considered a first-round draft prospect next spring.

Q. The University of Texas at Austin football program has the biggest sense of entitlement this side of the New York Yankees. So, the last 48 hours have been fun to watch.

I’m guessing you’re a Texas A&M fan. Did the Aggies do anything notable this past weekend?

Q. I have been a fan of Texas for over 40 years, and never have I been so upset with the school leadership, its coaches and its players. On the weekend Texas A&M has a historic win over No. 5 Florida, our wimpy team lost its worst game against what once was our greatest rival. How does Herman expect to hold onto or attract future recruits when the team has elected to be divided over partisan politics rather than playing team football?

I follow recruiting on a casual basis during the season. Frankly, ever since the creation of the transfer portal, players can come and go like the wind. But even I know that when it comes to the 2021 recruiting class, things aren’t going so well. Herman’s program missed on the Brockermeyer twins, two legacies that theoretically know everything about UT. Four-star athlete Billy Bowman Jr. also just decommitted. The current class is ranked 17th nationally, according to 247Sports’ composite rankings.

Q. I am sorry to add to what I am sure is a flood of emails you get on this topic. I just want to point out that from my perspective, many Texas fans favor moving on from The Eyes of Texas as the school song. I think it is a mistake both by the athletic department and the Statesman to paint “the fans” as unilaterally in favor of continuing to play this song.

When I was a student back in the 90s, I witnessed many acts of overt racism. I am embarrassed to say I didn’t do much about them, if anything. I still see some of the perpetrators of these acts at University events. I suspect some of these folks are the same people shouting so loudly to keep the song. Luckily, I don’t have to listen to them anymore. Whatever the cost of cutting ties with these folks has been to me personally, it was worth it. I hope the UT athletic department can come to this same conclusion.

To say that “all” Texas fans are on board with keeping the song is indeed wrong. There are some who believe it should be removed because of its origins. Full stop. It’s just they aren’t as vocal about it. I don’t pretend to know what it’s like for a Black student to attend UT. We are all influenced by our own experiences.

Q. Since they are thinking about defunding police departments, they need to do the same with the Texas football program.

It’s simple. If you don’t like what’s going on at UT these days, you vote with your wallet. Don’t buy the tickets, give up your seat license and stop wearing the shirts.

Here’s something UT administrators should think about. The school has gone to a 25% stadium capacity this fall because of the pandemic. So that means a lot of fans are getting used to watching the games at home and avoiding the hassle of parking, crowds, etc. How many of them will simply opt to never come back?

Q. Karma has not been kind to UT for a few years. Maybe there is a correlation. Show a little humbleness post game. Provide credit to the other side for the ‘sage’ old adage of give some credit where its due. It can’t always be “we are better than they are but”, “we have more talent than we displayed”, “we just didn’t play well”, “we just have to stop the errors”, “we just shot ourselves in the foot”, or any of the other we, we, we, we comments (excuses?). Not always, but most of the time in sports, the other side has quite a bit to do with how you play.

That’s true, but it’s not how college coaches think. Some believe it’s never about what the other team does. How did you respond to whatever it is they did? If the defense did this, you’re supposed to do that. Now, I do understand your point, and there’s no question sometimes you just have to tip your cap to someone who makes a great play.

Q. Is there any way Sam Ehlinger would consider coming back for a 5th season at UT? He could endear himself to Longhorn fans everywhere, refine his passing skills for the 2022 NFL draft, and leave with every imaginable UT quarterback record, never to be broken. On the other hand, Sam just might want to free himself ASAP from the mess that is UT football, both on and off the field.

I’ve been asked this a lot, and yes, Ehlinger could return for 2021 because of the NCAA’s COVID-related rule changes. Honestly, I do not expect that to happen. This is likely to be his final season. He’s taking only one class this semester, I believe. Next year, it’ll be the Casey Thompson or Hudson Card or Ja’Quinden Jackson show.

Q. The players came to Texas because they wanted to play for Texas and to get an education. They did not come to change tradition. If the player had a problem with Texas tradition, then they should transfer! Texas should only recruit player who want to honor the tradition and play for the university. Herman should discuss the tradition to all recruits before he offers them a scholarship. All the players for past teams support the tradition and upset with the present plays disrespect of tradition.

It won’t shock me if Herman talks with recruits about The Eyes going forward. Then again, it sort of depends on what the president’s committee decides in January, too. Then again, you’ll have some recruits who simply want to have a the big-school experience and will commit to Texas no matter what. Remember, this is a competitive business. Five-star players can use anything to pick a school or eliminate a school from his list.

Q. Send them all to other schools — except Sam — and let the chips fall where they may. As a Texas ex, loved the place, but today would not want my children going there.

Let everyone transfer? What’s wrong with the campus?

Q. I don’t know if you’ve explored this elsewhere but is average penalties per game a reasonable indicator of performance? For example, UT under Herman averages around 7 penalties per game through last season. It seems likely this season will be about the same. Given that trend (assuming the data is correct) is it reasonable to think the penalty issue is “fixable” or even the real issue?

Teams are always a reflection of the head coach, regardless of sport. On Monday, Herman indicated he will start punishing players for undisciplined penalties. All I know is that you can’t push players in the back on any level of football. You can’t trash talk and push players after the whistle on any level, either. So let’s skip the mea culpas about how players got caught up in the moment against OU. That’s undisciplined football. There’s no other way to say it.

Q. Remind me why UT fired football coach Mack Brown. Coaches Strong and Herman have not come close to matching Mack’s annual wins at Texas. UT Athletic Director Chris Del Conte extended Herman’s contract so we are stuck with him for two extra years (until 2023). Meanwhile at the University of North Carolina, Mack quickly turned around this losing team and they are winning their big games.

Q. To paraphrase Yoda, Stand or don’t stand, the eyes of Texas remain on you.

Texas AD to coaches: Longhorns athletes are expected to be a ‘unified group’ during The Eyes