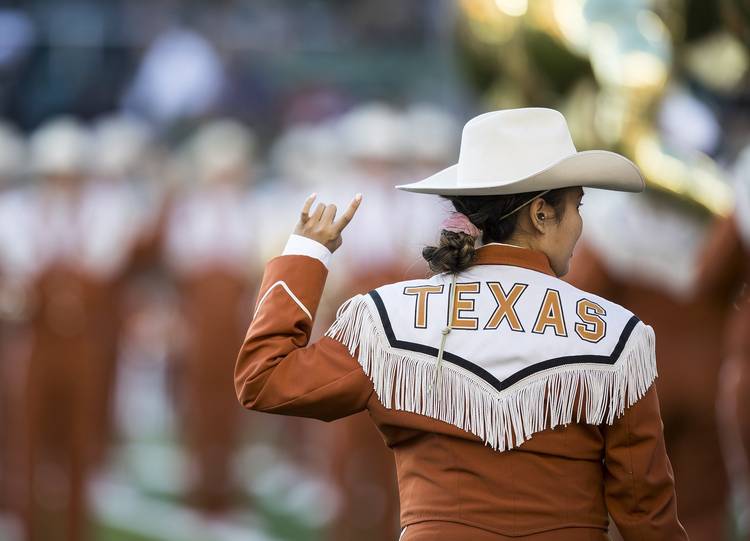 Texas Longhorns band take the field for half time during an NCAA football game in Waco, Texas on Saturday, November 23, 2019. [RICARDO B. BRAZZIELL / AMERICAN-STATESMAN]

The University of Texas marching band, long known as the “Showband of the Southwest,” may not perform again this season if band members can’t come to some agreement about playing “The Eyes of Texas.”

A university spokesman confirmed Wednesday that the Longhorn band will not perform during Saturday’s game against Baylor. Nobody wanted to use the word suspended, but it’s clear the band will not be back on the field anytime soon.

On Wednesday, The Daily Texan reported that band members responded to an internal survey asking whether band members would play the now-controversial school song. Band director Scott Hanna told members the band did not have the “necessary instrumentation, so we will not participate in Saturday’s game.”

The band is “fairly evenly divided in opinion,” Hanna wrote to band members, according to the school newspaper. “Moving toward resolution takes time and sustained effort. The conversations that have started are an important step toward that goal.”

News of an internal survey caught high-level administrators off guard, two UT sources told the American-Statesman. Those in the administration thought this issue had already been decided.

“We are continuing to work with students in the Longhorn Band to maintain the musical traditions of The University of Texas, including ‘The Eyes of Texas,’ ” a university spokesman told the Statesman.

Late Wednesday, UT President Jay Hartzell issued a statement that said the song will continued to be played “at future games and events.”

“While we would love the band to be with our fans at all our games, we never planned for them to perform live this Saturday,” Hartzell said. “We knew this summer that, as we make our campus a more welcoming place, we would face many hard conversations. I remain truly optimistic that we will find ways to join together around our song, which has been so positive for so many Longhorns over the past 120 years.”

In late September, the university released a letter from the dean of the College of Fine Arts. The band could not play for the TCU game because of COVID-19. Beyond that, it was unclear.

However, “we clearly also need to have more reasoned and informed discussion about the Eyes of Texas before the band can continue with its public performances,” Douglas Dempster wrote.

By conducting an internal survey, “The Eyes” sparked another round of bad headlines, something the university is desperately trying to avoid. A massive PR nightmare thought to be ringfenced in the athletic department is now spreading to other parts of campus.

The century-old school song has become a flashpoint for its origins dating back to the early 1900s. Some have made short-lived attempts to get the song changed over the years, but this recent push started in earnest this summer as social justice issues came to the fore.

RELATED: A history of ‘The Eyes of Texas’: Song performed at minstrel shows is now part of every-day UT life (June 12, 2020)

Athletic director Chris Del Conte is facing donor upheaval because football players have not stayed on the field for the post-game singing of “The Eyes” at home games. Football coach Tom Herman said Monday he has encouraged players to stay even though it’s not mandatory.

“I would definitely say it’s been more of a distraction,” defensive tackle Ta’Quon Graham said on Tuesday. “I thought we were past this point, past the issues surrounding the song. I thought we were just focusing on the season.”

Now, Longhorn Band members are divided on the issue. “All of us on staff will do everything we can to create and maintain space for conversations,” Hanna said in his internal message, according to The Texan.